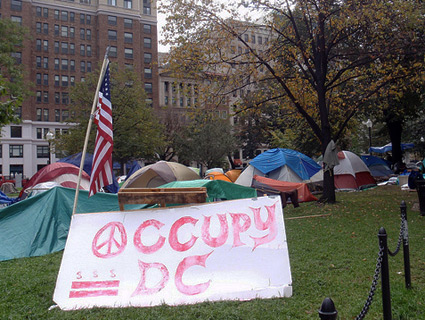 Are the people living on the spit of grass at McPherson Square, under the banner of Occupy DC, protesters or merely “campers”? It’s an important distinction. The National Park Service can tell campers to take a hike, but must allow protesters to exercise their First Amendment rights.

On Tuesday, House Republicans held a hearing designed to investigate the decision to “allow indefinite camping in the park,” where occupiers have been, er, camped out since October.

They hauled in members of the DC government, including police chief Cathy Lanier and Department of Health director Mohammad Akhter, to help make their case that the park service has improperly given the occupiers license to do what other citizens can’t—namely, pitch a tent on federal space for as long as they wish.

Officially, the hearing had been prompted by health concerns at the park, including rat-infested tents, fire risks, and, in one troubling case, a 13-month-old child who’d been abandoned in a tent. But the proceedings quickly turned into a debate over the definition of “camping.” The hearing’s primary punching bag was the director of the National Park Service, Jonathan Jarvis, whose agency has jurisdiction over the small park in the middle of downtown DC. GOP lawmakers needled him, insisting that he parse the difference between holding a vigil and simply camping.

Rep. Trey Gowdy (R-S.C.) asked if he could tell his constituents back home that they are welcome to come to DC and pitch a tent wherever they please. Or, he wondered, would members of the US Chamber of Commerce or the National Federation of Independent Businesses, folks on the other side of the Occupy fight, also be allowed to make camp in McPherson Square?

“Are there certain constitutionally protected forms of sleeping, or have you engaged in selective prosecution?” Gowdy wondered.

But Jarvis was an unexpectedly forceful First Amendment champion. He repeatedly told his inquisitors that his job was simply to protect the free speech rights of the protesters. Absent an emergency, he said, the Occupy protesters must be allowed to stay in the park.

But the Republicans were unmoved, convinced that some deeper political agenda lurked behind the agency’s refusal to give occupiers the boot. “I feel that the park service has entered into an ideological fray,” remarked Rep. Darrell Issa (R-Calif.).

He pointed to the anti-abortion protesters who’d descended on DC on Monday for a rally timed for the 39th anniversary of Roe v. Wade. “Yesterday, right-to-life protesters came, they protested, they left.” Issa suggested that the park service should have escorted the McPherson Square riff-raff out of the park at gunpoint if necessary, as it does in other national parks when people stay after dusk. He said protesters are welcome to hold a vigil, so long as it doesn’t involve any camping. “Stay awake, stay vertical, stay as long as you want,” he said. “If you need to sleep, go away and come back later,” he said.

For the members who hadn’t witnessed the conditions at McPherson Square first hand, Rep. Joe Walsh (R-Ill.) had dispatched some of his staffers to take video, which Walsh played for the committee. One young man, who was also at the hearing, looked into the camera and said, “I’d like to invite all our brothers and sisters all over the nation who’ve been kicked out of their own occupations: Please feel free to come on down to DC, our doors are wide open. We’d love to have ya.”

The video highlighted one of the most serious problems with the DC Occupy protest. Many of the remaining occupiers appeared to be impaired homeless people. Rep. Danny Davis (D-Ill.) asked Jarvis how the park service discerned between bona fide protestors and the homeless. Jarvis admitted that homeless people were taking advantage of the protest to take up permanent residence in the park, and that his agency had been working with the DC health department to address the issue. He also promised Issa that the park service would soon be cracking down on the illegal campers, though he couldn’t say exactly when that might happen because they were still working out the details.

Overall, Democrats on the committee seemed pretty dismayed that their colleagues on the other side of the aisle were holding this hearing to begin with, instead of addressing some of the issues causing occupiers to occupy. For instance, said Rep. Elijah Cummings (D-Md.), wrongful foreclosures and abuses by mortgage servicing companies. “People in Occupy look at a hearing like this and say this is why they’re protesting,” he said. “It’s a damn shame. People have come because they are concerned about what government is not doing. If we address this stuff we won’t have to worry about another Occupy.”