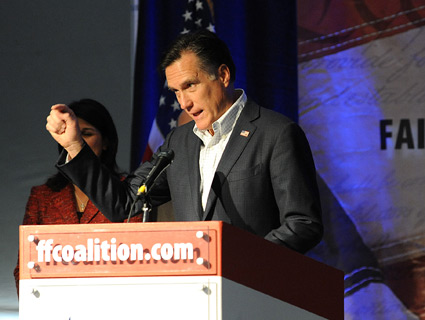 If you watched Monday’s Republican debate in South Carolina, you might have noticed that brief moment when Mitt Romney threw one of his foreign policy advisers under the bus.

When the discussion turned to the Afghan War, one of the Fox News moderators mentioned that one of Romney’s advisers had written frankly about the grim reality of negotiating with the Taliban. When asked if he believed his own advisor was wrong on the subject, the Republican front-runner responded with a definitive and dismissive “yes.”

The right course for America is not to negotiate with the Taliban when the Taliban are killing our soldiers. The right course is to recognize they’re the enemy of the United States. It’s the vice president who said they’re not the enemy of the United States…The right course for us is to strengthen the Afghan military force so they can reject the Taliban. Think what it says to the people in Afghanistan and the military in Afghanistan, when we’re asking them to stand up and fight to protect the sovereignty of their people, if they see us, their ally, turning and negotiating with the…Taliban.

Romney also reassured the South Carolina audience of just how tough he would be as commander in chief, saying, “of course you take out our enemies, wherever they are. [The Taliban] declared war on us… We go anywhere they are, and we kill them.”

The adviser in question is Mitchell Reiss, current president of Washington College. Reiss, a former envoy for the Northern Ireland peace process under George W. Bush, served as an adviser to Romney’s 2008 presidential campaign. In late 2011, he was announced as one of the 2012 campaign’s “special advisers,” along with figures like Norm Coleman and Walid Phares.

Really, what Reiss has written on possible negotiation with Taliban elements echoes mainstream thinking on the issue. In a piece for the Baltimore Sun published in December 2010, he acknowledged that, “as Gen. David Petraeus and others have said, we cannot kill or capture our way to victory when faced with a terrorist insurgency. At some point, we need to talk.”

And in his piece titled “Negotiating with evil,” posted at Foreign Policy on January 11, Reiss leads with the following:

There are always risks in talking with any terrorist group, and the Taliban are no different in this respect. Most knowledgeable observers believe that the Afghan security forces, individually or with the assistance of the U.S. and ISAF, will not be able to defeat the Taliban on the battlefield, at least anytime soon. This means that some type of negotiated solution is the best near-term bet to halt the fighting.

Furthermore, the piece in question is not exactly uncritical of President Obama. Reiss makes it clear that he believes that “the Obama administration may have an unrealistic notion about the time-frame needed to have this inchoate process yield tangible results.” His analysis continues:

The administration’s challenge would have been made less problematic if it had pre-wired some type of gesture or concession from the Taliban, such as a temporary cease-fire in a province or region. Perhaps one is already in the works and will be forthcoming in the weeks ahead. But until then, the administration appears to be more eager for the talks than the Taliban—never a strong negotiating position.

Essentially, this is a toned-down version of what Romney said during that same South Carolina debate, in which the candidate remarked, “And now [Obama] wants to negotiate from a position of extraordinary weakness? You don’t negotiate…with your enemy from a position of weakness as this president has done!”

Of course, it’s not at all unexpected that Romney would decline to publicly recognize the legitimacy of such an exit strategy; it’s merely another instance of the Republican contender ducking nuance and going for the cheap, primary-season applause line when it comes to foreign policy.

It’s just not every day that you hear him slamming one of his own advisers in the process.