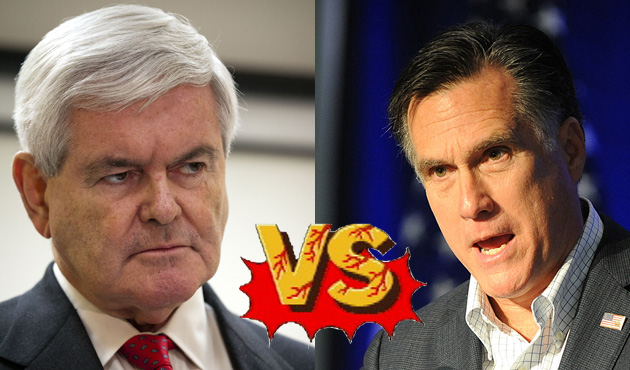 Jason Moore/ZUMA; James Colburn/ZUMARead on for the MoJo news team’s instant analysis of Monday night’s debate or jump to all the best tweets on the debate, as they unfolded in real-time, from Washington bureau chief @davidcorndc, news editor @nickbaumann, reporters @kate_sheppard, @andrewkroll, @timothypmurphy, @sidhubaba, and other political junkies. 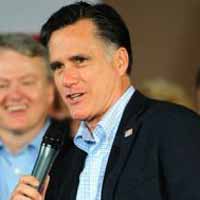 Gingrich rejected Romney’s attacks, saying he made only $35,000 a year from his Freddie gig. (The rest, he said, went to his firm.) As for the “influence peddler” claim, Gingrich went on, “I have never, ever gone and done any lobbying.”

Hours before the debate, Gingrich’s campaign released one of the candidate’s contracts with Freddie. The contract, dated February 8, 2006, called for paying the Gingrich Group $25,000 a month that year, and lists Freddie’s top lobbyist at the time, Craig Thomas, as Gingrich’s main contact at the housing corporation. The contract raises fresh questions about whether Gingrich traded on his network of Capitol Hill contacts or engaged in actual lobbying.

After Gingrich’s campaign released the 2006 contract, a top Romney aide, Eric Fehrnstrom, tweeted, “Newt’s K Street firm finally released the Freddie contract, but only for 2006. Where are missing years? He started there in 99.”

When Mitt Romney was asked how he’d fight illegal immigration in Monday night’s GOP debate, he said he advocated “self-deportation.” His comment was met with jeers from journalists and pols in my tweet stream—my favorite came from  @bartongellman: “Self-deport. I saw that on Star Trek one time”—but it’s a real term, the phrase of art, in fact, for the strategy behind the wave of anti-immigration bills introduced across the country in the last two years. The brainchild of anti-immigration groups like the Immigration Law Reform Institute, and its counsel, Kansas Secretary of State Kris Kobach, self-deportation is the intended effect of laws and requirements (such as those passed in Arizona and Alabama) that would make it so difficult for undocumented immigrants to work, rent, or go to school that they will simply “choose” to leave. Anti-immigration adovocates like this for several reasons: It has a free-market/free-will gloss to it. It purports to save money on deportation costs. And, most importantly, because it relies on states enforcing immigration via passing draconian laws rather than federal law enforcement/border efforts. It’s a conservative trifecta!

We’ll have a lot more coverage of this coming soon.

Some Context on the Gold Standard 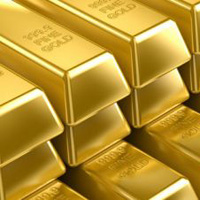 During Monday night’s GOP presidential primary debate on NBC, Rep. Ron Paul (R-Texas), a prominent advocate of pegging the value of the US dollar to the price of gold, praised Newt Gingrich, the former speaker of the House, for promising to appoint a federal gold commission to “look at the whole concept of how do we get back to hard money.” Since there was little actual discussion of the gold standard as policy (President Richard Nixon took the United States off gold in August 1971), it’s worth examining what top economists think about it. In short, they don’t think it’s a great idea. The University of Chicago’s business school recently asked several dozen top economists whether they agreed with the following statement:

If the US replaced its discretionary monetary policy regime with a gold standard, defining a “dollar” as a specific number of ounces of gold, the price-stability and employment outcomes would be better for the average American.

Every single one of the economists surveyed disagreed with the statement; i.e., they unanimously embraced the anti-gold-standard view, differing only on the degree to which they disagreed with it.

Gold standard advocates will point out that many top economists missed things like the housing bubble and the financial crisis, and that establishment support for a view doesn’t necessarily mean it’s correct. That’s true, but context is important, too.

Rick Santorum was asked at Monday night’s NBC debate about oil spills and tourism—an issue of vital interest to Florida, where the tourism-based economy was severely injured by the massive Gulf spill in 2010.

Rather than deal with the threat of oil spills, Santorum first blamed the state’s economic collapse on high gas prices in 2008. After making an appeal for the unrelated Keystone XL pipeline through the Midwest, Santorum argued that pipelines are better than tankers—another point that’s doesn’t have much to do with the Gulf spill, which came from neither a pipeline nor a tanker, but an exploratory drilling rig.

Oil, Santorum concluded, is “the best way to create a good economy for the state of Florida.”

Most people in Florida—even many Republicans—would not agree with that assessment. The Republican-controlled state Legislature has pledged that it has no plans to pursue drilling of Florida’s coasts. Florida has been less enthusiastic than many other states about offshore drilling because spills in the Gulf of Mexico directly imperil the very heart of its economy.

In Monday night’s NBC debate, Mitt Romney continued to peddle the myth that he’s a titan of free enterprise—the sort of master of the private sector who has never once benefited from tax breaks or government subsidies.

Yet Romney’s time at Bain Capital was ridden with numerous episodes of Bain-acquired companies leaning heavily on state tax packages, as the Los Angeles Times reported just a few weeks ago:

Bain Capital began looking at investing in the steel start-up [called Steel Dynamics] in late 1993. At the time, Steel Dynamics was weighing where to locate its first plant, based in part on which region offered the best tax incentives. In June 1994, Bain put $18.2 million into Steel Dynamics, making it the largest domestic equity holder. It sold its stake five years later for $104 million, a return of more than $85 million.

As Bain made its investment, the state and county pledged $37 million in subsidies and grants for the $385-million plant project. The county also levied a new income tax to finance infrastructure improvements to benefit the steel mill over the heated objections of some county residents…

Another steel company in which Bain invested, GS Industries, went bankrupt in 2001, causing more than 700 workers to lose their jobs, health insurance and a part of their pensions. Before going under, the company paid large dividends to Bain partners and expanded its Kansas City plant with the help of tax subsidies. It also sought a $50-million federal loan guarantee.

“This is corporate welfare,” said Tad DeHaven, a budget analyst with the Washington-based Cato Institute, which encourages free-market economic policies. DeHaven, who is familiar with corporate tax subsidies in Indiana and other states, called the incentives Steel Dynamics received “an example of the government stepping into the marketplace, picking winners and losers, providing profits to business owners and leaving taxpayers stuck with the bill.”

On the campaign trail, Romney’s made a habit of denouncing “crony capitalism” and government intervention in the private sector. He’s tried to convince Republican voters that he’s never engaged in it, doesn’t like it, and that real American businessmen won’t practice it.

But there’s plenty of evidence in Romney’s record that the fine art of crony capitalism is a crucial piece of making it big in the sort-of free market. In other words: it’s part of doing business in a democracy.

And that’s a wrap folks! Thanks for hanging out.

Woo! I’m self-deporting to another channel.

Much different atmosphere without red-meat GOPers whooping throughout the debate. #FLdebate

Has Newt made it througn an entire debate without mentioning “food stamps” or Saul Alinsky. #WeAreNotInSouthCarolinaAnyMore

Despite what Santorum says, Romeny didn’t actually enact cap and trade in Mass. He was going to join RGGI but then dropped out. #fldebate

Newt didn’t mention his fantasy of having space sex. Probably for the best! bit.ly/xyDYYK

Good question framing NASA/debt issues. Newt is right on more privatization of NASA. Not sure that the “Space Coast will literally hum” tho

Here’s Newt arguing for Americans to become bilingual, proposing to pay kids to teach each other Croatian: bit.ly/wBLzDH

“Self-deportation” is the strategy of anti-immigration advocates. Make it so miserable they decide to leave.

Self-deport. I saw that on Star Trek one time.

Newt is right. Obama sent the Iranians the wrong message by launching the military action that brought down Qaddafi. Oh, wait….. #FLdebate

Santorum: “Obama’s Iran policy has been a colossal failure.” Says a nuclear Iran is “the equivalent of al Qaeda” with nukes.

This Just In: Newt calls for Bay of Pigs II. #WorkedSoWellTheFIrstTime #FLdebate #NBCNews

Newt wanted to airlift the entire Bosnian army to Morocco and then train them to reinvade in early 90s: bit.ly/udssLN

Note there was big applause to Paul’s dovish comments about Cuba. Times have changed. Even in Florida.

On the housing crash:

“Markets have to have regulation to work.” @MittRomney now making a case for regulating derivatives, mortgages. #FLdebate

Newt: get rid of Dodd-Frank and the economy will improve.//Yes, the financial sector did such a good job before Dodd-Frank.

Newt and Mitt get rowdy:

from Congress after four years as speaker and then spent the next 15 years “working as an influence peddler” in Washington.

[Gingrich frantically searching for button that will open up the floor beneath Romney.]

Romney’s delivery isn’t great. But keep in mind Newt resigning from House is NOT something that many rank-and-file voters know about.

Mitt: We didn;t do any work with the government.” Wait a minute. Bain got tax subsidies. #NBCdebate

Let’s be CLEAR: Romney gave two decades of his tax returns to the McCain Campaign for VP vetting, and then they chose Sarah Palin.

Keep in mind @RickSantorum didn’t bother to correct a woman questioning him today who called Obama a “devout Muslim.” #FLdebate

Newt did not balance the budget four times. Brian Williams, I’m assuming, knows this and will follow-up.

Gingrich played the Reagan Card a world record 3.26 seconds into the debate.

Comcast is listing the debate on the guide as “Fear Factor” on my TV. Oddly appropriate.#fladebate