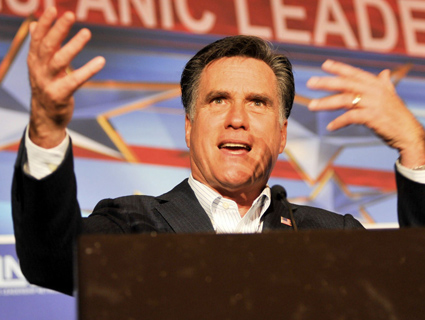 With the sting of defeat in the South Carolina primary still fresh at last week’s Republican presidential debate in Tampa, Mitt Romney slammed Newt Gingrich for his record as a consultant—or “historian,” in Newt-speak—for government mortgage-backer Freddie Mac.

But perhaps Romney should think twice before setting his sights on the former speaker’s lobbying-related past. That’s because the ex-governor has benefited handsomely from the influence-peddling of Bain Capital, the private equity firm he cofounded in 1983. Though he’s been gone from Bain for over a decade, Romney continues to rake in millions from accounts with the firm—and in 2007, he took Bain’s side in a key lobbying battle with Washington—one that saved him millions of dollars.

2007, as it turns out, was something of a watershed for private equity lobbying: In that year, lobbying expenditures for the industry practically tripled. The spike was the result of an industry-wide effort to preserve a number of tax giveaways for the finance industry and its CEOs—including the carried interest rule, a tax loophole that allows Romney and other private equity mavens to reduce their taxes by millions of dollars. Carried interest refers to the commission that private equity and hedge fund executives receive for managing investors’ money. Although commissions may seem like ordinary income to the rest of us, the carried interest loophole allows some money managers to claim this income as long-term capital gains, which are taxed at a rate much lower (15 percent) than the top tax rate for normal income (35 percent).

After Democrats won control of both the House and the Senate in the 2006 midterm elections, they advanced several pieces of legislation that threatened to end this lucrative quirk of the tax code and other tax policies that favor the rich. Mitt Romney, who made just over $20 million in investment income in 2010, wasn’t having any of it. During an August 2007 appearance on Kudlow & Company, Romney was asked what he thought of the effort to close the loophole. He wasn’t happy. “I want people to be able to save their money and invest in America’s economy tax-free,” Romney said. “I want to lower taxes. I want to lower marginal rates across the board. I want to lower taxes for corporations,” he told Kudlow.

Bain was doing its part to make Romney’s vision a reality. The firm spent $300,000 between August of 2007 and April of 2008 lobbying the House and Senate on bills that threatened the carried interest loophole. Along with other private equity titans like Kohlberg Kravis Roberts and Apollo Management, Bain and its ilk paid lobbying shops, public relations firms, and trade groups like Ogilvy and the Private Equity Growth Capital Council an estimated $15 million between January 2009 and April 2010 to convince lawmakers to keep the loophole alive. The force of those combined lobbying efforts kept the carried interest loophole wedged open, denying the federal government some $10 billion in revenues in the process. “Everyone who has looked at this boondoggle [of carried interest] thinks it’s an egregious giveaway,” Jacob Hacker, the co-author (with Paul Pierson) of Winner-Take-All Politics, says. “It still lives because of the lobbying of the industry, and in particular the PEGCC.”

From 1998 to 2006, private equity and investment firms spent $3 million a year lobbying Congress, according to the Center for Responsive Politics. Bain got into the game in 2007, registering with prominent Washington lobbying firms Public Strategies, Inc. and Akin Gump Strauss Hauer & Feld. To date, Bain has paid some $3 million to these firms to make sure corporate taxes stay low and CEOs remain fat and happy.

As the New York Times reported several weeks ago, Bain was a member of the Private Equity Growth Capital Council up until last year, when it abruptly ended its $1-million-a-year membership with the powerful trade group. Its reasons for doing so remain unclear. (PEGCC did not respond to a request for comment.)

Investment fund managers and former CEOs like Mitt Romney suggest that taxing their carried interest as income would crimp investments, and, ultimately, kill jobs. But as Howard Gleckman, a tax policy expert at the Urban Institute, has found, there is little evidence to support that claim. “Losing a couple percentage points off your returns isn’t going to change things very much,” Gleckman says. “Taxing carried interest as if it were wages…wouldn’t really affect these deals very much.”

Now that a small sample of Romney’s tax returns is out in the open, voters may be asking more questions about how policies like the carried interest rule work. Josh Kosman, author of The Buyout of America: How Private Equity Is Destroying Jobs and Killing the American Economy, says that’s terrifying for the private equity world. “The private equity industry exists because of tax gimmicks,” Kosman argues. “They want to convince people they create value because if anyone started looking at it, the tax rates don’t make any sense, and they cost the government a lot of money.”

As Hacker explains, today’s favorable tax treatment towards capital gains dates back to the late 1970s, when the lobbying might of business groups like the US Chamber of Commerce successfully sliced the tax on capital gains in half. The Tax Reform Act of 1986 brought the rate back into line with the rate on ordinary income, but business lobbies spent the next decade knocking it back down. “For an industry that’s held up as a paragon of individual entrepreneurship, private equity is strikingly dependent on favorable tax policies,” Hacker said.

Of course, private equity isn’t the exclusive terrain of one party or the other. As Hacker and Pierson outlined in their book, Sen. Charles Schumer (D-N.Y.) has been one of the carried interest loophole’s most ardent defenders. And as Kosman points out, four of the past eight Treasury secretaries have direct ties to the private equity industry.

All of this, of course, could pose a huge a problem for Romney—so much so that his campaign recently suggested that he might be open to reconsidering the carried interest loophole if he were to be elected president. Although Bain did not start lobbying until some eight years after Romney left, his just-released tax records indicate that he still collects significant investment income from the firm. Bain’s gain, then, has clearly been Romney’s as well—and the candidate has publicly endorsed the same policies the company has backed.

So when Bain’s lobbyists have tried to sway the political system in Washington, Romney has gained. Maybe he ought to be careful when denigrating the influence peddlers in the nation’s capital.