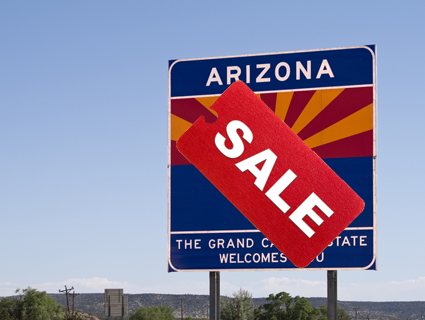 State governments have taken a number of different steps to balance their books in recent years. Texas Gov. Rick Perry (remember him?) proposed a new tax on strip clubs, for example, and a Utah state rep. suggested saving $60 million per year by abolishing the 12th grade. But no proposal struck as much metaphorical gold as Arizona’s decision to sell off the state capitol (and a whole bunch of other state properties, such as maximum security prisons) for $735 million in 2009. Republican Gov. Jan Brewer signed off on the deal, and the state now leases the House and Senate chambers from a private real estate company at a considerable long-term cost.

But now, presumably still a little embarrassed by the whole episode, presented with the unfamiliar feeling of cash on hand, and rapidly approaching the state’s 100th birthday, Brewer wants the Arizona capitol back in the hands of Arizonans. Here’s the Yuma Sun:

The move will cost the state $105 million out of its current budget surplus. Brewer press aide Matthew Benson said the state has the cash.

Benson acknowledged the state actually got only $81 million for the state House, the Senate and the nine-story executive tower that includes Brewer’s office when it negotiated a “sale-leaseback” arrangement in 2010…

“Most of our Capitol complex, including the building we gather in today, is not ours,” Brewer said in her State of the State speech delivered in the House building. “So … to make all of our Capitol truly ours once again, I’m asking that you send me a bill by Statehood Day that allows me to buy back the Capitol.”

Arizona’s decision to sell off its state capitol to a private real estate company was perhaps the greatest drunken eBay transaction of all time, except in this case there was no booze involved, and the whole arrangement was justified on the grounds of austerity and small government. That said, buying back the capitol isn’t a terrible idea.

The longer the state continues making payments on the property, the more the whole embarrassing episode will have cost taxpayers. That’s what made the plan such a terrible idea to begin with (well, that and the fact that it involved selling off the state capitol). As for the building, you could make a pretty good case it’s not worth paying for. As Ken Silverstein explained in Harper‘s, no matter who holds the deed to the place, it will forever be a monument to governmental incompetence:

In 1897, when the Territory of Arizona was seeking to demonstrate its fitness for statehood, the legislature solicited bids to design a new capitol building and grounds in Phoenix. The winning entry was that of James Riely Gordon, the architect behind a number of well-regarded public buildings in Texas and Maryland. He drew up ambitious plans: an expansive dome, a grand rotunda, stately wings for each house. But funding fell short, and so the legislative wings were scrapped, and a diminutive lead-alloy top was chosen in lieu of Gordon’s more elaborate dome. Worse, in the building’s interior, a mosaic of the state seal was bungled by the contractor, who forgot to include the images of cattle and citrus, two of Arizona’s “five C’s” (the others being climate, copper, and cotton).

Despite much talk over the years of an upgrade—including a proposal from none other than Frank Lloyd Wright, who envisioned the addition of fountains, gardens, and reflecting pools—all plans were rejected as too expensive. In the 1960s, two new buildings were finally erected on either side of the capitol, one for the house and one for the senate; but these structures, which resemble Soviet apartment blocks, only made matters worse.