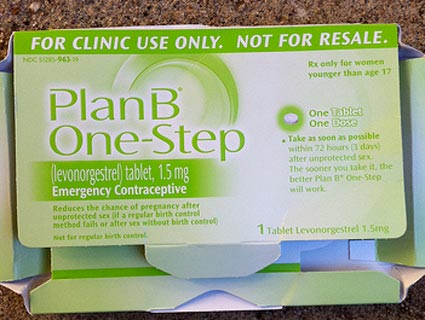 On Wednesday, Health and Human Services Secretary Kathleen Sebelius overruled FDA findings showing that Plan B One Step is safe to be sold to all females of childbearing age without a prescription. As we’ve already mentioned, there are some hefty problems with this ruling, including that now the emergency contraceptive will be kept behind pharmacy counters instead of on store shelves, where women will have to present either a prescription or identification proving they are older than 17 in order to purchase it. Yesterday, the president announced his support for the HHS decision.

The reproductive rights community has reacted strongly against the decision, wondering whether it really has to do with data. “When it comes to FDA drug approvals, contraceptives are being held to a different and non-scientific standard—in a word, politics,” Center for Reproductive Rights President Nancy Northup said in a press release from the group.

Meanwhile, a less likely voice has entered the mix: that of the scientific community. The Union of Concerned Scientists published a statement yesterday on their website decrying the HHS decision—and Obama’s support of it—as an attack not only on reproductive rights but also on sound science.

The UCS points out that this is the first time an HHS secretary has overruled the FDA on a drug approval. But as Erin Matson, action vice president of the National Organization of Women, noted on Twitter, the administration rarely disagrees with the FDA—drugs or no drugs. She tweeted: “Perhaps the last time the FDA was overruled: A cranberry recall in 1959. Now Obama admin after emergency contraception in 2011. OUTRAGE.”

As such, yesterday’s decision sets an ugly precedent for scientific assessment of drug safety. “The agency needs to be able to do its job without fearing that the integrity of its work will be compromised,” says Francesca Grifo, director of the UCS’s Scientific Integrity Program.

The UCS also points out that this decision flies in the face of Obama’s commitment to scientific integrity in government. A few months after his 2009 inauguration, the president called for the Office of Science and Technology Policy to craft better protections for scientific research in government. “Political officials should not suppress or alter scientific or technological findings and conclusions,” the memo says.

But as Mother Jones‘ Kate Sheppard has written about extensively, those new scientific integrity standards took a year and a half to publish—and when they finally appeared, they were too little, too late. The government standard, she explains, is flawed because it simply sets minimum requirements, instructing individual agencies to then do the rest of the legwork to craft airtight safeguards for the use of science in government decision making.