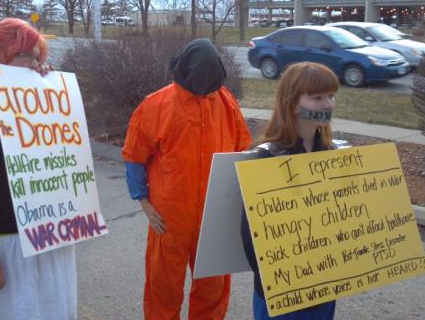 Occupy Iowa continued a string of protests on Thursday, this time outside Democratic Party headquarters in Des Moines, resulting in the arrests of 12 people. Among them was 14-year-old Frankie Hughes, who was released into her father’s custody at the scene and may face a juvenile court proceeding. The overall tenor of the arrests was peaceful and symbolic.

When the protesters first arrived, Iowa Democratic Party chairwoman Sue Dvorsky and executive director Norm Sterzenbach came out to greet them. The two party officials spent about 20 minutes expressing their frustrations with what they considered to be a distraction, but also their willingness to listen to the protesters’ grievances. Then they went back inside to prepare for the January 3 caucuses, and soon called the police.

The protesters originally planned to demonstrate outside Barack Obama’s campaign headquarters, after having focused their attention Wednesday on Mitt Romney. They changed their plans after an impromptu early morning protest at Ron Paul’s headquarters, and after hearing that Obama’s headquarters had closed for the day. At the new location, about 40 protesters focused their attention on Obama’s ties to Wall Street and his support of the National Defense Authorization Act, which codified the indefinite detention of terrorist suspects arrested on US soil.

“We are here to listen to you. We are not trying to ignore you,” Dvorsky had told protesters before the arrests. “But we don’t know what you want,” she added, expressing frustration that, after eight protesters were arrested at the same location 10 days prior, some occupiers had turned down a subsequent offer to meet with her and instead showed up to protest on Thursday unannounced. When protesters asked Dvorsky to make a phone call to the White House to request that the president meet with Occupy Iowa, she refused, calling the demand unrealistic. “You guys are working outside of electoral politics,” she added. “We work inside of it. That’s the best answer I can give you.”

That didn’t satisy veteran antiwar activist Frank Cordaro, who was arrested after he refused a police order to move to the sidewalk. “There’s nothing that Sue can say to us that would be an adequate response to the concerns that we have,” he told me as he sat with two other protesters blocking a headquarters door. “Whatever the message is, we’re coming after the president. He betrayed us.”

Emily Allison, a Des Moines protester who was also arrested, agreed. She campaigned for Obama in 2008 but doesn’t plan to vote for him next year. “When he won me over, I remember him specifically telling us that he wanted the people to hold him accountable, because the government is the people’s government,” she said. “I’m not satisfied with the job that he’s done, so I think it is important for us to let him know that we have demands that need to be met if he wants to be reelected.”

After the protest and arrests, Occupy Iowa outlined its specific demands for Obama in a press release: end home forclosures to ease the mortgage crisis, stop taking campaign money from Wall Street, end indefinite detentions of terrorism suspects, and “start listening to the issues of the 99% instead of the issues of Wall Street.”

Thursday’s 12 arrests bring the week’s tally to 27. Everyone so far has been released on the days of their arrests. Because 14-year-old Hughes—who was previously arrested in October when police cleared out an Occupy Des Moines campsite at the State Capitol—is a juvenile, police allowed her to leave the Democratic Party headquarters with her father. The other arrestees were taken to a nearby processing center. Among that group was Hughes’ mother, Renee Espeland. According to Espeland, the police said her daughter’s trespassing violation may be referred to a juvenile court in the coming weeks.

“I’m very nervous because the cop who arrested me acted like my father wasn’t a good father because he allowed me to speak my mind,” Hughes said. “I am nervous that people aren’t going to understand that my family isn’t bad. They’re just supportive.”

Before police arrived on Thursday, the protesters (including some other kids) expressed their frustrations with Obama and Wall Street through a bit of performance: