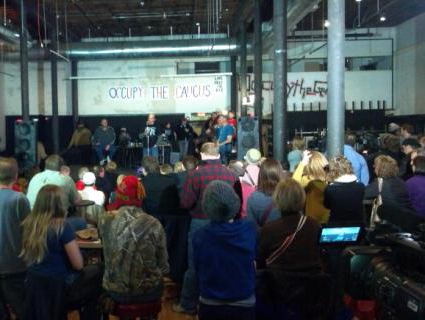 Inside a rented storefront down the street from the State Capitol in Des Moines, Occupy Iowa supporters preempted the state’s first-in-the-nation caucuses with their own “People’s Caucus” Tuesday night. After a day of strategizing, the activists broke into preference groups to indicate which local presidential campaign headquarters they would most like to see occupied over the next three days. The winner of the dubious honor: Barack Obama, followed by Mitt Romney and, in a close third, Iowa GOP front-runner Ron Paul.

About 200 people, including a small handful from occupations across the country, turned out for the event. Participants ran the gamut from pre-teens to seasoned protest vets, and one energetic young man sported Hatchet Man jewelry from the band Insane Clown Posse.

A flyer distributed Tuesday explained that after three days of occupying presidential campaign headquarters, central Iowa occupy demonstrators plan to “occupy campaign events around the state” from Saturday until Monday, January 2—the day before the caucuses. That could mean anything from mic-checking candidates to further occupations: “The execution of it is all over the board,” one supporter explained.

Iowa occupiers expect to see arrests in coming days, starting Wednesday as they reconvene in Des Moines before heading out for the first round of campaign headquarters protests.

Frank Cordaro, a local member of the anti-war Catholic Worker Movement, was among eight protesters arrested last week during an occupation of the Des Moines Democratic Party headquarters. It was the latest of more than 200 arrests Cordaro’s faced since 1977, and he plans to get arrested again this week. But he believes that the occupy protesters, whose advocacy for the poor he said closely resembles his group’s work, have already succeeded. “We’ve already reached our goals,” he argued. “We have changed the political discourse of the Iowa caucus this year.”

Although Occupy Iowa has repeatedly said it has no plans to disrupt the January 3 caucuses themselves, local law enforcement officials are watching its plans closely. One police officer even joined the Ron Paul preference group at the People’s Caucus, explaining to occupiers what would and wouldn’t get them arrested if they protest outside the candidate’s suburban headquarters Wednesday.

Demonstrators don’t intend to let up the pressure. Arianna Norris-Landry, an Occupy St. Louis member, first took interest in Occupy Des Moines after picking up her son from Simpson College, a private school 20 minutes south of the city, for Thanksgiving. Before heading home, she swung by Occupy Des Moines’ campsite—one of a few dozen in the country still standing, despite the cold. “Iowans don’t get upset. They’re nice people,” she told me. “And they’re mad? Our country is having serious issues.” That’s why she returned to Iowa for the People’s Caucus, with an invitation to stay the night in a foreclosed house in lieu of ponying up the cash for a hotel room. 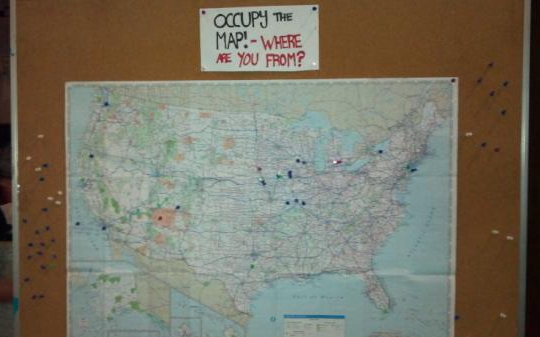 Traveling occupiers indicated where they’d arrived in Des Moines from with thumbtacks on this map. Gavin Aronsen

Norris-Landry plans to head back home soon, but Andrew Couch, a former resident of Des Moines who joined Occupy Wall Street a few months after moving to Brooklyn for a software development job this spring, is sticking around to protest at Obama’s local headquarters. “Obama’s a good choice, because there’s a good chance he might start to listen if we go and talk to him, and the people in the office will be more receptive [than Republicans],” Couch said.

On caucus day, occupiers have separate plans to attend their local Democratic and Republican caucuses to cast votes for “uncommitted,” with the ultimate goal of electing a bloc of Occupy delegates to the parties’ national conventions next year. The state GOP, however, plans to count caucus votes at an “undisclosed location.” It also reportedly won’t send uncommitted delegates to its nominating convention, prompting Occupy Iowa members to shoot off an angry press release likening the process to that of “Putin’s Russia or Ahmadinejad’s Iran.”

For many politically engaged Iowans who remember years of lonely struggles against the establishment, the camaraderie the occupy movement provides is a breath of fresh air. For Elaine and John Jordan of Knoxville, Iowa, that fight dates back to the 1980s, when their livelihoods were threatened as corporate agriculture swallowed up small farms. “At that time there was nobody like Occupy Iowa that came out and really tried to help save the family farmers,” Elaine said. “We’ve never forgotten that.”