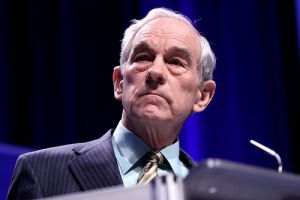 Even as he’s climbed to the top of the polls in Iowa and gone so far as to preemptively claim victory in New Hampshire, Rep. Ron Paul (R-Tex.) has spent much of the last week distancing himself from racist and homophobic articles that appeared in his eponymous newsletter in the 1980s and early 1990s. In part, that’s because anxious conservatives have decided to make an issue of it—last week, the Weekly Standard dispatched James Kirchik to rehash his original 2008 bombshell on the newsletters. It’s also because, as Dave Weigel explains, Paul has failed to put together a coherent response. On Wednesday, Paul walked out of an interview with CNN’s Gloria Borger when she pressed him on his role in publishing them.

The story hasn’t gone away, and now Reuters has the latest: A newly unearthed subscription pitch circa 1993, this time bearing the signature of Paul himself. It reads like a caricature of the conspiratorial, unhinged, early ’90s militia movement, the kind of thing that would make the John Birch Society blush. Written in the first person, it warns of threats from the “demonic fraternity” we know of as Yale’s Skull and Bones society, the Trilateral Commission, the “perverted, pagan” rituals at Bohemian Grove, a global government, “the coming race war,” the Council on Foreign Relation, and FEMA. Paul (or his ghostwriter, at least) carefully explains that you can trust his view that the federal government is behind AIDS, because he’s a doctor:

It’s plausible enough that Paul didn’t write the newsletters he published, and that he doesn’t agree with all of the opinions expressed therein, and that he was lying in 1996 (when he endorsed the opinions contained therein) and not in 2001 (when he first claimed ignorance). That’s the case Weigel and Julian Sanchez made, anyway.

But even setting all of that aside, there’s another element to the story.

Each of the successive Presidential front-runners have, at various points, come under fire for how they earned their incomes. Michele Bachmann’s small-business succeeded in part by attempting to turn gay people straight. Rick Perry became a millionaire through a series of super-lucky real estate deals with people he was in a position to help out, which supported the idea that he was a crony capitalist. Through the private equity firm he co-founded, Bain Capital, Mitt Romney conducted leveraged buyouts of companies, often leading to layoffs, which supports the narrative that he’s the kind of guy who would pose for a photo with money coming out of his collar. Newt Gingrich took money from health care companies to shill for their products, and millions from Freddie Mac to (essentially) lobby on its behalf.

Paul’s newsletters weren’t just a form of political expression or “educational” (as he bragged in a 1995 C-Span interview)—they were a highly lucrative endeavor. In 1993 alone, Paul’s publishing company brought in a million dollars. The newsletter was published for decades, which suggests that Paul stood to make a lot of money from it. Paul has attempted to laugh that charge away, but that’s a lot different than refuting it. And from the pitch letter sent out under Paul’s name, his was a hard sell, perfectly calibrated to cash in on fears. “[B]ad times offer the greatest profit opportunities,” he writes. The government’s plans will “chill your blood.” “Help me help you survive.” “The holocaust of the underground economy.” “You may not have much time left.” By imparting this information, Paul claimed he might be placing his life at risk: “I’ve been told not to talk, but these stooges don’t scare me.” The letter concludes with these stirring words: “There’s no time to waste. The new money may not come until next year. Or it may be imposed tomorrow. You should subscribe today.”

If the Ron Paul Survival Report wasn’t a sincere expression of the congressman’s views, it was nonetheless a scheme to profit by stirring up the worst fears of a small group of the population. Which is why as long as Paul continues to duck and weave rather than address the very real questions posed by his newsletters, the controversy will not go away.

And right on cue: the New Republic has just published dozens of new PDFs of the newsletters.