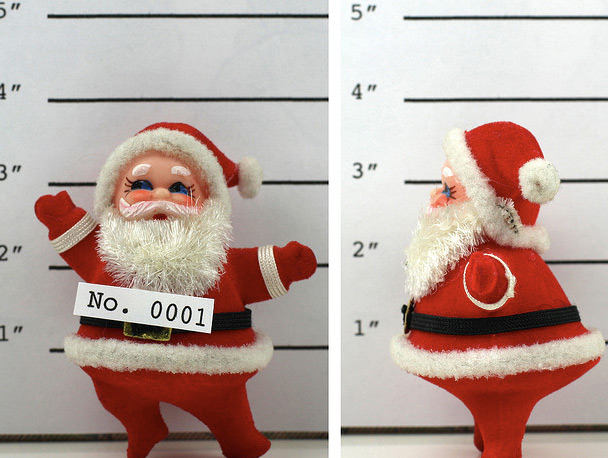 Mr. Claus was not about to peaceably accept the onslaught of terrible seasonal pop songs played in his honor. The cops drew the line at public urination, though.<a href="http://www.flickr.com/photos/12836528@N00/3124443099/">Kevin Dooley</a>/Flickr

By now, it’s almost impossible to remember a time when local radio stations weren’t blasting Christmas/winter/secular-Santa music 24/7. You’ve probably heard the holiday stylings of Mariah Carey, Wham!, Miley Cyrus, Alvin and the Chipmunks, and Gene Autry enough times in the past few weeks to recall the lyrics as well as you would your mother’s maiden name.

And to get you through the remainder of the holiday blitz, here are seven Christmas songs that don’t in fact suck. We’ve got Ike & Tina Turner, John Lennon, and oddball community college students from that NBC sitcom nobody watches. In the event that you are seeking more diversity in terms of musical epochs, many apologies in advance for most of these songs being of a “classic” variety. (Kings of Leon probably could’ve come up with a pretty sweet contemporary Xmas jingle, but it just so happens that they find the holiday hugely “depressing.”)

1. James Brown, “Please Come Home for Christmas”: This 1960 blues song by Charles Brown has been covered to death: Aaron Neville, Willie Nelson, Bon Jovi, the Eagles. But the Hardest Working Man in Show Business recorded the most tastefully ragged version. (As his final act of impeccable style, the Godfather of Soul died on Christmas Day 2006.)

The song posits that Jolly Ol’ St. Nick was responsible for everything in the second half of the 20th century, from fake butter to the Iron Curtain. Here’s a taste of the beautifully nonsensical lyrics: “Santa fought at Woodstock and Vietnam/And smoked a ton of acid and burnt his bra!”

3. John Lennon, “Happy Xmas (War Is Over)”: Lennon recorded this anti-Vietnam War song with the Plastic Ono Band and the Harlem Community Choir in 1971. With the official end to the American war effort in Iraq, and with the holiday homecoming of servicemembers, the song takes on a whole new meaning.

4. Ike & Tina Turner, “Merry Christmas Baby”: Here’s another blues and R&B Christmastime staple, which has been performed by every artist from B.B. King to (ugh) Hanson. With the possible exception of Otis Redding, Ike & Tina Turner cranked out the best rendition. The duo’s patented gospel-stomp and funk edge are on full display here:

5. Keith Richards, “Run Rudolph Run”: For his inaugural single as a solo artist, the Rolling Stones guitar player swaggered-out his take on the Chuck Berry Christmas classic. This is from way back in 1978, when Richards’ youthful howl was firmly intact.

6. Bruce Springsteen and the E Street Band, “Santa Claus Is Coming to Town”: You’ve heard the song at least 8 trillion times since you were born. The Boss somehow managed to make it cool. When Springsteen headlined Bonnaroo in June 2009, attendees pleaded with him to perform it, to which he replied, “It’s too fucking hot for Santa.” And then the band played it anyway, never minding the season or temperature.

Please recommend your favorite Christmas (or Hanukkah, Boxing Day, and Kwanzaa) songs in the comments section.