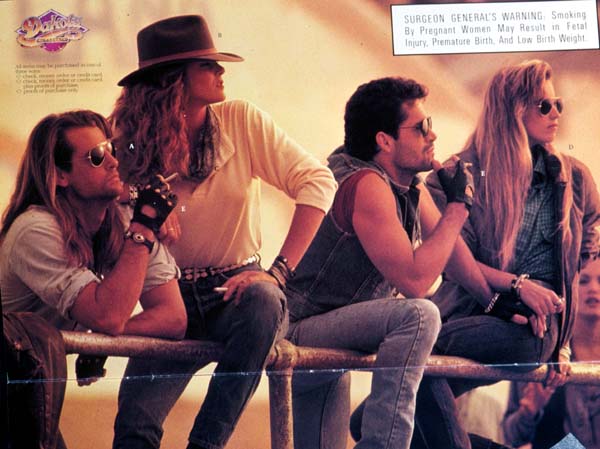 Roswell Park Cancer Institute/TobaccoDocuments.orgIn 1990, R.J. Reynolds Tobacco Co. commissioned a marketing strategy for a new brand of cigarette. Aimed at young women 18 to 24 years old, with no education beyond high school, an entry-level job, and little more aspiration than finding a man, the campaign was code-named “VF,” for Virile Female. The VF was Caucasian, related to Roseanne and the “bitches” on the evening soap operas, and wanted to spend her free time “with her boyfriend, doing whatever he is doing.” For fun, she watched tractor pulls and pro wrestling.

The ad campaign based on these characteristics would have to walk a fine line: The ideal VF couldn’t be too tough or too submissive, and the visuals would need to combine masculine imagery with a feminine sense of stability. She would be depicted as cool, rebellious, and attitudinal, but in a positive, nonthreatening sense—an updated female counterpart to the Marlboro Man.

When outed, the campaign was vilified and then scrapped. But the Virile Female is back with a vengeance. Today’s VF has grown older, earned her degree, and gotten a Christian makeover, but she’s still an alluring mix of alpha dominance and beta submissiveness. She’s on the other side of the sales pitch now, however, and she’s all about politics. The two most visible spokesmodels and baddest VFs are Michele Bachmann and Sarah Palin. To use a Bachmannism, they are “the tip of the spear” in the battle for America, and they don’t take prisoners.

The unofficial “US 4 Palin” website celebrates the Alaskan VF: “When [former] Governor Palin’s steel was not being forged on the basketball court, the hunting grounds, or the firing range, it was being forged in Bristol Bay’s watery crucible as an employee on Todd Palin’s fishing boat.” She can kick your ass, reel in a 500-pound Chinook salmon—under her husband’s supervision—and put you in her crosshairs before you’ve ordered your first low-fat/no-foam/sissy cappuccino.

The other VF, Michelle Bachmann, often notes that she has a “titanium spine.” But her shiny metallic backbone becomes pliant in the hands of God and her husband.

In a 2006 speech at the Living Word Church, Bachmann said that the Lord led her to Marcus and told her to marry him. The Lord said, “Be submissive,” she said, so she listened to Marcus when he told her to become a tax lawyer. It was the Lord and Marcus who told her to run for the Minnesota Senate and then the US Congress.

The VF solves a problem posited by Simone de Beauvoir in The Second Sex, namely that in endeavoring to escape from the prison of her gender role women create a conflict with the First Sex. “It is with bad grace that the man lets her go,” wrote de Beauvoir. There is no conflict between the VF and her man, however, because she has no interest in escape. The endeavor of VFs like Palin and Bachmann is retrenchment dressed up as progress.

In a recent study of the tea party movement, sociologists Andrew Perrin and Steven Tepper found that a much higher percentage of tea partiers than the general population are concerned about “changes taking place in American society these days.” The VF wants to protect the status quo, not rock boats. She will fight like a mama grizzly if her home hearth is threatened, and her husband makes it known that he’s turned on by his woman’s roar.

The original VF had no more than a high school education. The new VF, as epitomized by Bachmann and Palin, is more educated but remains a standard bearer for a new Know Nothing movement. These modern VFs also inhabit a fact-free zone in which anyone who challenges them hates America. (Call it the VF version of the homecoming queen’s retort: “You hate me because I’m beautiful.”)

Bachmann frequently describes her American bona fides, including a working-class upbringing. That the entitlement-slashing policies she advocates would disproportionately hurt precisely these families is immaterial. Titanium is the new Teflon.

RJ Reynolds’ VF cigarette brand was the short-lived Dakota, a sleek and soothing presence in a nation struggling with cultural upheaval and economic hard times. In updating the VF role for the 21st century, Bachmann and Palin similarly capitalize on anxiety and resentment. They provide the sensation of control without actually providing it, and, at least where the media are concerned, they’re addictive.