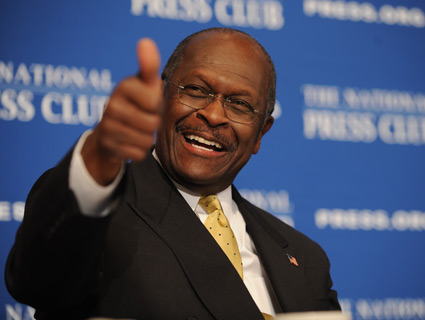 This is been the general line from Cain supporters since the allegations surfaced—despite the fact that the incidents occurred years ago and involved financial settlements, Politico is guilty of holding a “high-tech lynching” merely by revealing their existence. Lord in particular offers a wonderful example of the right’s selective interest in anti-black racism: its tendency for shrieking hyperbole when a black conservative is involved and callous indifference when the “wrong kind” of black person is not. Or as Rush Limbaugh put it, this is “an unconscionable, racially stereotypical attack on an independent, self-reliant conservative black because for him that behavior is not allowed.” Because the last thing Limbaugh wants is to portray black people in a stereotypical fashion.

Here, for example, is Lord calling former USDA Official Shirley Sherrod (who was fired after a selectively edited video from Andrew Breitbart cast her as an anti-white racist) a “liar” for saying that her relative Bobby Hall was lynched by Claude Screws, the sheriff of Baker County, Georgia. You see, Screws didn’t kill Hall with a rope, he and his colleagues merely beat him to death with blunt objects and fists while he was handcuffed.

It’s also possible that she knew the truth and chose to embellish it, changing a brutal and fatal beating to a lynching. Anyone who has lived in the American South (as my family once did) and is familiar with American history knows well the dread behind stories of lynch mobs and the Klan. What difference is there between a savage murder by fist and blackjack — and by dangling rope? Obviously, in the practical sense, none. But in the heyday — a very long time — of the Klan, there were frequent (and failed) attempts to pass federal anti-lynching laws. None to pass federal “anti-black jack” or “anti-fisticuffs” laws.

In case I really need to explain this, actual anti-lynching legislation referred to “an assemblage composed of three or more persons acting in concert for the purpose of depriving any person of his life without authority of law as a punishment for or to prevent the commission of some actual or supposed public offense,” because it wouldn’t have made much sense to write a law prohibiting the extrajudicial killing of black people only if a rope is involved.

So just so we’re clear, Lord thinks that the “liberal” Politico reporting on two settlements related to sexual harassment allegations in Cain’s past is “a high-tech lynching.” But the actual lynching of Bobby Hall isn’t a real lynching, because it involved cops beating him to death instead of reporting unfavorable allegations from his past.

The term “high tech lynching” was first used by then-Supreme Court nominee Clarence Thomas to dismiss allegations of sexual harassment against him as the work of a racist conspiracy. Its reintroduction into the American political conversation as a term associated not with something resembling the actual horrors of Jim Crow—from which it draws its moral weight—but with the cynicism of conservatives willing to acknowledge the existence of systemic racism only when one of their own could be a victim, seems fitting.  As with “reverse racism,” when a conservative says “high-tech lynching,” it signals that something bad is happening to someone you’re actually supposed to care about. It identifies the bad kind of racism, as opposed to the kind that liberals make up.