Also see: A map of the nuclear bombs in your  backyard and a look at our expensive, expanding nuclear weapons complex.

US government scientists have been dreaming up unusual applications for nuclear weapons since the earliest days of the atomic age. Here are a few schemes that developed new uses for the world’s most destructive technology.

The Davy Crockett: This tactical nuclear recoilless rifle with a 0.01-kiloton payload was designed for use on conventional battlefields. The lightest nuke ever, it had a top range of 2.5 miles, which meant it stood a good chance of irradiating the very soldiers firing it. Starting in 1956, around 2,100 were produced; the Army deployed it until 1971. The video below shows a Davy Crockett being live-fired before a military audience (skip to 3:35 for the explosion): “It detonated perfectly, releasing its lethal radiation!” 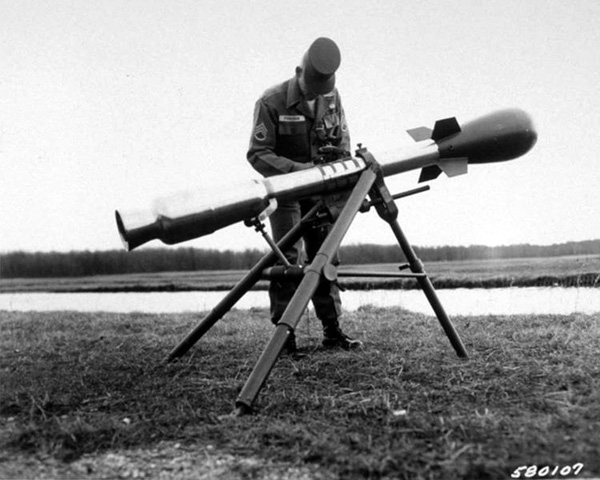 Atomic Annie: This nuclear field cannon could fire a nuclear shell up to 20 miles. It was fired only once, at a May 1953 test in Nevada captured in the video below (the gun goes off at 0:33). Fun fact: The 280-mm artillery piece (presumably unloaded) was part of President Dwight D. Eisenhower’s 1953 inaugural parade. 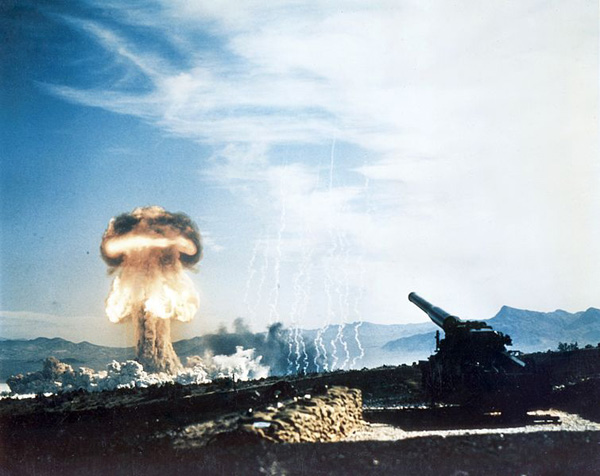 Project Orion: This sci-fi plan would have propelled a rocket ship by dropping 800 atomic bombs in rapid succession beneath it. NASA entertained it as an option for powering a manned mission to Mars until the Nuclear Test Ban treaty put the kibosh on it. 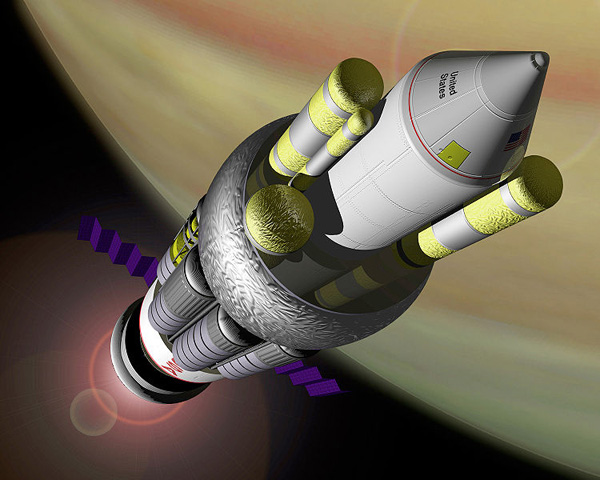 Operation Plowshare: Underground nuclear tests often left behind huge craters, so someone got the bright idea to use nukes as giant earthmovers. As part of the Plowshare project, 27 bombs were set off between 1961 and 1973, and plans were drawn up to use nuclear explosions to create new roadways, widen the Panama Canal, and tap natural gas reserves. The 1962 Sedan test, shown below, left an enormous crater that was used to train moon-bound astronauts and is now a tourist attraction. 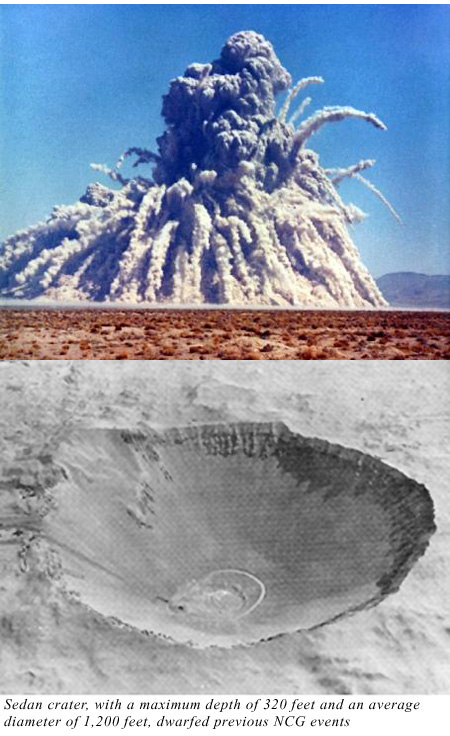 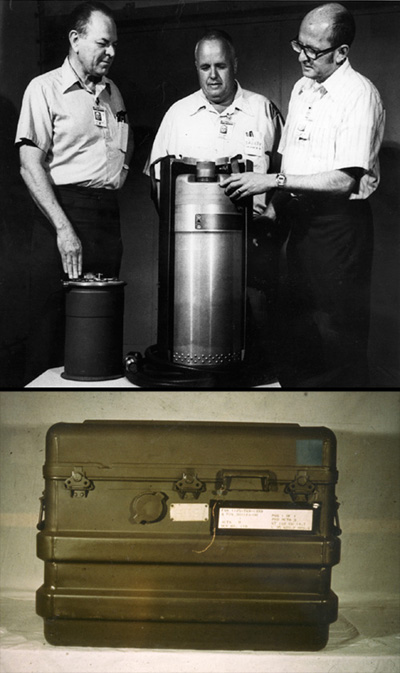 Airborne ICBM launcher: When design engineer Scott Lowther worked for defense aerospace firm ATK, he came across designs for a “flying ICBM launcher” made from a retrofitted jet liner. “It’s a neat idea, but it seems to be tackling the concept of launching big rockets from jetliners the *hard* way,” Lowther, now aerospace historian, writes in an email. But, he adds, “It’d be a hell of a thing to see, though.” Below, drawings from a patent application for the plane. 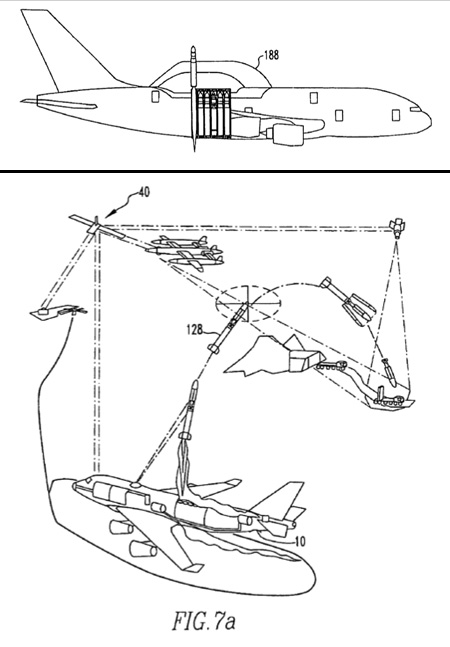 Prompt Global Strike: This project, conceived in the Pentagon under Defense Secretary Donald Rumsfeld, envisions using ICBMs to deliver nonnuclear explosives anywhere in the world at a moment’s notice. Even though this weapon wouldn’t involve nuclear warheads, one possible flaw is that its profile would be hard to distinguish from a conventional nuke—which could be a problem if it had to fly over, say, Russia or China. 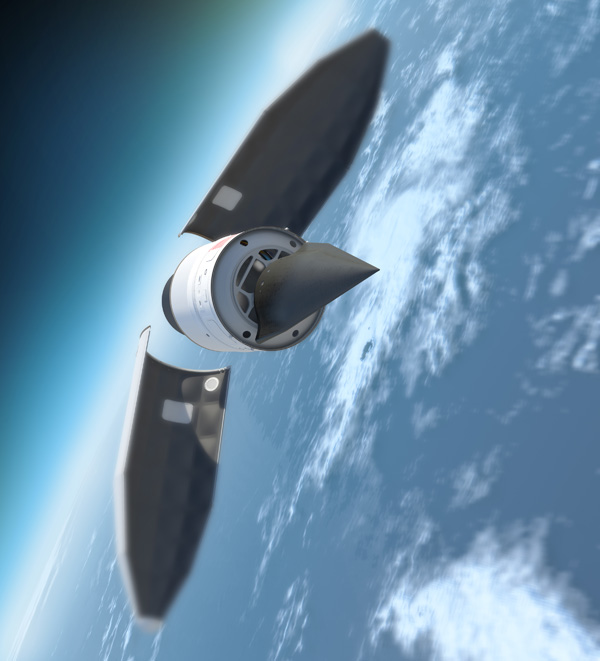 Asteroid interceptor: What do we do if a planet-killing asteroid is heading our way and we can’t send a motley crew of demolition experts into space to blow it up? Scientists at NASA and Lawrence Livermore National Laboratory think a spare nuclear warhead could “nudge” it out of our path. 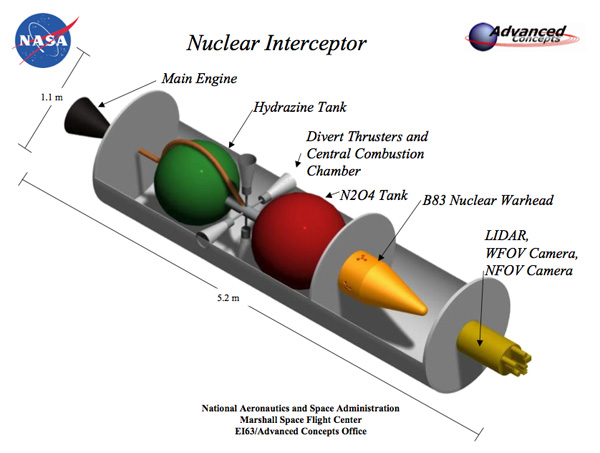