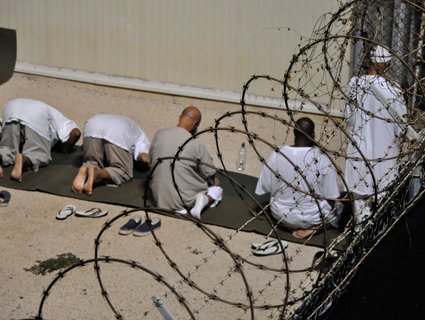 A little-noticed section of the defense-spending bill pending before Congress would technically force the secretary of state, the secretary of defense, and the director of national intelligence to personally approve the transfer of every suspected Al Qaeda-affiliated detainee in US custody, according to White House and Pentagon officials. The result? A potential bureaucratic pileup that could interfere with eventual plans to withdraw from Afghanistan.

Concerned about the prospect of released Guantánamo detainees engaging in terrorism, Congress passed legislation in 2010 that placed tight restrictions on detainee transfers. Pentagon General Counsel Jeh Johnson has called the rules “onerous and near impossible to satisfy,” noting that not a single detainee has been transferred out of Gitmo since the new requirements took effect last year. The rules require the secretary of state, defense secretary and director of national intelligence (DNI) to review and sign off on every detainee transfer out of Gitmo, essentially promising that the individual in question will never again pose a threat to the United States.

In a Senate vote that could come as early as next week, Congress is now trying to extend the detainee rules—and go a step further. The updated provision would broaden the current Gitmo restrictions, forcing those cabinet-level officials to green-light the handoff of every suspected Al Qaeda-linked detainee in US custody. The measure would not apply to detainees currently in US custody, but rather to those captured a month after the law takes effect.

With the United States withdrawing from Iraq by the end of the year, the bill likely won’t make it through Congress in time to cause problems there. But it could create a logistical nightmare in Afghanistan, according to administration and Pentagon officials. Since the Taliban itself is considered to be a force affiliated with Al Qaeda, the language could apply to any number of suspected insurgents captured in Afghanistan. The number of detainees held at Bagram Prison in Afghanistan has more than quadrupled since Obama took office, from 600 during the Bush administration to at least 2,600 today, according to Human Rights First.

“The certification requirements that they are proposing to extend far beyond Guantánamo set an unreasonably high standard that effectively blocks transfers that our counterterrorism professionals believe are in our national interest,” says a senior administration official. “There is a very significant concern that this provision would apply to a lot of people, and many of them in Afghanistan.”

Section 1031 of the Senate version of the National Defense Authorization Act “affirms” that members of Al Qaeda or associated forces are eligible for indefinite military detention. Section 1033 outlines restrictions on transferring detainees from Gitmo, which requires that the secretary of state, the defense secretary, and DNI personally approve the transfer of such detainees to third countries. But a phrase in Section 1032 also makes it so that individuals whose detention is mandated under 1032 can only be transferred if the requirements of 1033 are met. (The Section 1033 requirements can only be bypassed with a national security waiver that still requires the approval of all three top-level officials.)

“This extension could cause serious problems,” says Robert Chesney, a national security expert who teaches at the University of Texas School of Law. “Requiring cabinet-level officials to sign off on each individual transfer in that potentially high-volume setting makes little sense.”

The administration has registered a host of objections to the detention provisions in the Senate bill—which open the door to the military detention of US citizens, among other things—and last week threatened to veto the legislation if it passes. Nevertheless, the bill may have enough votes in the Senate and House to override a veto.

In Afghanistan, detainee transfers are usually handled by Afghan and American civilian and military officials. “The logistical considerations are massive for these sorts of things,” says a senior defense department official. “The people on the ground that are doing our counterterrorism work need as much flexibility as we can possibly extend to them.”

While the logistics themselves are a problem, the provision would also effectively make the secretary of defense and DNI personally responsible should any former detainee join a terrorist group in the future. The measure, says Chris Anders, legislative counsel for the American Civil Liberties Union, creates a scenario in which you “have [cabinet-level officials] one-by-one certifying the transfer of each and every sheepherder that is being held by the US before pulling out.” The nation’s top national security officials could see their time consumed by reviewing detainee cases one at a time, when the country is still fighting one war and winding down a second.

The restrictions may have initially been intended to discourage the administration from transferring detainees out of Gitmo to countries where they might later be released—but, in their current form, they create bureaucratic hurdles that make it extremely difficult to hand detainees over to Afghan authorities, a necessary prerequisite for withdrawal.

“We are trying to help [Afghanistan] build up capacity for detention and criminal prosecutions,” the senior administration official says. “The objective here is not to stay in Afghanistan forever and run detention operations.”