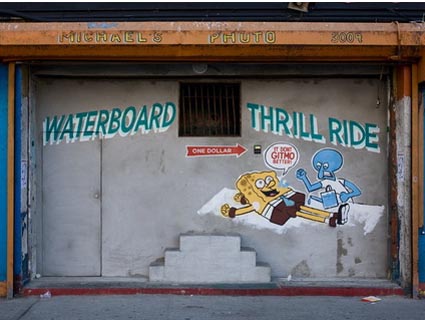 The defense spending bill currently under consideration in the Senate would authorize the indefinite military detention of Americans suspected of terrorism, mandate indefinite military detention for non-citizens apprehended in the US, and make it almost impossible to transfer detainees in Afghanistan out of US custody. The Obama administration has already threatened to veto the legislation.

But the proposed law could still get worse: on Friday, a Republican senator proposed repealing Obama’s ban on torture.

Senator Kelly Ayotte (R-N.H.), who won her seat in the 2010 GOP wave, has spent much of her time in the Senate trying to militarize all counterterrorism operations and reinstitute Bush-era interrogation policies. Last week, backed by Senators Saxby Chambliss (R-Ga.) Lindsey Graham (R-S.C.) and John Cornyn (R-Texas), Ayotte proposed an amendment to the defense bill that would legalize torture.

The amendment, which purports to authorize “lawful interrogation methods,” actually rescinds Obama’s 2009 executive order banning torture. It directs the secretary of defense, attorney general and director of national intelligence to adopt a “classified annex” to the Army Field Manual, complete with a list of interrogation methods that could be used by the inter-agency High Value Interrogation Group (HIG). A coalition of civil liberties and human rights groups has called on the Senate to reject the amendment, stating it would “revive the use of torture and other cruelty in U.S. interrogations.”

Key here is that although Ayotte’s amendment states the methods must “comply with all applicable laws,” including laws against torture, the methods under consideration are classified. Republicans reject the idea that the Bush-era interrogation techniques were illegal, and the Obama administration’s obstruction of accountability for Bush-era abuses means that there is no definitive ruling from the courts on which methods actually constitute torture. The amendment thus leaves a gaping loophole allowing for the return of Cheneyesque torture policies should a torture-friendly Republican administration take office. Ayotte endorsed Mitt Romney over the weekend, and Romney has mentioned her as a possible vice presidential pick.

Ayotte’s fixation on returning to Bush-era interrogation techniques isn’t shared by current national security officials. Ayotte attempted to prod Defense Secretary Leon Panetta during his June confirmation hearings into suggesting there was something inadequate about the HIG’s methods (which don’t involve torture), Panetta argued “It’s working pretty well.” In July, John Dempsey, the chairman of the Joint Chiefs of Staff, expressed pride in having helped craft the Army Field Manual standards, and said they reflected “the nexus of the importance of gaining intelligence with the importance of preserving our values as a nation and as an army.” The current head of the CIA, David Petraeus, has said the “techniques that are in the Army Field Manual that lays out how we treat detainees, how we interrogate them. Those techniques work.” Ayotte wants to give national security officials authority they haven’t asked for to use techinques they don’t need.

The Senate is set to take up the defense spending bill the week after Thanksgiving. It’s unclear whether Ayotte’s amendment has the votes to pass, but if it does that’s just another reason for the administration to veto the bill. As if they didn’t have enough already.