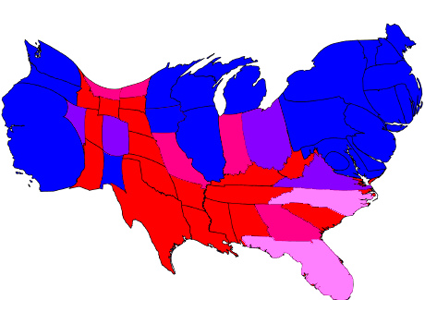 Over the past six months, someone—or a group of someones—has spent hundreds of thousands of dollars to fund an effort to change the rules of the 2012 presidential election to make it very difficult for President Barack Obama to win reelection. But the shadowy lobbying group mounting this campaign hasn’t disclosed its donors—and under current law, it doesn’t have to.

In two states, Pennsylvania and Wisconsin, GOP legislators have introduced bills that would change how electoral votes—a candidate needs 270 of the 538 to win the presidency—are awarded in a presidential election. Under the current system, the winner of the statewide popular vote receives all of the electoral votes from that state.

Because Republicans will draw the boundaries of the congressional districts in both states, the new rules would mean that Obama could win the states but still receive fewer electoral votes than his Republican opponent. Should a Republican split the states’ electoral votes with Obama (even if Obama draws more votes), that could provide the GOPer with the margin of victory in a close race. (Under the US Constitution, it is up to the states to allot electoral votes as they see fit.)

In Pennsylvania, a secretive nonprofit group called All Votes Matter has been pushing the electoral vote scheme since May. All Votes Matter has close ties to the Pennsylvania GOP—it hired a number of former top state Senate staffers-turned-lobbyists. “It was pretty much the Senate GOP All Star Lobbying Team and [former state House Democratic Counsel Bill] Sloane,” Peter DeCoursey, the bureau chief for Capitolwire, a newswire that’s read religiously by Harrisburg insiders*, explained in September.

Between April and June, the group spent $77,700 to lobby state officials to support legislation to implement this scheme. By early September, GOP Gov. Tom Corbett and the state House and Senate leaders, Mike Turzai and Dominic Pileggi, both Republicans, had all expressed their support for the idea. It was “the best $77,700 anyone ever spent on potential legislation,” DeCoursey wrote. “The entire state governing wing [was] for a bill that [hadn’t] been introduced yet.”

A week later, though, the landscape had changed significantly. Mother Jones and other national media outlets drew widespread attention to the story, and the state GOP chairman and the vast majority of its congressional delegation came out against the plan.

All Votes Matter wasn’t fazed. It kept lobbying. Charles Gerow, a spokesman for All Votes Matter, told DeCoursey that the group had raised $300,000—and already spent $180,000. But Gerow wouldn’t tell reporters where the money was coming from, saying only that “civic-minded citizens” had provided the dough. This week, the group filed new lobbying disclosure forms revealing that it spent $186,882 on lobbying between July and September.

All Votes Matter doesn’t disclose its donors “as a matter of policy, per the request of many of them,” Gerow told Mother Jones. “It’s their legal right not to have it disclosed, and they don’t want it disclosed so they’re not subject to media calls and other potential harassment,” he added. All Votes Matter has “fully and completely complied with the law and will continue to do so,” Gerow said, and “if those who don’t agree with the law want to change it, it certainly is their right to do that.”

There’s no law that says All Votes Matter has to disclose where its money comes from. But opponents of the electoral college changes are outraged that voters are being kept in the dark about who’s behind such a potentially consequential reform. “This is an effort to fundamentally change the way Pennsylvania conducts its presidential elections, in my view to rig the election,” says Democratic state Sen. Daylin Leach. “They raised an awful lot of money very quickly—$300,000 in just a few days. We’re all curious where that level of funding comes from.”

Carolyn Fiddler, a spokeswoman for the Democratic Legislative Campaign Committee, which assists Democrats in state-level races around the country, says: “Given the potential impact of this measure this group is lobbying for, not just for Pennsylvanians but for presidential politics and Americans in general, the public has a right to know who’s behind it.”

Transparency advocates say it’s not enough to just know who is doing the lobbying—voters should also know who is paying the bills. “The old adage is that actions speak louder than words, and deeper pockets allow for more action,” says Michael Beckel, a spokesman for the Center for Responsive Politics. “Without disclosure, the public is unable to fully hold accountable the companies and organizations that have hired these lobbyists in the first place.”

In Wisconsin, it’s even less clear who’s behind the electoral college shenanigans. The Wisconsin Democratic party has alleged that the bill there, sponsored by GOP state Rep. Dan LeMahieu, was written by the American Legislative Exchange Council, a conservative group funded by the billionaire Koch brothers, among others. But so far, the Dems haven’t been able to produce any evidence to back up their charge, and emails from LeMahieu’s office Mother Jones obtained via an open records request showed no evidence of any outside involvement in the drafting of the law.

Democratic state legislators are worried that the Pennsylvania and Wisconsin bills are part of a broader effort. If GOP legislatures in Pennsylvania, Wisconsin, and other states where Democrats typically win presidential elections pass the electoral college changes All Votes Matter is proposing, it would mean “the end of competitive presidential elections and certainly people’s confidence that the process is fair,” Leach maintains. “To think that some secret group somewhere is rubbing their hands together and putting millions of dollars into this effort—and we can’t even know who they are—I think that’s obscene.”

*Correction: An earlier version of this story referred incorrectly to Capitolwire. It is a newswire with direct subscribers and newspaper customers, not a newsletter.