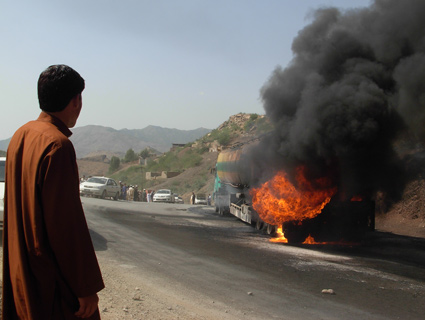 The aftermath of a recent militant attack on a NATO oil tanker.Yasir Shinwari/Zuma

Among them: Pakistani military officials have long feared that Americans have designs on Pakistan’s nuclear arsenal—a suspicion exacerbated by the raid that killed Osama bin Laden. So Pakistan’s nuclear watchdogs took action, making some strategic tweaks to how it transports its weapons:

[I]nstead of moving nuclear material in armored, well-defended convoys [Pakistan] prefers to move material by subterfuge, in civilian-style vehicles without noticeable defenses, in the regular flow of traffic. According to both Pakistani and American sources, vans with a modest security profile are sometimes the preferred conveyance. And according to a senior U.S. intelligence official, the Pakistanis have begun using this low-security method to transfer not merely the “de-mated” component nuclear parts but “mated” nuclear weapons…

Pakistani and American sources say that since the raid on Abbottabad, the Pakistanis have provoked anxiety inside the Pentagon by increasing the pace of these movements. In other words, the Pakistani government is willing to make its nuclear weapons more vulnerable to theft by jihadists simply to hide them from the United States, the country that funds much of its military budget.

Are the Pakistanis just crazy-ass paranoid? Perhaps not: For years now, as Goldberg and Ambinder report, Delta Force, Seal Team Six, and Joint Special Operations Command operatives have been refining a plan to secure and “render safe” any live nuclear weapons in Pakistan.

As for recent claims by Mike Mullen, the outgoing chairman of the Joint Chiefs of Staff, that the “Haqqani network acts as a veritable arm of Pakistan’s Inter-Services Intelligence agency”:

A 2008 National Intelligence Estimate concluded that the ISI was providing “intelligence and financial support to insurgent groups—especially the Jalaluddin Haqqani network out of Miram Shah, North Waziristan—to conduct attacks against Afghan government, [International Security Assistance Force], and Indian targets.” By late 2006, according to the intelligence historian Matthew Aid…the U.S. had reliable intelligence indicating that Jalaluddin Haqqani and another pro-Taliban Afghan warlord, Gulbuddin Hekmatyar, were being given financial assistance by the ISI (which of course receives substantial financial assistance from the United States).

Goldberg and Ambinder also report that Mullen was particularly aggrieved by reports that the Pakistani government was involved in the murder of journalist Saleem Shahzad:

Sources we spoke with say the order was passed directly to General Pasha, the head of the ISI. According to one of the sources, an official with knowledge of the intelligence, Pasha was told to “deal with it” and “take care of the problem.” According to this source, Mullen was horrified that his Pakistani interlocutors of many years had been involved in orchestrating the killing of a journalist. “It struck a visceral chord with him,” the source told The Atlantic, recalling that Mullen had slammed his desk and said, “This is old school.”

The story concludes noting that the US must maintain its dysfunctional relationship with Pakistan to prevent it from going to war against India, to keep tabs on its nuclear arsenal, and because the country is barely holding itself together. There’s nothing particularly groundbreaking about that grim conclusion. What is shocking: The depths to which Pakistan perceives the US as a threat, and the extreme lengths it has taken to secure its interests, both nuclear and otherwise. Read the entire thing.