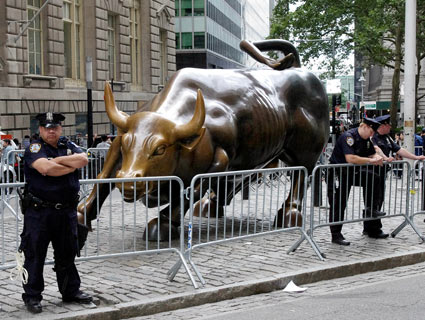 In 1729, when Ireland had fallen into a state of utter destitution at the hands of its British landlords, Jonathan Swift published a famous essay, “A Modest Proposal for Preventing the Children of Poor People in Ireland from Being A Burden to Their Parents or Country, and for Making Them Beneficial to the Public.”

His idea was simple: The starving Irish should sell their own children to the rich as food.

His inspiration, as it happened, came from across the Atlantic. As he explained, “I have been assured by a very knowing American of my acquaintance in London, that a young, healthy child well nourished is at a year old a most delicious, nourishing, and wholesome food, whether stewed, roasted, baked, or boiled; and I make no doubt that it will equally serve in a fricassee, or a ragoust.”

Inspired in turn by Swift, I want to suggest that we put in motion a similar undertaking: On January 16th, Martin Luther King Day, citizens from around the country should gather at the New York Stock Exchange on Wall Street. Let’s call this macabre gathering—with luck and even worse times, it should be mammoth—”We Surrender” or “Restore Debtor’s Prisons” or “De-Fault Is Ours” or “Collateralize Us.” And plan on a mirthful day of mourning.

The basic idea is that we offer ourselves up, 99 percent of us anyway, on the altar of high finance as a sacrifice to the bond markets. It was Karl Marx who first observed that high finance is “the Vatican of capitalism.” How right he turned out to be—right with a vengeance!

The Death of Democracy

Whole governments, democratically elected, are collapsing, or abdicating on orders from our secular version of the papacy. Who will weep for the passing of Italian Prime Minister Silvio Berlusconi? Not many, surely. Still, it’s appalling that, in Italy as in Greece, governing authority has been usurped by technocrats, elected by no one, answerable only to the European institutions of high finance that installed them in power.

At last count, eight governments of the European Union have come and gone, suffering the wrath of our new god. Other European governments barely hang on and scurry to curry favor with the bond market, proposing in effect to eat their own children and the futures of 99 percent of their people, if that’s what it takes to make high finance happy. More will follow. By the time this piece was published, who would be surprised if yet another government had bitten the dust.

What about here in the US? That capitalism and democracy go together (like love and marriage in that old song) has been the imperial boast conveyed to the rest of the world by American banks and diplomats and presidents and Marines for a century—and more recently, by crony capitalist outfits like KBR and predator drones. Today, at home and abroad that particular gospel seems a sorry piece of hypocrisy. Capitalism has become a synonym for—to use an old word on its way back just in time—plutocracy, not democracy. The Obama administration like the Bush administration before it, and the one before that, and the one before that, has bent its knee to “the Vatican of capitalism.”

Anticipating Swift, we are already eating our own children or, at least, the futures available to them. My suggestion is to make the most of that reality.

When we assemble on January 16th, we should arrive as supplicants, bringing the deeds to our homes, if we still have them. We could come dressed as credit-default swaps or collateralized debt obligations. (Use your imagination!)

You’ll want to turn in your subprime mortgage documents. And do you really need that mobile home or tent? And certainly, you’ll want to offer up your children to Wall Street if they’re young enough to make a “delicious” and nourishing meal. If a bit older, haul along that creaky swing-set from your backyard, or dilapidated blackboards and outmoded computer consoles from your child’s underfunded, disintegrating school. Bring with you the paints, recorders, and stage props once used by art, music, and theater teachers, but made superfluous when their programs were cut by schools too poor to afford them.

If your children are older still, and waterlogged from the college loans that put them “underwater” before they even had their first jobs, why not donate those debts as securitized gifts to the Street? Better yet: give back their college diplomas.

If you can, cart along vats of heating oil or coal bins to symbolize the winter fuel that you can no longer afford. (Thank god for global warming!) Declare yourself undocumented or at the very least “undeserving” (a prematurely retired and wonderfully apt word used by the 1 percent back in the late nineteenth century to describe those who apparently preferred starving to working). Turn in your food stamps and unemployment insurance checks.

If you happen to have a job, return it or tithe a portion of your wages or pension for the cause.

Give back your votes; they do you no good, but might placate The Street. If you’re not too shy, donate your medical records, x-rays, CAT scans and IV drips; you won’t need them anymore since the odds are you won’t be able to afford health care, and Wall Street can use them. After all, who is more endlessly ingenious when it comes to turning misery into money?

Here’s a really big January 16th gesture if you’re up for it: securitize your body parts. What, for example, is a leg- or ear- or brainpan-derivative really worth on the open market? You don’t know, but Wall Street will. And you can think of it as your contribution to solving the deficit dilemma, which keeps the 1 percent awake at night.

My poor imagination is hardly up to the task of imagining all the ways in which we might express our fealty to Wall Street’s financiers. But we, the partisans of OWS, are if nothing else a remarkably creative bunch. I’m confident that, when we get together on the 16th of January, the world will marvel at our inventiveness.

An Archipelago of Isolation Chambers

However “Swiftian” our mood, signage, and costumes, however much we retain the vital capacity to laugh at our own predicament and make fun of our tormentors, what I’m proposing is, in the end, serious business. A massive “Collateralize Us” day is doable—and through its wit could embolden us and shame those in charge of the care and feeding of the 1 percent. More important, it could put in the most graphic terms, where everyone could see it, a core indictment of a system in ruins and perhaps even hint at what might replace it.

Why pick a single day and a single place to symbolically immolate our own children (and their children to come)? Why not continue to occupy as many places as we can on all days? We should!

However, the simple epiphany that OWS allowed millions to experience was its blunt discovery that Wall Street, the world of financial mis-engineers and predatory speculators, was the taproot of our multiple dilemmas. For people around the globe, that street remains, at least symbolically, the site where our misbegotten Age of Austerity was born. So it makes continuing sense to persevere in pressing that singular insight, in pursuing a determination to confront a dysfunctional system where it originates.

So, too, local governments around the country have consistently used their police forces to cage, disperse, or otherwise fragment local occupations and may even have coordinated their police “occupations” with one another. “Our streets” are ever less “ours” in any meaningful sense. The geography of democracy is being transformed into an archipelago of isolation chambers.

But that won’t be the case if untold numbers assemble in New York on the 16th. If every movement and organization that has had anything to do with OWS over these last months were to collaborate in mobilizing, even on the bitterest of January days, the streets will again be “ours.”

Then, of course, there is the resonant significance of the day itself. Martin Luther King was a lawbreaker for justice. So, too, were all those who defied “legitimate authority” alongside him. I’m not suggesting we break the law. I do suggest we exercise rights that are growing weak, and will grow weaker, if allowed to atrophy further. And I do suggest as well that we, like King, become the midwives of new law.

If credit-default swaps and structured investment vehicles are legal, as they are, and if marching in the streets is becoming ever less so, as it is, then on January 16th we should begin to turn that kind of preposterous world upside down. What was lawful shall become criminal and what was denied to the people shall be taken by them and made good law.

When we gather on the 16th of January at the corner of Broad and Wall streets—don’t worry, you’ll find it!—in an act of unprecedented symbolic self-sacrifice, we might also make one modest request. With Martin Luther King in mind, let us propose that January 16th also become Jubilee Day.

Such days were a more or less regular part of the calendar in biblical times and long after. It was the moment when common people were relieved of their crushing debts and the world was allowed to start over again. Our own version of such a “day of forgiveness” would focus on all the debts with which the 1 percent have burdened so many working people.

On that day, we might resume a conversation about how to start the world anew. It would undoubtedly be a conversation about all the vital resources that everyone depends on to enjoy life, be healthy, and have a future worthy of bequeathing to our children. It would certainly be about how these must never again be allowed to congeal in the hands of an infinitesimal elite organized in a tiny number of private institutions indifferent to the commonweal and immune from censure.

See you on the 16th. Bring your children.

Steve Fraser is Editor-at-Large of New Labor Forum, a TomDispatch regular, and co-founder of the American Empire Project (Metropolitan Books). He is a labor and economic historian whose most recent book is Wall Street: America’s Dream Palace. To stay on top of important articles like these, sign up to receive the latest updates from TomDispatch.com here.