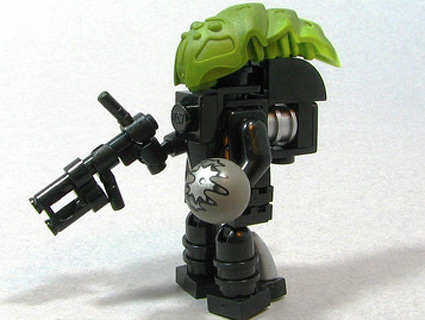 The Obama administration insists that this won't be your dark reality any time soon.<a href="http://www.flickr.com/photos/jovian_dreams/4003021610/">:jovian:</a>/Flickr

News from the past week failed to bring much comfort: The economy is still growing too sluggishly, the Pakistanis are getting even more reckless with their nuclear arsenal, Greece is in turmoil, and true love is dying. But at least the White House can guarantee that we’re safe from imminent war with bellicose Martians.

Well, for now, at least:

The White House says there is no evidence of life beyond Earth — and no cover-up by the government — but scientists are still searching…Phil Larson, who works on space policy and communications at the White House Office of Science & Technology Policy [OSTP], also [notes] that “there is no credible information to suggest that any evidence is being hidden from the public’s eye.”

No, this wasn’t from a scene in Invasion of the Pod People; last week, Larson, a research assistant in the OSTP, responded to two open petitions to the president, one demanding that federal authorities “formally acknowledge an extraterrestrial presence engaging the human race” and one calling for “open Congressional hearings to allow the people to become aware of [government interactions with extraterrestrial beings] through those whose voices have been silenced by unconstitutional secrecy oaths.”

This pair of “We the People” petitions were signed by thousands of concerned citizens—12,078 unique signatures for the former, 5,387 for the latter—deeply anxious over the prospect of something along the lines of this happening:

Under the White House’s “We the People” guidelines, any petition that meets the signature threshold (then 5,000) within 30 days of submission “will be reviewed by the Administration and an official response will be issued.” (The review process, though, can easily result in the non-response of a rejection, as seen with multiple petitions regarding drug laws.) In the White House’s official response, titled “Searching for ET, But No Evidence Yet,” Larson wrote:

The U.S. government has no evidence that any life exists outside our planet, or that an extraterrestrial presence has contacted or engaged any member of the human race…However, that doesn’t mean the subject of life outside our planet isn’t being discussed or explored. In fact, there are a number of projects working toward the goal of understanding if life can or does exist off Earth…

Many scientists and mathematicians have looked with a statistical mindset at the question of whether life likely exists beyond Earth and have come to the conclusion that the odds are pretty high that somewhere among…the universe there is a planet other than ours that is home to life…[T]he odds of us making contact with any of them—especially any intelligent ones—are extremely small, given the distances involved. But that’s all statistics and speculation.

The real mystery is why the White House would choose to acknowledge, let alone reply, to these particular petitions. The issue isn’t that there are way more topical petitions out there, or even that there’d be zero political consequences to ignoring a petition about aliens; it’s also that there is absolutely no way—short of having Jay Carney confirm the existence of secret intergalactic peace talks between Barack Obama and Mikhail Sergeyevich Alien-achev—to respond in a manner that would pacify the true believers. For instance, Paradigm Research Group (PRG), an advocacy group pushing for UFO-related “politics of disclosure,” issued an update stating that the White House’s response, authored by some “low level staffer,” was insufficient and “unacceptable.” (PRG is working to promote a follow-up petition and vows to keep “the Disclosure issue front and center within this attempt at participatory democracy…”)

Considering Larson’s ET-themed assignment, it’s hard not to believe that the OSTP is hazing their research assistants with fool’s errands. However, Larson’s response could also be interpreted as the White House’s snide, symbolic response to another recent online petition—the one requesting the Obama administration actually take these petitions seriously.