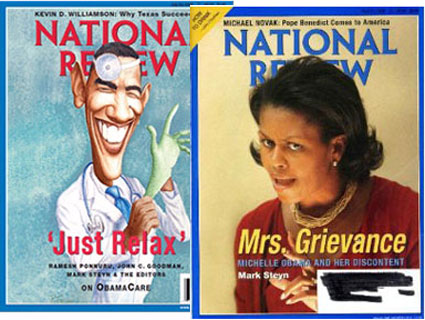 The National Review is the nation's leading authority on blackness.

National Review‘s Victor Davis Hanson has written the dumbest column of the year in defense of Herman Cain, marching out every possible cliché of right-wing victimhood, infantile racial identity politics, and gender stereotypes.

Beginning from the premise that Republicans suffer from sex scandals but Democrats don’t, Hanson mentions one Democrat who was impeached (Bill Clinton), another who resigned in disgrace (Eliot Spitzer), and another who is facing criminal charges over allegedly spending campaign funds to help hide his mistress (John Edwards).

Hanson would have you believe that Republicans George H.W. Bush, Dan Quayle, John McCain, and Supreme Court Justice Clarence Thomas are supposed to envy these men for avoiding any real consequences for their transgressions. “Both supporters and detractors agree that Cain should know by now that alleged misdemeanors by Republican frontrunners are always more serious than known transgressions by Democratic rivals,” Hanson writes, having disproved his own argument. Presumably with a straight face, Hanson glibly mentions former segregationist Republican Strom Thurmond’s “wandering hands,” which is a euphemism for “former white supremacist who fathered a black child out of wedlock and managed to keep it a secret until after his death.”

Hanson goes on to suggest that sexual harassment is basically just casual tool for ambitious women who can’t get ahead by other means (“In my time as a student and a professor, I saw four or five ‘asymmetrical’ relationships in which much younger attractive graduate students made fools of aging nerdish professors, always to their own career advantage”). He reminds his readers that this may be another case of oversensitive women who can’t take a joke, like back in the good old Don Draper days (“The office coffee break with colleagues was now more explicit and yet more prudish than its 1950s counterpart—in the sense that almost no topic was taboo, and yet any careless flippant sexual remark could boomerang as a career-ending offense”). Then, assuming the alleged victims couldn’t be more excited to be reliving this experience, Hanson describes the allegations against Cain as comparable to a second bout of cancer (“For Cain, who at first seemed blindsided and defensive, the hysteria must seem like yet another round of toxic chemotherapy”).

But that’s not quite enough. No, Hanson, who like other Republicans has spent the last three years complaining that “the bigot card…is now not much more than a political ploy to win an argument through calumny when logic and persuasion have failed,” just goes ahead and says the whole thing is due to liberal racism. “Black authenticity, as defined by Southern mannerisms and darker complexion, amplified by conservatism or traditionalism, earns liberal unease,” reads an op-ed in National Review, the magazine that endorsed white supremacist terrorism as a means to stop Martin Luther King Jr. and the Civil Rights Movement. The real problem is that Herman Cain is really black, while Barack Obama is the kind of black that white people like:

Again, the comparison with Obama is volatile: Cain is authentically African-American and of an age to remember the Jim Crow South; Obama, the son of an elite Kenyan and a white graduate student, came of age as a Hawaiian prep-schooler, whose civil-rights credentials are academic. Cain’s lack of experience and seemingly embarrassing ignorance about the right of return or nuclear China are amplified by his unaffected style, whereas Obama’s similar gaffes (57 states) and buffoonery (inflating tires to preclude drilling for oil) are mitigated by metrosexual cool. After all, we live in an age when Herman Cain, with his black hat, his deep Southern cadences, and his ease among tea-party crowds, is suspect, whereas Barack Obama booms on about “millionaires and billionaires” while golfing, jetting to Martha’s Vineyard, and shaking down demonized corporate-jet owners at $35,000 a pop.

After attacking the Affordable Care Act as “reparations,” Wall Street Reform as “racial quotas,” higher marginal tax rates as the stuff of Zimbabwe tyrant Robert Mugabe, and watching the president forced to literally show the country his papers, it’s a little late for conservatives to start arguing the president isn’t “authentically black.” Of course, the assumption that it’s within Hanson’s authority to police whom black people accept as a member of the community is itself a noxious form of paternalism. His argument doesn’t actually work if white people don’t get to decide for black people what being black means. It is, perhaps, the first time ever that someone has argued that being “at ease” with white conservatives is proof of how authentically black you are, but you work with what you got.

The comparison between Cain and Obama isn’t so much “volatile” as it is flattering to conservatives who, having latched onto Cain as a racial alibi and an explanation for the fact that the party of Lincoln hasn’t broken 20 percent of the black vote since Richard Nixon, desperately need a symbolic figure of racial absolution. The only time conservatives aren’t using trite arguments about black authenticity as an explanation for ongoing racial disparities is when they’re relying on them to show everyone how well they understand the soul of the Negro. Hanson doesn’t bother to explain how it is that the overwhelming majority of black people haven’t discerned that Barack Obama is a fraud and that Herman Cain is the second coming of Marcus Garvey, but that’s because their “brainwashed” opinions don’t actually matter. The sole purpose of establishing Cain’s racial authenticity, premised as it is on Hanson’s rather limited view of what constitutes “the black experience,” is for Hanson to flatter himself and his ideological allies as racially enlightened.

Back in 2009, conservatives, including Hanson, accused Obama of offering a kind of racial absolution he could not provide. Now they’re demanding the same thing out of Herman Cain’s faltering candidacy, and they’re determined to get it even if the sexual assault and harassment allegations do what Cain’s complete lack of knowledge on public policy did not. As long as Cain can be portrayed as a martyr to librul racism, his candidacy can’t really be seen as a failure.