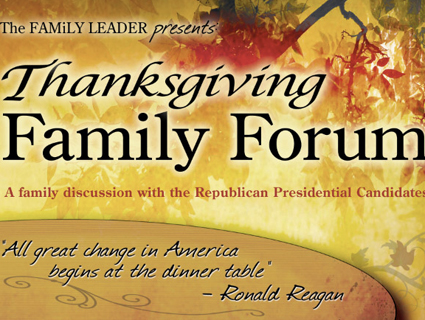 <a href="http://www.thefamilyleader.com/thanksgiving-family-forum">Courtesy of the Thanksgiving Family Forum</a>

On Saturday, the GOP presidential field—sans Mitt Romney and Jon Huntsman—will gather at the First Federated Church in Des Moines for what’s being billed as the “first of its kind” Thanksgiving Family Forum. It’s a chance for the candidates to make their pitch to the state’s social conservative caucus voters. Frank Luntz, the pollster and Fox News personality who’s moderating the event, promises there will be “no gotcha questions by the panel. No spin by the politicians. Just an authentic discussion among the people who seek to lead this great nation.” Well, he’s probably right about the gotcha questions.

The absence of Romney and Huntsman is notable because they are both Mormon—a serious issue at the most recent social conservative confab. But in light of recent events, perhaps the bigger story is this: The event is being co-sponsored by the National Organization for Marriage (NOM!), which just this week promoted an op-ed arguing that gays were responsible for the Penn State sexual abuse scandal.

Per Equality Matters, NOM’s site excerpted a piece from anti-gay activist Michael Brown. The column went after Rush Limbaugh, of all people, for not having the courage to publicly link what happened at Penn State to the gay agenda:

He takes on the president, the Congress, and the media (not to mention his derisive attacks on foreign leaders and even radical Muslims), but there’s one group he won’t take on, one subject he won’t touch.

What is it that, in his words, could end his career? What is it about the Penn State scandal that is “glaring; it’s right in front of everybody,” and yet “nobody has the guts to actually give the explanation for what was going on and why there was trepidation in reporting it”?

Could it be that the sex abuse scandal involved a man allegedly abusing boys, meaning that the acts were homosexual in nature? And could it be that even Rush Limbaugh didn’t have the guts to address this?

Huntsman, who not coincidentally has failed to gain traction in the polls, has been the GOP’s voice of reason on social issues. Asked about his support for civil unions at a July debate in Iowa, Huntsman stated: “I think this nation can do a better job when it comes to equality.” Earlier this year, Romney, Rep. Michele Bachmann (R-Minn.), and Texas Gov. Rick Perry signed NOM’s marriage pledge, commiting to support a constitutional amendment to ban gay marriage and to “appoint a presidential commission to investigate harassment of traditional marriage supporters.” You can watch the forum, Saturday at 5 p.m., here.