As Washington comes to terms with the supercommittee’s failure to extract another $1.2 trillion in savings from the federal budget, the conversation is quickly shifting back to measures that could actually juice the economy.

One of the more obvious ones is to extend unemployment benefits. Another is renewing the payroll tax cut President Obama signed into law last December, which reduced the employee share of the Social Security payroll tax from 6.2 to 4.2 percent. According to the Tax Policy Center, 121 million families benefited in 2011, at a cost of roughly $120 billion.

But the payroll tax cut expires on January 1. Views about what could happen if the payroll tax cut isn’t extended vary, the Washington Post‘s Jia Lynn Yang reports. Goldman Sachs estimates that a failure to extend the payroll tax cut would stymie GDP growth by two-thirds of a percentage point in early 2012, while market research firm Macroeconomic Advisers thinks the slowdown would be closer to 0.5 percent.

But what does that mean for workers across the income spectrum? As Kevin Drum explained back in August:

Poor people, who are the most likely to spend the money, pay little or no payroll tax in the first place. And richer people, who are the most likely to save it, don’t usually have any big debt problems. Most of the benefit of a payroll tax cut, therefore, is limited to a smallish segment of the public that’s (a) rich enough to get a significant amount from a payroll tax holiday but (b) poor enough to either spend it all or use it to pay down debt.

But just how much more does it put in the pockets of poorer people? The Center on Budget and Policy Priorities chartified some answers: 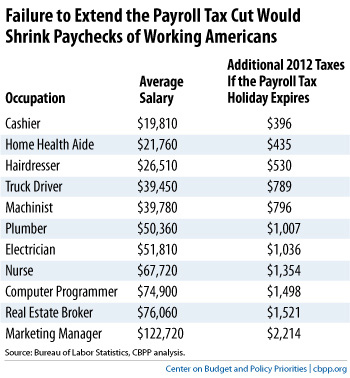 Failing to extend the payroll tax holiday would take a bite out of the wages of workers at all income levels. But it’s workers at the low end of the spectrum that would feel the pain most acutely.

Republicans—even those who’ve backed the payroll tax cut in the past—are lining up against it this time around, as Suzy Khimm wrote on Monday. That’s because it’s a signature piece of President Obama’s jobs plan, and blockading his agenda is central to their efforts to take back the White House in 2012.

But given the fact that the payroll tax cut is a proven stimulative measure (even if it’s not necessarily the most effective one, as Kevin pointed out), Obama isn’t likely to abandon it, and Republicans know this. So expect them to use its extension as a bargaining chip/hostage in a future showdown—one over scaling back scheduled cuts to defense spending that will result from the supercommittee’s failure to reach a deal.