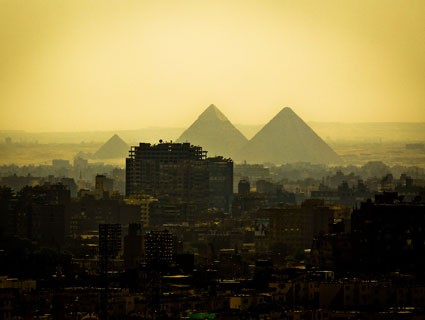 Tablet‘s Lee Smith thinks “moderate Islamist” is an oxymoron, and that the “moderates” are “more dangerous than the extremists by a matter of magnitude.”

Indeed, “moderate” is a word that gets thrown around recklessly when it comes to the Islamist groups that comprise this new Muslim Brotherhood crescent. Consider the leader of al-Nahda, Rashid Ghannoushi, who, after many years of exile, may well be Tunisia’s next prime minister. He is routinely described as a moderate, even though he has praised the mothers of suicide bombers and believes that the “region will get rid of the germ of Israel.”

Perhaps to better understand the term “moderate” we might consider Islamist parties in the context of how they exercise power in their local environments. Where Osama Bin Laden spoke of a revived caliphate that would unite the umma, Islamists like Ghannoushi, Erdogan, and the Muslim Brotherhood are focused on their own national projects. Extremist Islamist outfits like Bin Laden’s original al-Qaida live in caves and rely on the support of Middle Eastern governments in order to accomplish operations like blowing up planes. So-called moderate Islamist parties, on the other hand, win electoral contests that leave them in charge of Middle Eastern governments, security services, and militaries with artillery, tanks, air forces, and navies.

It’s not all that useful to use fuzzy feelings towards Israel as a way to discern the “moderation” of Islamists.

Unfortunately, everyone in the region pretty much hates Israel, Islamist or otherwise. A 2010 Zogby International poll found that 70 percent of citizens in Egypt, Jordan, Lebanon, Saudi Arabia, the United Arab Emirates and Morocco sympathized with both Hamas and Fatah “to some extent.” Seventeen percent of responsdents cited Hamas leader Khalid Meshaal when asked which Palestinian leader they “admire most.” (Current Palestinian President Mahmoud Abbas got just 15 percent.) This is despite the fact that Hamas has used suicide terrorism as a tactic against Israel.

It seems almost too obvious to write, but people in the Middle East see the Israeli-Palestinian conflict in a very different light than people in the US, and as a result it’s a poor way to evaluate ideological moderation on other issues.

A more useful gauge of the “moderation” of Islamists would be their willingness to accept democratic institutions and checks on government power that allow minorities and women to be secure in their rights. Tunisia’s Ennahada appears moderate in that respect so far, having pledged not to seek a greater role for religion in Tunisia’s new constitution. That makes them more moderate than say, Egyptian Salafists knifing Christians in the street. Although the degree to which new governments will actually be in control of the military in countries like Egypt remains a really open question, Islamist parties that win elections that leave them in charge of modern militaries will nevertheless also be accountable to their voters for how they use them.