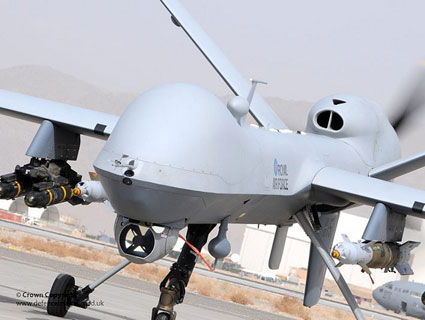 The Wall Street Journal reported Friday that the CIA is reining in the use of its drone program in Pakistan following objections from other agencies, particularly the State Department.

Among the changes: The State Department won greater sway in strike decisions; Pakistani leaders got advance notice about more operations; and the CIA agreed to suspend operations when Pakistani officials visit the US.

Drones are a delicate political issue in Pakistan, where the Pakistani government has long denied (and still denies) that US drone strikes are carried out with its permission. As Marc Ambinder and Jeffrey Goldberg write, US relations with Pakistan have deteriorated even further since the raid on the Pakistani city of Abbotabad in which Osama bin Laden was killed, and Pakistani citizens have grown even angrier about the fact that the US can bomb their country any time it wants. US officials, on the other hand, see the strikes as one of their only options for dealing with militants striking in Afghanistan from across the border, some of whom retain support from the Pakistani Inter-Services Intelligence agency.

There are basically two kinds of strikes the CIA carries out—strikes on specific targets and “signature strikes,” which target groups of individuals the government suspects are militants. How does it know they’re actually militants? It “tracks their movements and activities for hours or days before striking them.” Which is to say, the CIA thinks it’s getting the right people, but it doesn’t always know for sure. And when asked, the government claims that the CIA almost never makes mistakes. White House Counterterrorism Adviser John Brennan said in June that there hadn’t been “a single collateral death” from the drone program in almost a year.

Third-party evaluations of the drone program say otherwise. The Bureau of Investigative Journalism concluded in a report released in August that “at least 392 civilians” were among the estimated nearly 2,500 people killed in drone strikes since 2004. Then there’s the first-hand experiences of Pakistanis who have lost family members as a result of drone strikes.

This isn’t the first time the State Department has sought to rein in the vastly expanded use of drones against suspected terrorists since Obama took office. In September Charlie Savage reported that State Department Legal Adviser Harold Koh was embroiled in a dispute with Pentagon General Counsel Jeh Johnson over the standards for targeted killing in places like Somalia and Yemen, far away from the active zone of military combat in Afghanistan.

In its dispute with the CIA, though, State seems to have had a key ally in its argument that the drone program was harming the US’ ability to convince Pakistan to help the US wind down the war in Afghanistan. According to the Wall Street Journal, the new head of the CIA, David Petraeus, “voiced caution against strikes on large groups of fighters.”