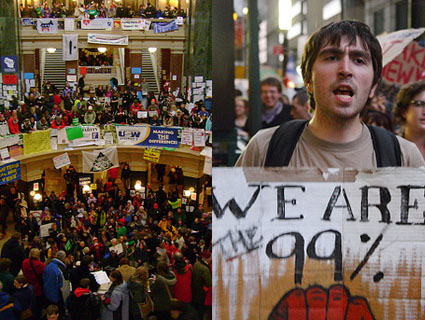 The comparisons were inevitable. As Occupy Wall Street gathers momentum and new allies, progressives have quickly connected it with the other headline-grabbing uprising this year: The mass protests in Wisconsin against Gov. Scott Walker’s attack on labor unions. A statement from leaders of the American Federation of State, County, and Municipal Employees union, which endorsed Occupy Wall Street this week, was typical: “Just as a message was sent to politicians in Wisconsin, a clear message is now being sent to Wall Street: Priority number one should be rebuilding Main Street, not fueling the power of corporate CEOs and their marionette politicians.”

Explore MoJo‘s updated map of protest hot spots nationwide, see how big labor has jumped in, and don’t miss the best of #OccupySesameStreet.

The essential theme connecting events in Madison and New York City is unmistakable. Both represent an economic reckoning at a time of grim unemployment rates and stagnant wages for middle-class Americans. “Both the defense of unions [in Wisconsin] and Occupy Wall Street, which is broader in its definition of the problem, are responding to two or three decades of increasing economic inequality and, until fairly recently, the inability of progressives to address those things,” says Georgetown University historian Michael Kazin, author of American Dreamers: How the Left Changed a Nation.

But the Wisconsin-Occupy Wall Street comparison is a more complicated one in its specifics. The two don’t fit neatly side by side and, in some ways, bear no resemblance at all. Here is a look at how two of the biggest populist protests of the year stack up:

As I reported from Madison in March, labor unions and community activist groups were, from the very beginning, the driving force in the Wisconsin protests. On November 3, 2010, the day after Republicans reclaimed the state Legislature and the governor’s mansion, union leaders began plotting how to respond to the looming assault on organized labor. And when Gov. Scott Walker unveiled his anti-union budget repair bill, and later threatened to sic the National Guard on those protesting his bill, unions marshaled their resources and called every member in their ranks. From their command center in Madison’s only unionized hotel, labor turned out more than a 100,000 supporters in a span of weeks.

Occupy Wall Street is not union-made. It was the anti-capitalist Adbusters magazine that put out the initial call for protesters to flood downtown Manhattan on September 17. Since then the protests have grown almost entirely without institutional support, an organic groundswell without leaders or executive boards or much structure at all. In recent days, unions have endorsed Occupy Wall Street, marched with them, and provided food, drinks, clothing, and more. But the protests remain a loosely organized, essentially leaderless effort.

Goals of the Movement

“Kill the bill! Kill the bill!” Wading among the crowd in Madison in February, you couldn’t go more than 10 minutes without that chant breaking out. It captured exactly what the protesters wanted: the death of Scott Walker’s anti-union bill. (They didn’t get it.) Later, those demands broadened to include fewer cuts to funding for education and social services by Walker and Wisconsin Republicans, but for much of the protests, it was perfectly clear what the angry cheeseheads wanted.

Occupy Wall Street so far has had no clear set of demands—and intentionally so, it seems. A post at OccupyWallSt.org demanded that supporters stop listing demands for fear of making protesters “look like extremist nut jobs.” The post went on, “You don’t speak for everyone in this.” The vague intentions have raised eyebrows, but they also have had the effect of welcoming a diverse group of supporters without alienating them. “The protesters have been eloquent in rejecting the idea that they produce ‘one demand’ and also in articulating in broad terms what they want,” says Robert Weissman, president of Public Citizen.

Like the protesters in Iran’s “Green Revolution” and Egypt’s Tahrir Square uprising, Wisconsin and Occupy Wall Street have made savvy use of social media for everything from rallying supporters and organizing marches to asking for food. Take Twitter: Both uprisings have built lively, if contentious, forums for debate with the hash tags #wiunion and #occupywallstreet. So many tweets poured in during Wednesday’s Occupy Wall Street march that it was impossible to keep up.

Other forms of online organizing have been pivotal. There are more than 230 Facebook pages promoting Occupy events from Tacoma, Washington, to Marfa, Texas, to Milwaukee, just as Facebook helped energize protesters in Wisconsin. And for those who couldn’t make it in person, livestreaming has brought supporters from around the country and the world closer to the action on the ground.

Laying Down the Law

Scott Walker’s bill exempted police officers from the most draconian crackdowns on workers’ rights. That put cops in a tight spot, because it was the job of the police to contain and, when necessary, crack down on the crowds of public workers who occupied the state Capitol rotunda and protested in the surrounding streets. But throughout the months-long protests, police arrested very few, allowed the occupiers to remain inside the Capitol for weeks, and generally treated angry demonstrators as best as could be hoped. Off-duty cops from around the state even joined the protesters in Madison.

Actions by law enforcement in Manhattan against Occupy Wall Street have at some turns been a very different story, with police crackdowns stealing the spotlight. This video of an NYPD deputy inspector using pepper spray on a handful of female protesters sparked outrage, added a streak of sensationalism to the story, and was picked up by mainstream news outlets. The arrest of more than 700 people who marched on the Brooklyn Bridge last weekend similarly made national headlines, leading to heaps of criticism and a class-action lawsuit against the NYPD.

Supporters called in pizza orders from around the world for the hearty crew of Capitol occupiers in Wisconsin. The same is happening for those camped out in Zuccotti Park, blocks from Wall Street. Pizza: It’s the nosh of choice for American uprisings in 2011.