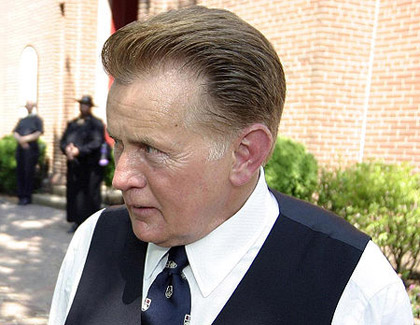 President Bartlet of The West Wing, as played by Martin Sheen.Wikimedia Commons

As Barack Obama continues to frustrate many of his most ardent supporters, liberals have found themselves casting about of late for a modern-day champion—a new FDR, or Teddy Kennedy, or—dare I say it?—Josiah Bartlet.

Quick-witted, media-savvy, and unapologetically liberal (check out his evisceration of an Ann Coulter look-alike radio show host here), The West Wing’s President Josiah (“Jed”) Bartlet provided diehards an alternate reality from the nightmare of the Bush administration. Since it first aired in 1999—wrapping up in 2006—the show has spawned a cottage industry of fan sites and message boards.

But nowhere does the spirit of The West Wing live on like Twitter, where enthusiasts role-play under the names of their favorite characters, including the chief of staff, White House counsel, Chairman of the Joint Chiefs, and even the press secretary’s goldfish. And as on screen, none holds a candle to the snark and sheer force of the POTUS character himself.

The creation of a self-described “struggling writer who was having trouble writing in character” in his late 20s, @Pres_Bartlet has racked up 23,000 followers in its 15-month, 12,000-tweet existence. Besides serving as a go-to source for timely West Wing references, @Pres_Bartlet has emerged as an internet cult figure, above all, for saying what liberals wish their real-life president would say.

Take his response to President Obama’s December 2010 deal with the GOP to extend the Bush tax cuts for the wealthy, in which the president decried Republican negotiators as hostage takers: “I’m not an expert or anything, but I’m pretty sure when someone holds people hostage and demands a jet, you don’t give them the damn jet.” That tweet caught the attention of one follower, Rachel Maddow, who cited it approvingly on her show a couple nights later.

Despite his often biting criticism of the president, the twentysomething behind the tweets—who remains anonymous to, you know, preserve the mystique—has a lot of sympathy for the Oval Office’s current occupant. When I asked him over Gchat whether his shtick was borne out of frustration with Obama, he replied, “Actually, no. I think that some of the more popular tweets have come from that feeling, but that wasn’t how it was born. Being POTUS is a hard job.”

Indeed, for the almost mythic reverence afforded President Bartlet by liberals, regular viewers will recall that his tenure bore some striking similarities to Obama’s. So enraged did Bartlet drive the left in his first term that a retiring Supreme Court Justice fumed at the president during their parting exchange on The West Wing, “I wanted a Democrat, but instead I got you.”

As for liberals’ clamoring for a replay of Bartlet’s immortalized “Then shut it down” moment (see clip below), when he refused to cave to Republican demands for further cuts in order to avert a government shutdown, @Pres_Bartlet’s ghostwriter cautioned that the analogy didn’t exactly apply to recent impasses over the budget and debt ceiling. “It’s important to remember that when [Bartlet] shut down the government, he was already in his second term.”

Fair enough. But if current polling trends hold, Obama could miss out on a second term altogether. Might a plea for advice by the president to his fictional predecessor be enough to coax this liberal lion of the Twitterverse out of anonymity?

“I think that if Obama wanted to find out who I was, he’d be able to,” came the reply. “Remember, the FBI works for him.”