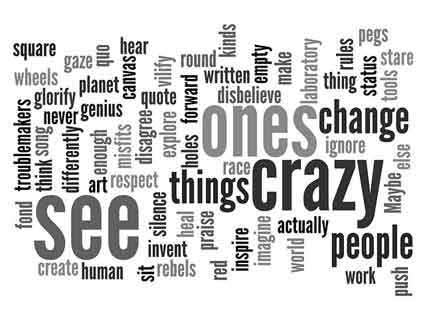 Here’s to the crazy ones. The rebels. The troublemakers. The ones who see things differently. While some may see them as the crazy ones, we see genius. Because the people who are crazy enough to think they can change the world are the ones who do.<a href="http://www.flickr.com/photos/ianaberle/4185095125/sizes/z/in/photostream/">ian</a>/Flickr

My first reaction to Occupy Wall Street was a sigh. Is the left in this country so anemic, I thought to myself, that we need a Canadian magazine to tell us to protest? It bothered me that the usual suspects—the dreadlocked, bandannaed bongo drummers—were the ones who answered the call and set up first camp in Zuccotti Park. Why couldn’t some clean-cut, American-flag wavers—folks who wouldn’t immediately, viscerally alienate mainstream America—be the ones who occupied Wall Street? Why did it have to be those people? I was angry at them; I was actually rooting for them to pack up and go home. I thought they would embarrass the left and further alienate the mainstream from the cause pragmatic progressives like me care about: getting money out of our politics and creating a more equitable society.

Explore MoJo‘s updated map of protest hot spots nationwide, and meet the creators of We Are the 99 Percent.

And then, like many pragmatic progressives, I watched them persist, I saw the unions join them, I saw nondreaded folks—and even some folks in suits—march along side them, and my attitude changed. Yesterday, I decided to attend the march from New York’s City Hall to Wall Street.

I intended to be more of an observer than joiner, but on the train ride, it was hard to keep my reporter’s hat on. I saw a group of older women, professors at the City University of New York, who were talking about the march, and I asked one of them if they were heading to Wall Street.

“We are! What about you?” she excitedly replied.

“That’s where I’m heading too.”

She turned to her colleagues and said, “Look at this guy: He looks like he works on Wall Street [I was coming from a meeting and wearing a blue blazer], but he’s coming to the march too!”

A guy with a black hoodie and a chain wallet who looked like he might be an anarchist got on at the next stop; the woman ask him if he was heading to the march, and when he replied affirmatively, she pointed at me and said, “He’s going to Wall Street too!” The guy must have thought I was going to work, because he glowered at me and said, “I hate people who work on Wall Street.” The woman replied, “No, he’s with us!” and I felt an undeniable surge of solidarity.

When I got off the train, there was a much larger crowd than I expected in front of me. But my feelings of solidarity quickly waned. As someone who’s covered—and attended—many protests, I was dismayed to see all of the things that had soured me on protest in recent years.

First, there were the far-left Fox News-bait folks, who threatened to overshadow hundreds of innocuous signs about job creation and fair taxation—and clever signs, like “Run with the People, Not the Bulls” and “I am Buffett’s Secretary”—by unfurling banners like “Marx Was Right— Destroy Capitalism,” passing out 9/11 truther fliers, or hoisting a disgusting, bloody faux-severed head of Lloyd Blankfein, as one guy did.

Second, although there were some young folks, the clear majority of protesters were Boomers, not representatives of the generation whose futures—and presents—are being screwed by our wildly imbalanced economic situation.

The third problem was the single-issue folks. There was actually something heartening about watching all of the various pockets of the left come together—it felt a little like the scene from Lord of the Rings when all of the different species converge for the epic battle against the orcs. But come on—legalize marijuana, Free Palestine, anti-fracking—how about, for once, just advocating for economic justice when you’re at a march for economic justice?

These are the heroes we marched in solidarity with? This guy is our Wael Ghonim?

Fourth, it seemed like there was one indy documentary filmmaker for every two protesters.

And finally, the Us vs. the Police theme was too predominant. The police set up barricades to control the flow of the crowd, and people shook them and chanted “Let us out! Let us out!” after only waiting for a few minutes. One woman waved a sign in a cop’s face that read: “Quick, sell everything and invest in pepper spray.” I do think there have been acts of police brutality over the past couple weeks, and I take it seriously. But demonizing cops is never a good strategy; anyone remember the Beer Summit of 2009? Indeed, one of the most impressive and inspiring strategic moves on the part of the Tahrir Square protesters—whom the Occupy Wall Street folks are attempting to emulate—was the chant “The army is with us!” Police wages, like most middle class jobs, are stagnating too; why not embrace them as part of the Other 99 Percent?

When we finally made it to Zuccotti Park, the first person I saw camping out was a stoned-looking guy with a banjo standing next to a guy holding an upside-down American flag. These are the heroes we marched in solidarity with? This guy is our Wael Ghonim?

When I got home, I heard that Steve Jobs passed away. I was much more upset about his death than I expected to be. I’m not sure why but I immediately went on YouTube and looked up the “Think Different” commercial. My younger, more radical self hated the ad for exploiting Martin Luther King Jr. to sell computers, but I was moved this time around. “Here’s to the crazy ones,” the narrator reads, “…the people who are crazy enough to think they can change the world are the ones who do.”

I thought about the drugged-out dude with the banjo: one of the crazy ones. And the dude with the upside-down flag and the one with the severed head and the anti-fracking obsessive and the people jonesing for a confrontation with the cops: all crazy ones. Crazy ones who sparked the first mass outpouring of left-wing activism in years, who have finally provided a visible counter to the free-market fanaticism of the tea party. Crazy ones who have reignited a conversation about class in America.

The pragmatic progressives like me didn’t start this movement. We thought about the long-term impact for the left and the short-term electoral optics for Democrats. When the economy collapsed, we were quiet, the tea party spoke up, and the rage the country felt was directed toward government, not Wall Street. In short, we were afraid.

Thankfully, the crazy ones weren’t.

And in spite of all I saw that I didn’t like, there were clear signs that the movement is maturing, getting more organized, coalescing around a message: “We Are the 99 Percent.” Like the protesters in Tahrir, there are clean-up crews keeping Zuccotti as spiffy as possible. Organizers are even enforcing message discipline by urging supporters on Twitter to shorten protest-related hashtags from #OccupyWallSt to #OWS.

Perhaps it’s a natural evolution, but it also seems likely that the movement is changing because the seasoned organizers and pragmatists are working alongside the radical idealists who were there from the start.

The only reason those pragmatists are there is because the crazy ones took the first steps.