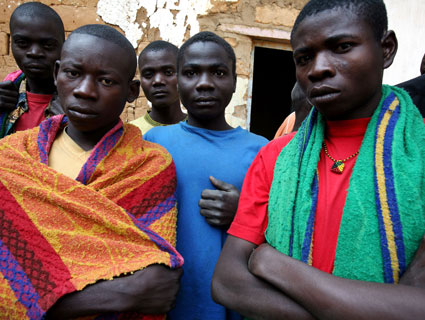 Late last year, the Obama administration quietly waived restrictions on military aid to Chad, Yemen, Sudan, and the Democratic Republic of Congo (DRC)—four countries with records of actively recruiting child soldiers. Those restrictions were a key part of 2008’s Child Soldiers Prevention Act (CSPA)—a law that was co-sponsored by then-Senator Obama—which requires that such assistance be yanked for countries that recruit soldiers under the age of 15.

The waivers angered human rights advocates, who were blindsided by the announcement. So the White House promptly deployed Samantha Power, the National Security Council’s human rights czar, to smooth things over via conference call. The Obama administration’s argument: The four offending countries hadn’t had time to comply with the law. Power also explained that the waivers would only be in effect for one year. “Our judgment was to brand them, name them, shame them, and then try to leverage assistance in a fashion to make this work,” Power said.

But as Foreign Policy’s Josh Rogin reports, the White House has given up on that plan. Instead, it chose to waive almost all of the penalties associated with the Child Soldiers Prevention Act for a second consecutive year, despite the absence of any demonstrable evidence of progress in the offending countries.

Here’s Rogin’s list of some of the reasons administration officials presented to NGO representatives on Tuesday afternoon:

[S]ince the country didn’t exist when the latest report on child soldier abuse came out, that country doesn’t fall under the law. Their reasoning is that the report in question, known as the 2011 Trafficking in Persons (TIP) report, came out June 27. South Sudan was declared independent 12 days later on July 9. They will receive $100 million in U.S. military aid this year. . . .

[C]ounterterrorism cooperation with that country is too important to suspend. Yemen is set to receive $35 million from the United States in foreign military financing. What stunned activists in the room, however, was State Department officials’ admission that they don’t know who actually controls the Yemeni military these days. . . .

[T]he administration issued a partial waiver, allowing military training but withholding about $1.3 million in foreign military financing. But while this may seem like a compromise, that military financing was also prohibited by another law, the Trafficking Victims Prevention Act.

[T]he country has made sufficient progress on eliminating child soldiers because they signed a U.N. action plan. Activists at the meeting were skeptical that the plan constituted an attempt by Chad to address the issue head on.

In the cases of South Sudan and the DRC, the White House is wiggling out of the CSPA through some pretty stupendously lame loopholes. When it comes to Chad, it’s seems like a stretch to suggest that things are ship-shape enough to let the country off the hook. With Yemen—well, at least they’re being straight up. As straight up as you can be knowing anything about who you’re dealing with, that is.

Any country even remotely close to the horn of Africa (like these distinguished four) is just too strategically important for the White House to risk burning bridges with—a point bolstered by the recent killing of Anwar al-Awlaki. So, for the time being, it’s still guns for the kids.