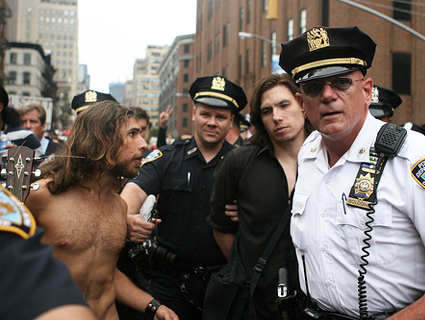 As midnight approached in New York City’s Washington Square Park on Saturday, 14 occupiers sat in the center of an empty fountain playing Woody Guthrie songs. “If you would like to remain in the park past midnight, you will be subject to arrest,” a policeman had just broadcast through a bullhorn, sending thousands who’d come for a political rally fleeing. Backed by some 100 riot cops in face shields, an exhausted-looking community affairs officer moved in to try to talk reason. “We marched with you guys; we treated you with respect,” he said, pointing out that some officers had been on duty since 3 a.m. “We understand your cause. We understand your voice. We understand what you are saying. But all we want is for you to vacate the park.”

“This is political,” said a man in black glasses, between drags on a cigarette.

“C’mon guys,” the officer pleaded. “Why get arrested?”

The New York City Police Department has dealt with a heavy dose of criticism for the way that it has handled the Occupy Wall Street protests, with an unprovoked pepper spraying, questionably legal arrests, and a dressing down by a US Marine at Times Square all caught on videotape. But in the interactions with police that I have witnessed and the conversations I’ve had with officers, a more nuanced picture has emerged: one of overworked rank-and-file cops torn between following orders and sympathizing with the movement and its goals.

“We are all in this together,” says an off-duty cop—let’s call him Jim—who described himself to me as a 99 percenter and supporter of the occupation. Jim says he believes that most of his fellow officers feel the same. “We have no problems with what goes on there,” he says.

Jim has stubble, thinning hair, and circles under his eyes. He’s been posted to Occupy Wall Street since Day One, and all the mandatory overtime is wearing him down. “I’m really working hard for this,” he says. “I’m getting yelled at, I’m getting cursed out; I’d rather be at home with my family right now.”

“We are in a union as well,” says one NYPD veteran, “and we are not rich.”

And yet he understands that the same group that’s squaring off against him at Zuccotti is fighting for his future. A 10-year NYPD veteran who helped escort people out of the Twin Towers on 9/11, Jim has seen his retirement fund cut in half by a declining stock market, from $40,000 to $20,000. He worries that his kids won’t be able to afford college or find jobs. And he’s frustrated about not being able to talk about it openly. “We’re getting lost in the shuffle,” he says, pointing out that other public-sector unions, unlike his own, have backed OWS. “We are in a union as well, and we are not rich.”

Sure, there are things at Zuccotti Park that Jim doesn’t like. The anti-war placards and all the other non-economic messages strike him as distractions. He doesn’t like the mushy demands, or the handful of occupiers who are needlessly confrontational. But every group has its bad seeds, police included, he says: Deputy Inspector Anthony Bologna, the officer in the infamous pepper spray video, is just “one guy.”

Whether Jim really represents NYPD attitudes toward Occupy Wall Street is hard to say. Of a dozen or so officers I’ve approached this week, only a few would talk to me. Some brusquely shooed me away; others politely referred me to the force’s Department of Community Affairs, explaining that they aren’t allowed to talk to the press.

A community affairs officer used the occupiers’ “people’s mic” to announce that Naomi Wolf had been released.

A cop eating a hamburger next to me late one night at a smelly, protester-packed McDonald’s told me she was wiped out but supported the movement’s goals, as did another officer I overheard chatting with a demonstrator on a crowded sidewalk. On the other hand, I barely avoided being arrested on the night of the arrests in Washington Square Park—some of the officers clearly wanted to cuff me or turn off my camera.

And it seems like every time the police are learning to get along with the occupiers, they overreact in one way or another. On Tuesday night, it was the arrest of well-known feminist author Naomi Wolf, who was hauled off in plastic zip cuffs for doing nothing more than standing on a sidewalk in an evening gown in front of a Huffington Post event in SoHo, where she—and Gov. Andrew Cuomo—were invited guests.

Angry at police for barring anti-Cuomo protesters from assembling there, Wolf occupied the sidewalk herself in solidarity. She was tossed in a police van and hauled off to a “faeces- or blood-smeared cell,” she later wrote. The protesters responded by marching on a nearby police station, the same one where I’d interviewed Jim, to demand her release.

When they got there, they found that the police had calmed down. A community affairs officer used the “people’s mic,” a method of group communication devised by the protesters, to announce that Wolf had been released. Then the occupiers asked him for a “temperature check” on whether they should go back to Zuccotti. Adopting their hand signal for “yes,” the officer held his hands up in the air and wiggled his fingers.

“I think it’s a waste of time,” says another officer. “I don’t think anything is going to change.”

Some supporters of Occupy Wall Street have worked hard to reach out to the police. On Monday, I found John de Clef Piñeiro, a former high-ranking New York Housing Authority official, standing on the steps of Zuccotti Park in a sharp pinstriped suit and holding a large sign directed at the men in blue. “Your pay, job security, and pensions are at risk, just like ours,” it said. “We are not the enemy.” Piñeiro told me he’d been to the park four times with the sign. “If I can prevent someone from getting maced in the face because the police realize they are part of the 99 percent, I have accomplished something.”

A few blocks away, near the 9/11 memorial, I found a young officer who was more on the fence about Occupy Wall Street. As far as he was concerned, protesting inequality was about as useful as protesting the bad weather. “I think it’s a waste of time,” he said. “I don’t think anything is going to change.” He quipped that the occupiers might more productively spend their time looking for jobs. But then he softened his tone. “I don’t really know what they’re all about,” he admitted with a friendly smile. “Now that you mention it, maybe I’ll go home and read up on it.”