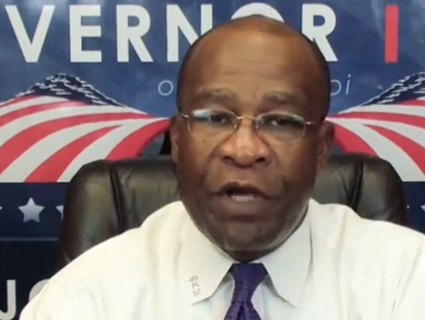 The New York Times has a story on something we’ve written about a bit before—the push to pass state-level constitutional “personhood” amendments to ban abortion (among other things) by defining life as beginning at conception. Previous initiatives have fallen short, but Mississippi’s personhood movement, which was initiated by a one-time Christian secessionist who backed a plan to create an independent theocracy in upstate South Carolina, has a decent chance of passing this November—at least if its high-profile endorsers are any indication:

Mississippi will also elect a new governor on Nov. 8. The Republican candidate, Lt. Gov. Phil Bryant, is co-chairman of Yes on 26 and his campaign distributes bumper stickers for the initiative. The Democratic candidate, Johnny DuPree, the mayor of Hattiesburg and the state’s first black major-party candidate for governor in modern times, says he will vote for it though he is worried about its impact on medical care and contraception.

Yes, the Democratic gubernatorial nominee supports the measure, which would ban abortion even in cases of rape. DuPree fleshed out his views a bit at a debate at the Mississippi College School of Law:

If you missed that: DuPree says he also has concerns about exceptions for things like rape and incest, but thought of the ballot question as one of principle: Where do you believe life begins? But he really should have concerns about rape and incest, because the group Personhood Mississippi, which collected the signatures to put the question on the ballot, campaigned for the measure by holding something literally called the “Conceived in Rape Tour.” Brad Prewitt, spokesman for Yes on 26, told me, “you don’t execute the product of the crime, and that’s what abortion does.” Prewitt also referred to the morning-after pill as a “human pesticide” and explained that while he supports in-vitro fertilization, the amendment would require changes in the way IVF is currently handled. (For one thing, if you froze an embryo, that could be redefined as child abuse.)

There are lots of different ways to try to ban abortion on the state level. You can defund Planned Parenthood. Or you can pass a bunch of absurd regulations forcing clinics to widen the width of their hallways and things like that. You can file lawsuits declaring clinics a “public nuisance.” You can require three-day waiting periods and make the process as cumbersome as possible. You can work to block insurance providers from covering abortions. You can make it legal to kill abortion providers (or at least try). Oh, the places you can go.

If DuPree has any concerns about medical care and contraception and exceptions for rape before it becomes law—which sound like they should be really huge sticking points—maybe that’s a sign he should pursue some other strategy to reduce abortions in Mississippi. He certainly wouldn’t be the only one: National Right to Life counsel James Bopp opposes the measure, as does the notoriously lefty Eagle Forum.

Cristen Hemmins, an anti-26 activist and survivor of a brutal carjacking, rape and shooting, told me she’d gotten a call from Dupree after repeatedly contacting his office. Dupree reiterated that he opposes abortion but thought there should be some provisions for rape and incest victims. Moreover, he said, his daughter had had an ectopic pregnancy and eventually had a child through IVF, both situations potentially impacted by Personhood.

“I said, ‘I don’t understand, if you’re for all these things … why are you voting yes?'” Hemmins recalled. “[Dupree] said, ‘I’m starting to see that there are issues … I’ve said I’m going to vote yes and it’s too late to go back on it now. It’d destroy me politically.'”

So it’s likely that DuPree will publicly support the measure and then…just not vote for it. Not sure that’s a winning platform.