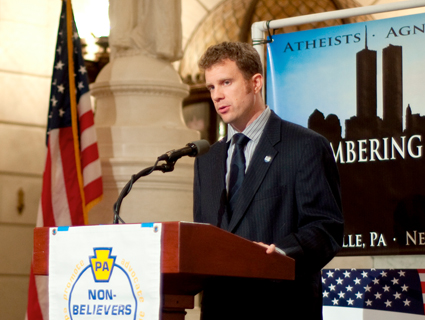 On Wednesday, when the Army holds its 12th-annual Diversity Leadership Conference at West Point, gays and lesbians will be well represented for the first time. But so will another disparaged military minority: self-identified atheists and freethinkers in uniform, as many as 40,000 of them. In an unorthodox move, the academy has invited Jason Torpy, an Iraq vet and president of the Military Association of Atheists and Freethinkers, to plead the case for—among other things—adding atheist chaplains to the armed forces.

Huh? Isn’t “atheist chaplain” a contradiction in terms? Not at all, Torpy says. In an interview with Mother Jones, he explained how the military’s chaplain corps in fact performs mostly secular counseling and community services for the troops—while still eschewing gays, lesbians, atheists, and religious skeptics, denying them the same means to mental well-being that most Christians, Jews, and Muslims can find in the ranks. The big problem, Torpy points out, is that the services’ chaplains aren’t representative of their flocks: Conservative evangelical clergy dominate the ranks, in numbers way out of proportion to those among servicemembers (see the chart below.)

With Don’t Ask, Don’t Tell behind us, does mainstream acceptance for atheists—”self-guided weapons,” as some might call them—represent the next big cultural battle in the military? Torpy spoke about his mission, from a gay-atheist alliance to what can be learned from the famously nonbelieving war hero Pat Tillman.

Mother Jones: So, have you ever been in a foxhole?

Jason Torpy: Yes, I have. [Laughs.] There are not a lot of foxholes in Iraq these days, but they are there.

MJ: What does the Military Association of Atheists and Freethinkers (MAAF) do?

JT: We provide outreach and support to atheists in the military. We help to affirm individuals in their personal identity. We grow our personal values, character, and integrity, and we connect them with a community of like-minded individuals. These are things that [military] chaplains do for everybody, you know, except us. So we’re filling in the blanks. And helping the chaplains do it better.

MJ: How many military atheists are there?

JT: There are more self-identified atheists than Jews, Hindus, Buddhists, and open Muslims. So that’s only about 10,000 by some estimates, maybe 30 or 40,000 by other estimates. It sounds insignificant, but it’s actually more than everybody but the Christians.

MJ: A lot of Mother Jones readers could be forgiven for wondering why a government department has its own clergy corps in the first place, much less why atheists are interested in working with those clerics. But you go further: You advocate the inclusion of atheist chaplains in the military.

JT: My view is that chaplains haven’t embraced their new role in the modern chaplaincy to provide for every servicemember. The biggest shortfall here is actual training in the chaplains’ school on the nontheist perspective—atheism and humanism—from us, not from chaplains who don’t understand us.

We’ve got a considered opinion that chaplains are appropriate, given the modern chaplaincy. The military has heaped upon the chaplains responsibilities for ethical advisement, for well-rounding the person, to provide support to a military that is less than 70 percent Christian and less than 50 percent Protestant, to provide support to a unit and still be relevant. Chaplains are given responsibility for deployment counseling, for family counseling, financial counseling, and now this new resiliency training. They’re given these responsibilities, but they haven’t gotten away from their history as a purely clergy organization that does church on Sundays. 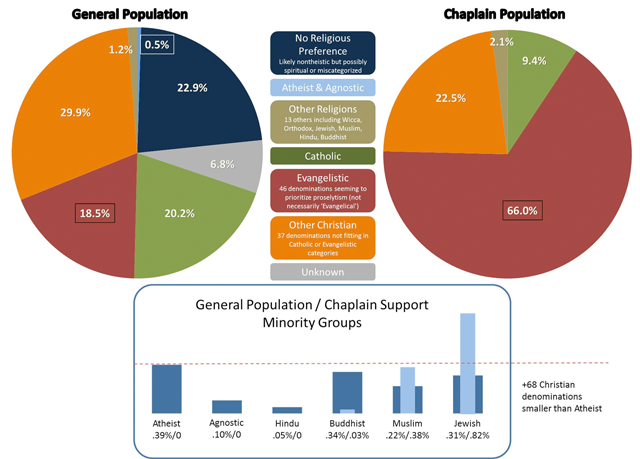 Religious breakdown of US servicemembers, versus the faiths of their chaplains.
Click on the graphic for a larger version.Courtesy militaryatheists.org

MJ: How much flack are atheists subjected to by their believing counterparts in the military—superiors, chaplains, roommates?

JT: It’s really all over the board. The biggest issue we have is the lack of support from the chaplains. A lot of our members all around the world are going in [to base religious centers] and saying: “Hey, you know, we’d like a place to meet. We’d like you to help us connect with others like us. We’d like to have some information.” You know, just like they do for everyone else. You know, you’ve got Christian concerts, you’ve got Christian Bibles, you’ve got lists of services if you’re Jewish, if you’re Hindu, if you’re Muslim. The chaplain’s a one-stop shop. They’ll affirm your identity, help you grow in your personal values, connect you with a community of like-minded individuals. That’s what the chaplains do. But they’re not doing it for us.

MJ: One of the most prominent military humanists has to be Pat Tillman, the NFL star turned Afghanistan hero whose death by friendly fire was the subject of a government cover-up. But his religious convictions, or his lack of them, seems under-reported.

JT: Pat Tillman was a hero and an inspiration to the nation. It’s unfortunate that there’s a certain type of hero worship that goes on, where we decide that a person is good and start heaping extra good qualities on him. That sort of hero worship was attempted to be put on Pat Tillman a little bit. But in all the 9/11 anniversary retrospectives, Pat Tillman wasn’t brought up a lot. I think people realized that he’s not their perfect Christian warrior. He was an atheist. You know, he was one of us. We revere and respect Pat Tillman very much. But the family has not reached out to the movement, and we want to respect them.

That having been said, we plan to name one of our new donor societies after Pat Tillman, based on his example, showing secular values, secular commitment, secular patriotism, and his own status as a great scholar-warrior.

MJ: How receptive has the brass been to your message?

JT: The military leadership—I’ve been in to see all the chief chaplains of all the services, I’ve been in to see the Department of Defense and a few levels down—they’re not going out on record to say, “Atheists and humanists deserve support as well, they can be chaplains. Their material can be in the chaplain office.” They’re not saying no. They’re not saying yes, either. They’re not doing what they need to do to make sure they have an understanding of personnel. The fact that there’s a Christian concert, that’s problematic on constitutional grounds, but I’m far more worried about the lack of outreach altogether: the lack of understanding, lack of training and support for atheists and humanists. That’s what’s causing the damage.

MJ: But even if the role of the chaplains has grown more secular, figures show that dominionist conservative evangelical Christians dominate the military clerical ranks more than they used to. Is tolerance of humanism really in the cards here?

“The chaplains are having to change a lot, and deal with a lot of new ideas and issues based on gay rights.”

JT: I’d like to recognize that the chaplaincy does have Hindu, Muslim, Jewish, Buddhist, and Christian chaplains. But we also have to recognize that 66 percent are from that evangelical kind of Great Commission organization. And that was a concern that I had, that those would be political Christians. I don’t mind evangelical Christianity; that’s not really an issue, unless it’s in a political manner that wants to take advantage of the military in order to do that evangelism. What we find in the military is concerts and Bibles and advertising and messaging and priorities and funding, all towards that area. The question for me is: Where are those humanist chaplain candidates? I’d like to put those candidates forward.

MJ: When a soldier deploying to one of the war zones lands at the halfway point—Ali Al Salem Air Base in Kuwait—he or she is bombarded by parting gifts from chaplains: Bibles, Jewish and Muslim prayer books, even crosses and Stars of David to wear on their dog tags. What do the atheists get?

JT: Members of the MAAF have to opportunity to sign up to receive care packages, and we’ll send them out wherever they are around the world. Right now, we’re sending out about 25 a month. We have two brochures—we have one that talks about the organization, so they have somebody that can support them, an international network that they can plug into. We also have another one specifically for chaplains, called “Living Well Through Secular Humanism,” that’s about providing support, comfort, and information to an atheist or humanist in the military, so the chaplains can do their job better.

MJ: Has the end of DADT affected the cause of nontheists and freethinkers? They, too, will still have trouble getting solace from most military chaplains. Is there a sense that this is the next battlefront?

JT: Well, I think it is the next frontier. The good news is, among atheists and humanists, almost to a person, it’s not possible to have a problem with homosexuals. And so we find a very close affinity to the gay rights movement. The difference, though, is that you can’t convert people to gay. You can convert people to atheist. And I think that worries a lot of people, even if we’re not trying to do that. You know, there’s plenty of us out there that we’re trying to connect with, and that’s what’s important.

The chaplains are having to change a lot, and deal with a lot of new ideas and issues based on gay rights. All of this sensitivity to change, and anger about having to tolerate and respect other servicemembers, they’re at their limit. So as we come forward and say, “Hey, we’d like respect as well,” it’s a little bit of a double-edged sword. They already did that change, and they don’t want to change any more than they already have.