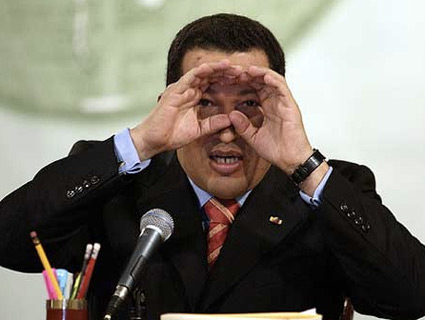 In a moment that Sean Hannity couldn’t have scripted better himself, #OccupyWallStreet just found itself a new ally: Hugo Chavez. Venezuela’s leftist leader threw his support behind the protesters during a televised palace meeting on Saturday, denouncing the “horrible repression” of the American people. #OWS has picked up praise and appearances from other controversial figures like demagogue Louis Farrakhan, professional alienator Michael Moore, and, uh… that Kanye West guy. But this is the first instance of a foreign strongman going to bat for the fledgling movement. Chavez also made sure to toss in a brief jab at President Obama’s policy fumbles, Reuters reports:

“This movement of popular outrage is expanding to 10 cities and the repression is horrible, I don’t know how many are in prison now,” Chavez said in comments at a political meeting in his Caracas presidential palace shown on state TV…“Poverty’s growing, the misery is getting worse,” he said, referring to the causes of the U.S. protests. “But that empire is still there, still a threat … [President Barack] Obama is on his way down, for lots of reasons. He was a big fraud.”

In his long, thuggish political career, Chavez has successfully cast himself as a populist, anti-imperialist crusader battling the purveyors of “savage capitalism“; so it’s no huge shock that the Venezuelan president would jump at a chance to further highlight the consequences of capitalist excess. It’s no shock, either, that the right-wing commentariat are giddily starting to seize the chance to tie #OWS protesters to the socialist authoritarian.

Obviously, Chavez’s statement doesn’t actually say anything about #Occupy Wall Street, as much as pundits on the right would like it to. Trying to discredit the entire protest movement as communist infiltration based on the comments of one Latin American head of state is almost like saying Nelson Mandela got it wrong because he palled around with Fidel Castro.

Given the fiercely anti-Wall Street nature of the protests, levelheaded progressive supporters would be foolish not to expect more unwanted endorsement from less-than-savory fellow travellers on the left. But as MoJo’s Kevin Drum noted in a recent post, advocates of #OWS should learn to do what conservatives do when linked to extremists in the Tea Party: ignore, ignore, ignore:

If you go to any tea party event, you’ll hear some crackpot stuff and see some people dressed up in crackpot costumes (tricorner hats etc.)…But does this scare off anyone on the right? It does not. They ignore it, or dismiss it, or try to explain it away, and then continue praising the overall movement…They know whose side they’re on…[L]iberals need to take the same attitude. Are there some crackpots at the Occupy Wall Street protests who will be gleefully quoted by Fox News? Sure. Are some of the organizers anarchists or socialists or whatnot? Sure…But so what. Ignore it. Dismiss it. Explain it away…But don’t let any of this scare you off.