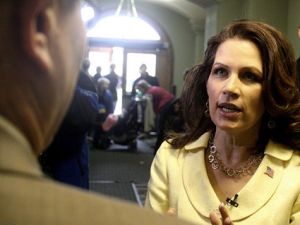 The display tables at the Values Voters Summit in Washington, DC, are a cornucopia of conservative red meat. One advertises an upcoming conference on creeping Islamic Shariah law (November 11th in Nashville; register online). Near the entrance, a company advertises something called the “Timothy Plan,” which helps investors avoid stocks that are “involved in practices contrary to Judeo-Christian principles” (the list includes Disney, CBS, and JP Morgan).

And over near the back doors, there’s PFOX (short for Parents and Friends of Ex-Gays and Gays), an organization dedicated to combating perceived prejudice against people who say they’ve stopped being gay. As the group’s literature puts it, “without PFOX, ex-gays would have no voice in a hostile environment.” Ex-gays have long been a staple on the religious right and at gatherings like this, but the organization has found a renewed sense of purpose following last spring’s to-do over Rep. Michele Bachmann’s Christian therapy clinic. As The Nation first reported, clinics owned by the Minnesota congresswoman and her husband have practiced so-called reparative therapy, designed to cure patients of their homosexuality.

At Values Voters, PFOX has gone on the offensive against the ex-gay movement’s bad press. They feature an open letter from PFOX leader Greg Quinlan, defending Bachmann & Associates and taking on its critics: “They cannot bear to have even one homosexual leave homosexuality, hence their outrage at Dr. Bachmann,” Quinlan writes.

Although anti-bullying initiatives in Minnesota have been challenged by social conservative groups (who say it provides gay kids with special rights and encourages an unholy lifestyle), PFOX wants to make clear that it opposes bullying in schools—for dramatically different reasons. Among the reasons why Christians should oppose school bullying, according to PFOX’s literature: It might turn you gay. “The teasing of others who called me derogatory names such as ‘fag,’ ‘queer,’ and ‘dyke’ caused me to begin believing the lies they were telling me,” reads one testimonial in the organization’s “Safe Schools for Everyone” brochure.

“The bottom line is ex-gays do exist, and they deserve as many rights as any other sexual orientation,” Quinlan told me. When I asked Quinlan what rights ex-gays were currently being deprived of, he pointed to the fact that they’re currently not included in any government materials on sexual orientation. But wouldn’t an ex-gay person still be protected as a heterosexual? Well, yes. But the point, they explained, was that without formal recognition, ex-gays are more susceptible to being pushed around by real bullies—like Human Rights Watch. (PFOX has previously accused the organizers of the Day of Silence—which raises awareness of anti-gay bigotry—of “intolerance of ex-homosexuals.”)