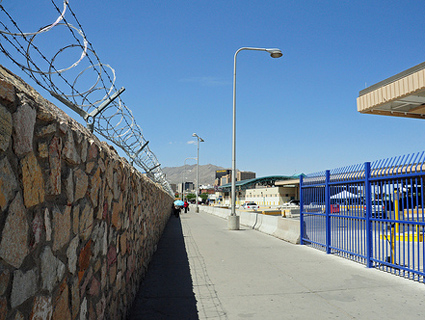 Texas Gov. Rick Perry and fellow Republican presidential candidate Mitt Romney sparred last weekend over Perry’s suggestion that the threat of Mexican drug violence spilling into the United States “may require our military in Mexico…to kill these drug cartels and to keep them off of our border and to destroy their networks.” Liberals mocked Perry’s comments, and on Thursday, a border town judge chided both candidates in a New York Times op-ed for their “quasi-military approach [that] ignores the need for real solutions to our economic and social challenges.”

In her piece, El Paso County Judge Veronica Escobar claims that Perry’s border hawk posturing—for instance, saying President Obama was either poorly informed or “an abject liar” for claiming in a spring speech that El Paso and other border cities had become safer on his watch—could actually end up hurting places like El Paso. According to a July report in USA Today, the border city has recently “seen sharp declines in violent crimes despite being in the shadow of Ciudad Juárez, one of the main battlegrounds of Mexico’s drug wars where 3,400 people were murdered last year.” Writes Escobar, a Democrat: “Claims about our supposedly dangerous border would be laughable if they didn’t damage our image and our ability to recruit talent, investment and events.”

Mr. Perry is far from alone. Many Republican politicians—and not a few Democrats, too—use the bogeyman of border violence to justify exorbitant security measures, like the ever-lengthening border fence that costs $2.8 million per mile (for a total of $6.5 billion, including maintenance, over the 20-year lifetime of the fence). Mr. Perry’s brainchild, security cameras, have so far cost $4 million to put in place and maintain.

These measures do little besides waste money. Tunnels already run below the border fence. During their first two years in operation, Mr. Perry’s cameras led to the arrest of a whopping 26 people—that’s $154,000 per arrest. And once undocumented immigrants are apprehended, costs continue to mount: in this fiscal year alone, the federal government is budgeting $2 billion just for detention.

Those facts haven’t stopped the likes of Romney and “every mile, every yard, every foot, every inch” Michele Bachmann from talking up the idea of a fence running the entire length of southern border. Still, as unlikely (and unmanageable) as it seems, don’t look now: The Secure Border Act of 2011—which would require the Department of Homeland Security to gain “operational control” of US borders within five years—just recently made its way through the House Homeland Security Committee.