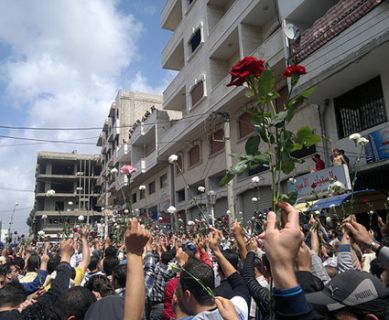 UPDATE: The State Department is investigating the use of Blue Coat technology in Syria.

UPDATE 2: Blue Coat has admitted that its technology was used in Syria.

As the autocratic regime in Syria brutally cracks down on a pro-democracy opposition, it is using technology developed by an American company, Blue Coat Systems, to suppress dissent and block access to the internet, tech experts say.

Two weeks ago, Telecomix, a tech activist group, released information from the Syrian government-run Syria Telecommunications Establishment. The release revealed gigabytes of electronic records, called log files, dating back to late July and early August of this year, and the material indicates that Syria’s government is using Blue Coat’s devices to prevent its citizens from accessing social media, video-sharing, and other websites. By using the devices, the Syrian regime can block information about its abuses from getting out of the country and monitor web activity. (Peter Fein, a hacktivist with Telecomix, says the information came from “publicly accessible, completely unsecured servers which were found using traditional network scans.”) Selling most US-manufactured goods to Syria has been forbidden by US law since 2004.

Jacob Appelbaum, a tech expert and computer science researcher at the University of Washington who was dubbed “The Most Dangerous Man in Cyberspace” by Rolling Stone, said in an email that “the log files are direct evidence” that Syria is utilizing Blue Coat’s technology. “Every IP address in all of the information released is registered in Syria,” Appelbaum added. “Every IP address routes from Syria or from known Syrian equipment with the expected latency of machines run in Syria.” Appelbaum believes that the Syrian government uses Blue Coat’s device to monitor citizens’ internet activity, record it for future reference, and then take action against dissidents. “That is to say that it’s a super policeman with a general warrant who spies on every person, records everything about that person and their activities and then it acts as the judge, jury and executioner,” he wrote.

The sample log file above clearly states that a Blue Coat device is being used. (You can view the rest of the log files here.)

A Blue Coat spokesman says Blue Coat had not sold its products to Syria.

Blue Coat technology has been used for at least a year by other nondemocratic regimes, including Bahrain, Qatar, and the UAE, according to the Wall Street Journal. Other foreign regimes use western technology to block internet access; for years now, companies like Netsweeper (based in Canada) have sold software to countries like the UAE and Yemen. Other Middle Eastern countries—including Kuwait, Oman, Qatar, and Saudi Arabia—also use western-developed filtering technology. China reportedly uses technology from the American-based Cisco to power its filter, which is referred to as the “Great Firewall” for its ability to block websites.

But none of those other countries is subject to the harsh sanctions the US has leveled against Syria.

It is against the law for US-based companies to export “most goods containing more than 10 percent US-manufactured component parts to Syria,” according to the US embassy there. George A. Lopez, a professor of peace studies at Notre Dame University and an expert on sanctions, said in an email that any direct sale to Syria would be in violation of US law. But if Syria acquired the technology through an intermediary, Blue Coat is legally protected—provided that their direct sales of the technology were accompanied by end-user agreements prohibiting any resale to Syria. “Blue Coat has no legal liability beyond their original sale providing they acquired this and can produce it,” Lopez said. Blue Coat says it does not permit its customers to sell to embargoed countries.

Companies that sell their internet-filtering technologies to repressive regimes “are playing a role in the national politics of the dictatorship countries where their products are being used,” Helmi Noman, an internet censorship expert at the University of Toronto, said in an email. “They are in fact taking sides against citizens and activists who are prevented from accessing and disseminating content and arrested and tortured thanks in part to the Western-built technologies.”

Unfortunately, Chinese companies like Huawei would eagerly fill the void should Western companies cease to provide dictatorships with such technology, argues Jillian York, the director for international freedom of expression at the Electronic Frontier Foundation. “It’s really a tough situation for all,” she says.

Regardless of the technology the Syrian government is using to restrict internet access, the situation in the country is dire: The opposition reports that Assad’s forces have killed 4,000 people. Two weeks ago, the UN attempted to “threaten” sanctions against Syria, but vetoes from Russia and China squashed the measure.