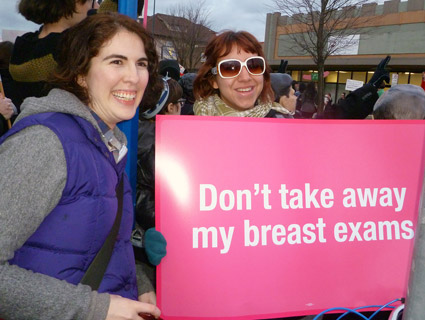 It’s 10 a.m., about an hour after the Falls Church, Virginia, office of Planned Parenthood opens for the day. As I enter, a young couple is waiting for the nurse practitioner. There’s a small television in the corner showing morning talk shows, with a large basket of condoms balanced atop. Brochures on STI testing, emergency contraception, breast self-exams, and HPV are about in abundance. It’s not that much different from any other doctor’s office you’ve ever visited, with dated copies of People and fluorescent lighting.

Last year, 3,900 patients visited the Falls Church office. Eight hundred and seventy-five of them were tested for HIV, 633 took a pregnancy test, and 743 had a pap smear. More than 600 women came in for the morning-after pill. The office dispensed 1,699 prescriptions for the birth control pill, and another 917 prescriptions for contraceptive rings. The vast majority of the women and men who come to the Falls Church clinic come for health screenings and family planning services, but another 900 visited for abortion services—a fact that has put the clinic’s future in peril.

New regulations that require abortion providers to comply with building codes designed for hospitals could force this Planned Parenthood health center to shut its doors as soon as next year. Unveiled in August and approved by the Virginia Board of Health last week, the rules would likely be impossible to meet within the space that Planned Parenthood currently rents on the third floor of a nondescript, brown-brick office building about 10 miles from downtown Washington, DC.

To comply with the regulations, the Falls Church office would have to nearly double the width of its hallways, to five feet wide. Its pre-op rooms would have to measure at least 80 square feet, and operating rooms 250 square feet. The new rules dictate the type of HVAC system the office needs to have, the number of parking spaces, and where the bathrooms should be located.

All of the state’s 23 clinics that provide abortion services may fall short of at least some of the new requirements, but the Falls Church office is almost certain to fail, says Laura Meyers, president of Planned Parenthood of Metropolitan Washington, at least in its current set-up. The office is small, at just 3,300 square feet, and Planned Parenthood rents it from the building owner, which would make a major overhaul difficult, to say the least.

Meyers and I sat in the recovery room on the morning we talked, on the green and pink padded vinyl chairs where women usually wait for a half an hour after their procedure, before they head home or back to work, whatever may lay ahead of them that day. On each chair was a white blanket and a heating pad with a floral-patterned cover. A basket of saltines and graham crackers sat beside the chairs.

“First trimester surgical abortion is among the safest procedures one can undergo in one’s lifetime,” Meyers said, “with far fewer complications than other common in-office procedures.” But the new rules single abortion providers out from all other outpatient medical services, like vasectomies or colonoscopies, many of which actually have much higher risks.

“My neighborhood in northwest DC now has a walk-in Botox clinic,” the clinic’s nurse practitioner points out in passing, noting that it’s offered by a “cosmetic consultant” rather than an actual licensed medical doctor. “Like I’m going to let him put a nerve poison in my wrinkles.”

Of course, it’s the abortions that take place here that the state is targeting with its new law, but closing the clinic would also jettison all the low- to no-cost pregnancy tests, cancer screenings, birth control, and STI tests that are the reason most people find themselves in the office. And if it is forced to close, Meyers said, “the ancillary effect of this is that people will not have access to health care.”

“Who is going to absorb all those people?” she asked.

Abortion is already more restricted in Virginia than in many other states. Most facilities only provide the procedure in the first trimester—up to 14 weeks after conception. Most counties in the state have no abortion providers at all. Virginia law also mandates a 24-hour waiting period before a woman can undergo the procedure.

Even clinics that expect to meet the new building codes will likely need to make significant changes to their buildings. The Richmond Planned Parenthood built an entirely new facility northwest of downtown in 2009, constructing it under the same standards as an outpatient surgical center out of concern that the state would issue regulations like those released last month (the Legislature had made numerous previous attempts). Even with this new facility, the architectural changes mandated under the new rules are expected to cost the clinic between $200,000 and $900,000, said Paulette McElwain, the CEO of Richmond’s Planned Parenthood. She noted that the new rules will force them to relocate one of their bathrooms—which their architect expects will cost Planned Parenthood $90,000.

More worrisome for the Richmond office, though, is that the new regulations may force other private clinics in the region to close. There are only two other clinics in the state capitol, and the three clinics combined perform 5,500 abortions in the average year. Trying to provide all the abortion services for the region would certainly strain their resources, says McElwain. That would put limit Planned Parenthood’s ability to care for the 12,000 patients who come to their office each year for health screenings and routine gynecological exams, she said.

The rules were issued in response to a law that the Legislature passed back in February that reclassified abortion clinics and called for regulations tailored to clinics. For years, anti-choice lawmakers in Virginia have been trying to pass similar bills, also known as “targeted regulation of abortion providers” or TRAP laws. (Their counterparts in Indiana, Kansas, South Carolina, and Utah succeeded.) But this year, they were newly empowered with stronger majorities in both chambers of the Legislature. They’ve also got the help of staunchly anti-abortion Gov. Bob McDonnell and Attorney General Ken Cuccinelli in the statehouse. The state Board of Health approved draft rules at a September 15 meeting, sending them to McDonnell for approval—which he’s expected to give, given his staunch anti-abortion record. The board will then have to draft the permanent regulations, a process expected to take 12 to 18 months.

Meyers said Planned Parenthood is currently evaluating its options to determine if it’s at all feasible to make changes to the current Falls Church office, or if it will need to search for a new office entirely. “Obviously, in its present form, it will not meet those regulations,” she said.