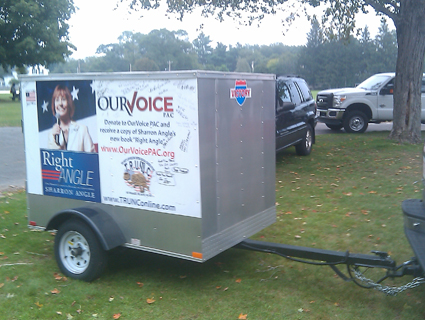 Among the folks I didn’t expect to meet in Concord, New Hampshire this weekend? Former Nevada Senate candidate Sharron Angle, last seen falling flat in her campaign against Democratic Senate Majority Leader Harry Reid—a race Republicans almost certainly would have won had the party nominated anyone but Angle.

Angle has been traveling the country this summer with the Tea Party Express, the organization that put together Sunday’s rally. She’s not riding on the bus, though; she’s been following the group’s tour bus across the country, from Napa to New England, in a retrofitted SUV-and-trailer she calls “The Team Hobbit Express.” The sides of the vehicle are plastered with messages from supporters, Graceland style, urging Angle to give it another go against Reid. The name was inspired by the Wall Street Journal‘s assertion, parroted by Sen. John McCain, that tea partiers are battling Obama like they’re hobbits facing off against Sauron (this is, apparently, a bad thing.) “The hobbits are the heroes of the story and they win,” Angle told me. “We’re taking a winning vehicle to Tampa Bay, Florida.”

Angle was hawking copies of her new memoir, Right Angle, along with lapel pins ($5) and bumper stickers, in the hopes of building up support for her political action committee, Our Voice. “As soon as I get my PAC up and running, then I can turn it over and then I can run,” she told a supporter who approached her to tell her he had donated anonymously to her campaign. (Our Voice is a super PAC, which means it can accept unlimited contributions; it can finance independent expenditures but cannot coordinate with any specific candidate—although you would expect Sharron Angle’s super PAC to be generally pretty supportive of whatever she does.)

I asked Angle whether she had any regrets about the way her campaign turned out (and the way she ran it): “Not enough to mention. We ran a good campaign. There were things that happened within that race that we’re investigating, as far as the mischief. We do have a challenge in the Department of Justice to look into the mischief that happened in that election. And that is one of the goals of the PAC, to make sure we have election integrity.” Was she alleging voter fraud? “No allegations. No allegations. Just know that there was mischief there, and we have a challenge in the Department of Justice.” So what did she mean by “mischief”? “Anomalies, things that shouldn’t have happened in a free election.”

This is nothing new from Angle, who has been warning that Reid was flouting the law even before the polls closed, and whose former PAC, We the People Nevada, had contributed to anti-voter fraud groups. A week before the election, Angle warned in a fundraising email that “EVERYTHING we have worked for in the last year could be destroyed by dirty tricks and criminal acts in the next 8 days,” citing a report that Reid offered supporters free food at his events. The DOJ complaint she mentions specifically concerns allegations that employees at Harrah’s Las Vegas casino were pressured by their superiors, and the Reid campaign, to vote for the senator. Per the complaint:

The scheme involves management and union leaders making clear that employees/members should be voting for Harry Reid, management pressures employees and supervisors to follow up on specific employees with respect to their voting, unions pay for buses for employees to be transported to the polls and union leaders go with them and disembark the buses and hover along the entrances and exits and within the polling locations watching the employees vote. That is intimidation if ever there was any!

Harry Reid did not actually steal the 2010 election; the largest contributor to Angle’s demise was likely Angle and her amateurish campaign, whose organizers famously left their posts while the polls were still open to begin preparing for her victory rally. But her refusal to let go fits into the larger conservative narrative, in the face of all evidence to the contrary, that Democrats have been and will continue to steal elections they have no business winning, until Republicans can pass a series of laws to make it harder to vote. As Ari Berman explains, laws like these tend to affect immigrants and minorities the most—incidentally, the groups most responsible for pushing Reid over the top. That’s not because Mexican-Americans all voted multiple times; more likely, it’s because they really didn’t like being depicted in Angle’s campaign ads as a bunch of violent criminals.