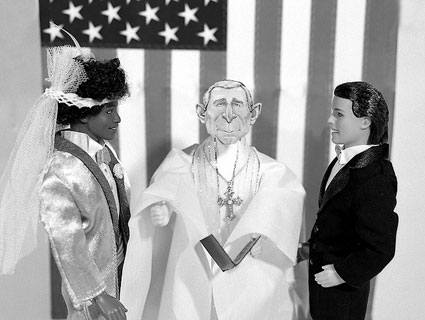 Last Spring Maryland was poised to extend marriage rights to gays and lesbians before state Democrats withdrew the bill over fears that it would not pass.

One of the dramatic developments in the fight over the law came when one of the bill’s co-sponsors, Prince George’s Delegate Tiffany Alston, decided she couldn’t support it.

Alston first missed the committee vote, then voted against her own bill when she got the chance. At the time, she explained her decision with quite a bit of anxious handwringing:

“I had no idea what to do,” said Alston (D-Prince George’s). “I feel really strongly that people who love each other should be able to get married, no matter what their gender. But I also realize that that’s not my function here. I’m here to represent the 110,000 people back home, many of whom had called and e-mailed and said, ‘We don’t want that bill.’

So the freshman lawmaker took a respite, in the form of a 15-minute ride around the picturesque State House with her chief of staff and longtime best friend, Nefetari Smith, and another state delegate, Jill P. Carter (D-Baltimore), who was also holding out. The break helped her come to terms with her conflict, and she returned to her office determined to vote no, as her constituents had demanded. The problem was that by the time she returned, the voting session had been postponed and the halls of the House were abuzz.

This is not a bad example of why fundamental rights shouldn’t be subject to a popularity contest, although Alston’s troubles with marriage weren’t over. Last week she was indicted for theft after allegedly misappropriating campaign funds to…pay for her wedding.

Prosecutors say Alston, a Prince George’s County Democrat who took office in January and then played a focal role in the General Assembly’s debate over gay marriage, issued two campaign account checks totaling $3,560 to cover her wedding expenses last year. She also used her campaign account to make payments of $660 to a law firm employee, and also withdrew $1,250 in cash for personal use last December, prosecutors say. The checks for her wedding expenses were returned to the bank for insufficient funds.

Having trouble paying for a wedding is the kind of problem I’m sure many of Alston’s gay constituents would have been happy to have. Of course, thanks to Alston and others, they can’t get married at all.