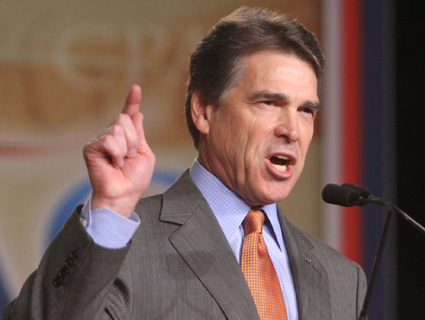 On the campaign trail, Texas Gov. Rick Perry decries the invasive and profligate ways of big government. Yet in Texas he oversaw the creation of a massive, federally funded intelligence database that hoovers up everything from driver’s license information to victims’ statements to bogus leads that may be falsely incriminating. The system, known as the Texas Data Exchange (TDEx), has drawn the concern of civil liberties advocates, not least because of Perry’s aggressive efforts to consolidate control of this sweeping intelligence vault within his own office.

In late 2005, Perry began directing his homeland security office to set up the database. Lawmakers and privacy advocates soon grew anxious over a host of problems plaguing the system. Early versions kept no record of what a particular user did when he was in the system, says Rebecca Bernhardt, the former policy director of ACLU Texas, who was part of a team pursuing reform of TDEx. “You don’t want anybody…to have unsupervised ability to go into TDEx, change names, take things out, put fake things in, and not have an audit trail of who made those changes,” she explains.

Legal watchdogs in Texas, including Scott Henson, who writes a blog following criminal justice issues in Texas called Grits for Breakfast, say that Perry put the system in place chiefly to take advantage of money from the federal Department of Homeland Security. Texas has received at least $1.7 billion in federal Homeland Security grants since 9/11 as part of the US government’s overall $31 billion investment in state and local law enforcement.

Perry wanted TDEx to be managed by the Texas Department of Information Resources, which is housed in the governor’s office. But for the database to receive Homeland Security funds, federal laws stipulated that it be run by an official law enforcement agency. So, as the Texas Observer reported in 2007, Steve McCraw, Perry’s homeland security chief, simply designated the DIR office as an official law enforcement body.

Perry’s end run sparked outrage in the Texas Legislature. At the start of the 2006-07 legislative session, a bipartisan group of lawmakers, joined by the ACLU, sought to force Perry to hand over control of TDEx to the Texas Department of Public Safety. Democratic state Rep. Jessica Farrar was a key figure in the fight to reign in control of TDEx. The homeland security office, she says, “was a political office…We have a statewide law enforcement agency, and that’s where [TDEx] should’ve naturally gone.” (Perry’s office did not respond to a request for comment.)

In October of 2007, Perry relented, signing over control of TDEx to the state’s Department of Public Safety. But in July 2009, he installed McCraw as the head of DPS. “They bumped everybody out of the way, people retired, and they made him head of DPS,” says a high-level official involved in the push to reform TDEx. The official says many lawmakers and reform advocates viewed McCraw’s promotion as yet another attempt by Perry to maintain control of TDEx.

To date, it remains unclear how effective the database (which received $33 million in DPS funding in 2009) has actually been. Of Texas’ 1,093 law enforcement agencies, roughly half have yet to begin reporting information to TDEx, according to the DPS.? And smaller and rural law enforcement offices, the DPS tells Mother Jones, often lack the technology required to load information into the system.

Other departments, including those in bigger cities like Dallas and El Paso, say that TDEx has allowed them to conduct investigations more efficiently and and funnel valuable criminal intelligence into federal counterterrorism data centers. DPS also says that initial privacy concerns concerning the system have been addressed.

Scott Henson remains skeptical. “I’ve never heard anyone even remotely claim that any of this information has benefited a criminal investigation, that anything has ever actually been done, as a practical matter in the real world with any of this,” he says. And he insists that a vast network like TDEx represents Perry’s particular knack for taking federal money wherever and whenever he can get it. “Security is something that Perry just throws money at to say, ‘I’m tough.’ But really, it’s about pork. It’s not about pragmatic steps to keep us safer.”