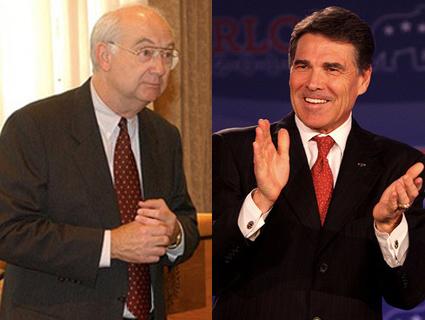 In January 2008, former US Sen. Phil Gramm took the podium at a confab hosted by the conservative Texas Public Policy Foundation to introduce the keynote speaker—and his political protégé. “I feel confident in saying that Rick Perry, in terms of hard achievement, is the greatest governor of my lifetime,” he gushed.

A short time later, stepping up to the mike and grinning broadly, Gov. Perry returned the compliment: “I love Phil Gramm!”

The pair share a lengthy history stretching from Perry’s days as an undergraduate at Texas A&M, where he was one of Gramm’s economics students, to the state Capitol, where the Texas governor’s policies have been significantly influenced by the man he’s called “a mentor to me in Texas politics.”

Most Americans remember Gramm as the grumpy co-chair of John McCain’s 2008 presidential campaign, who resigned over his controversial remark that America was “a nation of whiners” and claim that the country’s economic woes were merely the product of a “mental recession.” It was the very same Gramm, who, just hours before Congress recessed for the Christmas holiday in December 2000, slipped a measure into an 11,000-page bill that deregulated the commodity markets and helped transform Wall Street into a casino. The legacy of “Foreclosure Phil” helped lay the groundwork for the financial tsunami that torpedoed the American economy.

After Perry announced his presidential bid, Gramm quickly endorsed his former student, though it’s unclear if he will play any formal role in the Perry campaign. (Representatives for Perry and Gramm did not respond to requests for comment.) Would Gramm land a job in a Perry administration? Would the policies of a President Perry—like those of Gov. Perry—bear Gramm’s imprimatur?

Gramm has described the two men as “friends and allies and colleagues and warriors together for many years.” Perry has hired former Gramm staffers and appointed them to state commissions and agencies; he also named Gramm’s wife, Wendy, to several commissions and boards. Perry’s son, Griffin, even went to work in the Dallas office of the Swiss bank UBS, where Gramm was hired as a vice president and lobbyist after leaving politics. (Perry’s office has denied that Gramm played a role in his son’s hiring.) Their web of political allies overlaps in countless ways. And lurking behind many of the Perry administration’s most controversial policy ideas—taking out life insurance policies on public teachers, privatizing the state lottery—was Phil Gramm.

When Gramm resigned from the Senate in 2002, Perry, then in his first term as governor, heralded the career of the man he called “my friend.” “In a state filled with tales of legendary statesmen, Sen. Phil Gramm stands in a league of his own,” Perry said. In fact, to Perry, Gramm stood apart from the crowd for other reasons as well. A month earlier, Gramm did the governor the ultimate favor by giving $610,000 to Perry’s campaign. It was, at the time, the largest single-day campaign donation during Perry’s governorship.

By then, Perry had already snapped up Phil Wilson, a former aide to Gramm for nearly a decade. After serving as Perry’s communications director for a year, Wilson moved up to Perry’s inner circle as his deputy chief of staff. The governor also named Wilson his designee to the Texas Enterprise Fund and the Emerging Technology Fund, which critics have decried as “slush funds” used to benefit Perry’s allies and donors.

With an assist from Gramm, Wilson devised one of the more controversial initiatives hatched during Perry’s governorship. His idea to privatize the Texas State Lottery, Wilson later told the New York Times, grew out of a conversation with Gramm, who joined UBS after leaving the Senate.

It was Wilson—later named secretary of state by Perry—who first pitched the privatization idea to the governor. In 2007, Perry floated the plan publicly, claiming Texas could bank $14 billion to $20 billion right away if it leased or sold the lottery. According to Texans for Public Justice, a campaign finance watchdog group, the first bank to submit a lottery privatization plan with the Perry administration was Gramm’s employer, UBS. (A UBS spokesman acknowledged that Gramm was the bank’s point man in the lottery talks, which ultimately fell apart.)

Gramm also played a key role in another controversial deal proposed—and later canned—by the Perry administration. As the Huffington Post recently reported, top Perry aides pitched a plan to allow Wall Street investors to take out insurance policies on retired teachers that paid off when they died. Critics dubbed it the “dead peasants” plan. The deal, as envisioned, could pay off handsomely not only for investors but also the state, which would arrange the bets. The bank at the heart of this morose deal? UBS—with Gramm personally pushing for the deal.

Along with Wilson, a host of other close Perry aides and advisers previously worked for Gramm: Dave Carney, often described as “Rick Perry’s Karl Rove,” got his start in Texas politics in 1993 when Gramm, then chair of the National Republican Senatorial Committee, enlisted the New Hampshire native to work on Kay Bailey Hutchison’s Senate race. Robert Haus, a Des Moines-based political strategist, served as the Iowa campaign manager for Gramm’s 1996 presidential campaign; Haus is currently the co-chair of Perry’s presidential campaign in Iowa. And Bob Schuman, the operative behind the pro-Perry super-PAC Americans for Rick Perry, worked as a regional political director for Gramm’s presidential campaign.

Also helping out Gramm during his presidential campaign was Perry, then Texas’ agriculture commissioner, who was at Gramm’s side when he unveiled his candidacy in February 1995. Years later, Perry would claim that the country “made a huge mistake” by not electing Gramm president. “I can’t fathom,” Perry said, “where we would be as a country had Phil Gramm led this country for eight years.” Gramm never came close to winning the presidency, but he must be proud knowing that Americans are now pondering where we might be as a country if Rick Perry, his protégé, moves into the White House.