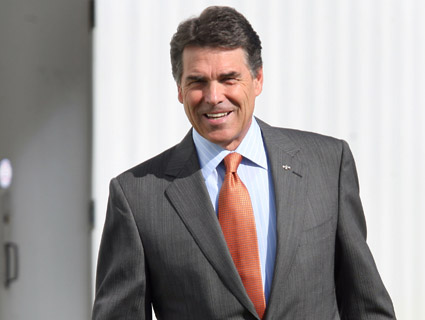 Rick Perry snagged the endorsement of 27 New Hampshire state legislators on Wednesday, passing fellow GOP presidential candidate Mitt Romney, who has endorsements from just 9 Granite State lawmakers. The Texas governor’s campaign was quick to brag about this ally-recruiting coup. “We are honored to have the support of these men and women who represent and understand the sentiments of voters across the state,” said Paul Young, a senior adviser for Perry. But some of Perry’s new supporters have made headlines for the wrong reasons—including for claiming New Hampshire “sold” children to gay couples and for slamming college students as “transient inmates.”

One of Perry’s New Hampshire endorsers, state Rep. Al Baldasaro, sparked an outcry in 2010 when he compared adoption by same-sex couples to child trafficking. New Hampshire passed a law in 2008 permitting unmarried same-sex couples to adopt children. Afterward, Baldasaro testified before a legislative committee that New Hampshire “sold each kid to a homosexual couple that’s not married for $10,000.” Baldasaro later apologized, called the statement “a bad choice of words,” and claimed he was referring to federal money received by the state to cover adoption costs.

Another Perry endorser, GOP state Rep. Gregory Sorg, publicly supported a bill that would ban college students from voting in elections in their college towns. (The bill drew large opposition from New Hampshire students, the League of Women Voters, and the secretary of state.) But it was Sorg’s description of college students that caught the eye: He disparaged them “transient inmates…with a dearth of experience and a plethora of the easy self-confidence that only ignorance and inexperience can produce,” the Union Leader reported.

GOP state Rep. Ralph Boehm attracted headlines in January when he voiced opposition to New Hampshire schools adopting new national curriculum standards. Boehm said the standards, which would ensure a minimum base of knowledge in math and English at each grade level, amounted to more overreach and meddling by the federal government. (The US Department of Education didn’t develop the standards, but it urged states to sign on.) “It comes down to local control and unfunded mandates,” Boehm said, according to the Nashua Telegraph. “It’s causing local districts to spend money on learning what the common core is, and it’s also going to cost additional money for new books and stuff like that.”

And finally there’s GOP state Rep. Kenneth Weyler. In a March debate over cuts to state mental health institutions, Weyler claimed mental care providers want sick people to be “patients for life” and suggested that slashing funding could somehow cure the mentally ill. “By cutting the amount of help we’re willing to offer, we’d like them to discover that some of these people can be cured,” he said, according to the Concord Monitor. “You shouldn’t keep them just so you can keep your revenue coming in.”

Putting these legislators on an endorsement list could have been a vetting mistake. But Perry needs all the support he can get in New Hampshire. A Suffolk University-7 News poll released Wednesday showed Mitt Romney with the support of 41 percent of respondents, putting him a commanding 27 points ahead of the next closest Republican presidential candidate, Rep. Ron Paul (R-Texas). Perry recorded only 8 percent support, although he fared better in a mid-August poll by the right-leaning Magellan Strategies. In that poll, he placed second with 18 percent, still trailing Romney, who took the top spot with 36 percent.

Perry isn’t the first presidential candidate to court controversial New Hampshire conservatives; in June, Mother Jones reported that former candidate Tim Pawlenty’s campaign organized a party at the house of a conservative activist who called President Obama “a jungle alien” and climate change “bullshit.” But as the Texas governor battles Romney for the hearts of New Hampshire Republicans, he’ll no doubt woo more lawmakers to join his cause. After all, New Hampshire’s state Legislature, at 424 members, is the largest in the nation—and the endorsements of some 250 Republicans are still up for grabs.