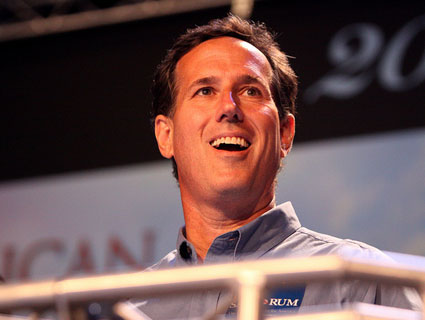 Alex Nicholson, a former Army Intelligence Officer who was discharged under Don’t Ask, Don’t Tell and was one of the plaintiffs in Log Cabin Republicans v. United States, harshly criticized Former Pennsylvania Senator Rick Santorum for his remarks on DADT during Thursday night’s GOP Presidential debate. When a gay soldier serving in Iraq, Steven Hill, asked the candidates whether they would reinstate DADT, Santorum expressed his support for doing so, saying that ending the policy granted gays and lesbians “special privileges.”

“Rick Santorum has never volunteered to serve our country for one single day in uniform. With the number of armed conflicts in which our country has been engaged throughout his lifetime, he has never volunteered to trade his loafers for combat boots or his briefcase for a rucksack and share in the burden of taking up arms to defend this country,” Nicholson said. “Stephen Hill has not only done that, but he was actually doing it in Iraq at the very moment when [Santorum] chose to take cheap political shot at Hill and at over 1 million gay and lesbian servicemembers and veterans who have actually volunteered to serve their country in uniform…. Men and women in the military have a term for people like Rick Santorum – Blue Falcon. He should Google it.” (The term refers to people who create problems they leave for others to solve.)

As my colleague Tim Murphy noted, not only were there scattered boos in the audience in response to Hill’s question, but not a single candidate on stage thanked Hill for his service or responded negatively to the boos. In a follow-up appearance on Fox News on Friday, Santorum said he hadn’t heard the boos from the stage and that “I condemn the people who booed that gay soldier…I thank [Hill] for his service to our country. I’m sure he’s doing an excellent job. I hope he is safe, and I hope he returns safely, and does his mission well.”

Nicholson, now Director of Servicemembers United, an advocacy group for gay and lesbian soldiers and their families, was discharged after a colleague read a letter he had written to a former boyfriend—the letter was written in Portugese to avoid it being casually discovered—and revealed to others in his unit that Nicholson was gay. Asked whether he was disappointed by the silence of the other candidates, Nicholson merely shrugged that, “I think in order to be disappointed you first have to have an expectation. I had no expecatation that most of these candidates would put themselves out on a limb on this issue beyond the statements that some have given that it is a settled issue.”