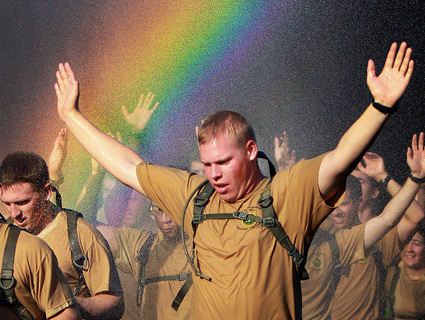 Don’t Ask, Don’t Tell is dead. But the fight for equality in the military is nowhere near finished. While the official end of DADT at midnight on Monday is a historic turning point, unresolved issues with the Defense of Marriage Act (DOMA) and military regulations mean that service members and their partners in same-sex relationships will continue to suffer second-class treatment.

Stephen Peters knows what it’s like to live a lie, both as a serviceman and as a serviceman’s partner. In 2007, he was discharged under DADT after informing his commanding officer that he was gay. Peters had just reenlisted in the Marines—but he didn’t want to hide who he was anymore.

“I had a picture of a girl from back home that I was friends with, and I’d tell people she was my girlfriend. I’d make up stories about when I went out with my friends on the weekends, creating this persona that doesn’t exist,” Peters says. “I just went to my company commander and explained to him that I happened to be gay and I didn’t want to get out; I wanted to continue to serve, but I didn’t want to have to create those daily lies.”

He was distraught over his discharge—as was some of his conservative, religious family—but at least he would no longer have to pretend. Then he fell in love with another Marine.

“It was like going back into the closet,” Peters says. “I’d have to go to work and pretend I was single, pretend I didn’t have a family.” Staying on a direct career path was hard, because his partner getting a new assignment meant he’d have to abruptly pick up and leave. “When I had to quit, I’d have to make up some crazy excuse why I was moving halfway across the country without having another job.”

As of Tuesday, Peters won’t have to hide his life from his coworkers anymore and neither will his partner. But many of the hardships that he and other same-sex partners of service members have faced will remain, because of legal restrictions that prevent same-sex couples from receiving the same benefits that married, heterosexual service members get. That includes health care benefits, help finding work, and financial assistance that eases the difficulty of moving and paying for a new home. Same-sex couples won’t be eligible for the additional pay given to partners when a service member is given an assignment that prevents his or her family from coming along. They won’t have access to family-support services provided by the military that often serve as crucial conduits of information regarding what forms of assistance are available and how to take advantage of them.

And, when a service member makes the ultimate sacrifice, his or her partner will be denied the same financial support that heterosexual families receive. Unless the two had children together, the partner may not even be the first to know about the death.

“We still have to go through the sacrifice of giving up jobs, houses, families and friends,” says Laurence Watts, whose long-term partner is in the Navy. “But we don’t get the safety net that’s there to make sure that kind of responsibility doesn’t drive you crazy.” Watts’ situation is also unique because he’s a British citizen, which meant an even more difficult scenario: When his partner was deployed to Afghanistan, he had to move back to Great Britain. Noncitizen spouses of heterosexual service members are on the fast track for a green card—but first DADT and now DOMA prevent same-sex partners from having the same privileges.

DOMA, which prevents the federal government from recognizing same-sex marriages, is to blame for some of this. (The Obama administration concluded in February that DOMA was unconstitutional and has ceased defending it in court, but it remains in force.) In June 2009, President Obama directed federal agencies to extend as many benefits as possible to same-sex couples. But for service members, slightly different legal language governing the military prevents the Department of Defense from doing what the State Department—whose employees have similar obligations in terms of being forced to relocate—were able to do in extending as many benefits as possible to families headed by same-sex partners.

There is a separate category of benefits, known as “member-designated” benefits, which are not prohibited by DOMA from being extended to same-sex couples. These include life insurance and defined-contribution retirement savings plans, and gay and lesbian service members can now designate their partners without fear of discharge. Nevertheless, Alex Nicholson, a former Army Intelligence Officer who is now the Executive Director of the gay and lesbian service member advocacy group Servicemembers United, says the Defense Department could do more despite the legal barriers erected by DOMA. “They’re not going as far as they could,” Nicholson says. “There’s more that they could do even before DOMA is repealed.” McKean agrees.

A Defense Department spokesperson said that DOD was looking into extending more benefits to the partners of gay and lesbian service members, including access to Morale, Welfare, and Recreation facilities, which would allow them to utilize things like swimming pools, golf courses, and restaurants normally offered to families of service members on bases.

Nicholson and McKean say that one crucial issue is how DOD deals with the question of military identification and base access. When Watts’ partner had to be hospitalized for a medical emergency, Watts couldn’t simply visit him. Watts had to rely on another friend in the service to get him on base every day. Even without DADT, current DOD regulations state that only “dependents” can get military IDs, and DOMA prevents the same-sex partners of service members from being designated as dependents. Which means that even though Watts and his partner will no longer have to hide their relationship, he and other same-sex partners of service members will still have similar problems unless DOD changes its regulations. That doesn’t just apply to hospital visitation; it means that, unless the couple has a child who can be designated as a dependent, the same-sex spouse or partner of a service member doesn’t have the access to base housing, commissaries, or base exchanges that their straight counterparts do.

Still, even with the remaining obstacles, Peters and Watts were glad about no longer having to go through the stress of hiding their private lives from friends and colleagues.

“It’s a huge relief,” Peters says. “I’ve had to serve, and he’s had to serve for all these years…with this threat of being kicked out because of your sexual orientation. And that threat’s finally gone.”

Dr. Aaron Belkin, author of How We Won: Progresssive Lessons From the Repeal of “Don’t Ask, Don’t Tell,” says that with DADT gone, DOMA, and the hardship it continues to place on the families of gay and lesbians service members, may not be long for this world either.

“If you look at the countries around the world that have marriage equality, the lifting of the military ban almost always comes first,” Belkin says. “[It] sends a very powerful message that it’s wrong to discriminate and that gays and lesbians are first-class citizens and deserve the same rights as everybody else.”

In the meantime, service members in same-sex relationships will still have to make do with less.

“You don’t let it stop you from loving someone,” Watts says. “You just learn to deal with it.”