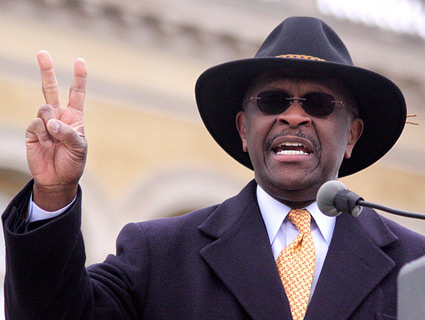 Herman Cain is on a hot streak. On Saturday, the former Godfather’s Pizza CEO and current GOP presidential nomination hopeful won a Florida straw poll. A few days earlier, he put in a strong showing at the Fox-Google debate, claiming (misleadingly) the stage IV cancer he contracted in 2006 would have killed him had “Obamacare” been in place at the time.

Cain didn’t get into specifics of how he might fix the health care system—and with answers limited to 60 seconds, he didn’t have much of an opportunity to do so. But when Cain did go long on policy, in his 1997 book, Leadership Is Common Sense, he didn’t propose changing the delivery of medical services or reforming the health insurance industry. Instead, his No. 1 prescription for dealing with health care was for patients to adjust their attitudes. His model for doing this? An anti-littering campaign from the 1960s.

Cain wrote his book after he first arrived on the national political scene back in 1994, when he confronted President Bill Clinton on television during a town hall meeting. Cain became a national media sensation when he asked Clinton what he should tell all the people whose jobs he’d have to eliminate because of the president’s health care plan.

In his book, Cain got a chance to lay out what he would have done if he’d been in charge of the country and needed to deal with health care. His alternative? Lady Bird Johnson’s “Keep America Beautiful” campaign. Cain writes in his book that the main problem the United States has with health care is one of attitude, and the former first lady’s anti-littering campaign was a stellar example of how an advertising campaign to change national attitudes can have a significant impact on behavior.

How this would work in the health care context is somewhat vague. Cain’s attitude-changing campaign would encourage preventative care (or “don’t get sick,” as former Florida Democratic Rep. Alan Grayson famously quipped of standard GOP health care plans). It would also somehow demonstrate that “we all pay” and demonstrate what “we all can do to reduce the system costs.” Cain doesn’t actually explain what, if anything, individuals could do to reduce the system costs besides not getting sick. He merely writes:

The biggest problem with our health system is not the quality of our medical care, but the public attitude that health care is “health care.” It is not “health care,” it is “sick care” because many people don’t care until they get sick. This mindset is the result of years of public and private conditioning that if you have health care insurance then you are not paying for your “sick care” when you get sick. In fact, we are all paying for it and the cost of medical care abuses. We must first change the national mindset before we change behavior.

One wonders whether Cain has changed his mind about “sick care” now that he’s actually been sick, a problem that even his demonstrably positive attitude couldn’t prevent. Although now cancer free, Cain is lucky in more ways than one: He is old enough for Medicare but also rich enough to buy extra insurance. Left to the whims of the private sector, Cain, with his history of cancer, would be uninsurable—a problem that would remain untouched by a Lady Bird Johnson/Weeping Indian campaign. He never mentions just how much his health insurance premiums are.

Cain’s current campaign website makes no mention of Lady Bird Johnson. His health care proposals are pretty thin on details. He calls for more “patient-centered” and free-market reforms. He embraces restrictions on malpractice lawsuits, including a “loser pays” system that would require the losing party to pay the other side’s legal costs, a practice that’s never been demonstrated to reduce medical costs. Overall, his “think different” approach to health care isn’t much different from the standard GOP talking points. Unfortunately, the health care system is going to need a lot more than a few minor tweaks, a public service campaign, and some positive thinking to ensure that everyone with stage IV cancer can get the same sort of treatment that Herman Cain did.