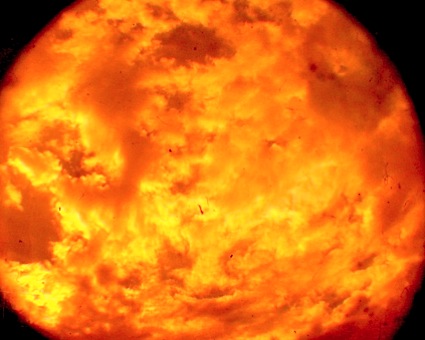 As I reported last month, the CIA’s Center on Climate Change and National Security has been keeping a low profile—probably because Republican members of Congress have been trying to ax the program. But apparently the CIA is going so far as to keep all information about the program classified, Secrecy News reported.

The CIA categorically denied a request under the Freedom of Information Act for copies of studies or reports from the center on climate change impacts. Jeffrey Richelson, an intelligence historian with the National Security Archive, filed the FOIA request. And while it’s conceivable that some of the work the center is doing should be classified, it seems rather unreasonable that all if their work should be secret.

Steven Aftergood of Secrecy News summed up the problem with this approach:

The CIA response indicates a fundamental lack of discernment that calls into question the integrity of the Center on Climate Change, if not the Agency as a whole. If the CIA really thinks (or pretends to think) that every document produced by the Center constitutes a potential threat to national security, who can expect the Center to say anything intelligent or useful about climate change? Security robots cannot help us navigate the environmental challenges ahead. Better to allocate the scarce resources to others who can.

This is an issue that came up repeatedly in my reporting on the center. Several people in the national security community raised the question of whether our traditional intelligence-gathering programs are really the best way to deal with climate change and national security, for a lot of good reasons. Climate change is a threat much different than traditional security concerns, and the agency’s experts might not be the best suited for looking at it. It’s an international problem, and addressing it will require more openness, cooperation, and transparency with other nations and stakeholders, not less of it. And the sea level rise, droughts, famines, and extreme weather events associated with climate change aren’t exactly secrets.

The agency’s strategy, in light of attacks from climate skeptics, seems to be to lay low and hope no one notices them. (Trust me, I tried desperately to get info about the program for my story last month, to no avail.) But that makes it practically impossible to publicly justify the program’s existence, given that we have no idea what they’re up to over there.