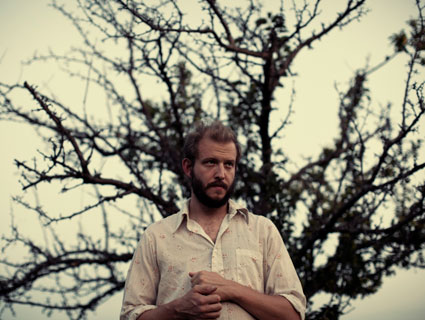 For a man whose path to musical success started with him alone, sick with pneumonia and a broken heart, in a hunting cabin in the woods of Wisconsin, Bon Iver’s Justin Vernon has become quite the rockstar. Since 2008, when Jagjaguwar Records released his debut indie-folk album, For Emma, Forever Ago, he’s been lauded by critics, adored by fans, and even sought out by Kanye West, who asked him to collaborate on West’s latest album, My Beautiful Dark Twisted Fantasy.

But even now, Vernon doesn’t have many of the standard trappings of a music god. Tall and bearded, he looks more like a dude you’d find drinking PBR in a small-town bar more than a guy you’d expect to see touring big venues in support of his second album. Vernon seems to feel that way a little, too. Facing the sold-out crowd at Berkeley’s Greek Theatre last Thursday, he kept on repeating how awed and lucky he was to be there.

“You know when you’re a kid, and you’re shooting hoops in your driveway, and you imagine what it would be like to hear the sound of people cheering for you? Well, this is what that sounds like,” he told the cheering crowd.

Accompanied by an eight-piece band—whose members he took the time to individually introduce—Vernon has come a long way from the stripped down, emotionally bare sounds of his first album, which he recorded almost entirely on his own in the aforementioned cabin. His new self-titled album is much more sonically layered, and came to life onstage in a jazzy, sometimes synth-heavy, yet still folksy cacophony. The new songs are bigger, bolder, and more complex than his earlier stuff. But as Vernon and his band transitioned between the two styles, he was able to maintain that sense of absorbing intimacy on For Emma’s songs like “Skinny Love”—”Come on skinny love just last the year/Pour a little salt, we were never here.”

Of For Emma, Vernon said, “It was the most honest thing I’ve ever done.” It’s this humble, vulnerable honesty that kept the crowd of 8,500  enraptured. When he sang, “This my excavation and today is Kumran/Everything that happens from now on,” from “re: Stacks,” the crowd, lit up by cell-phone screens recording the performance, hung on his every note.

When Vernon came back for an encore and played “Skinny Love,” the crowd screamed with a fervor you’d expect for, say, Kanye. Leaving the venue, a concertgoer clutching a set list like a prized possession told me it had been the best show of his life. Maybe it’s because when Vernon sings things like, “And at once, I knew I was not magnificent,” from “Holocene” the standout song on the new record, we can all relate.