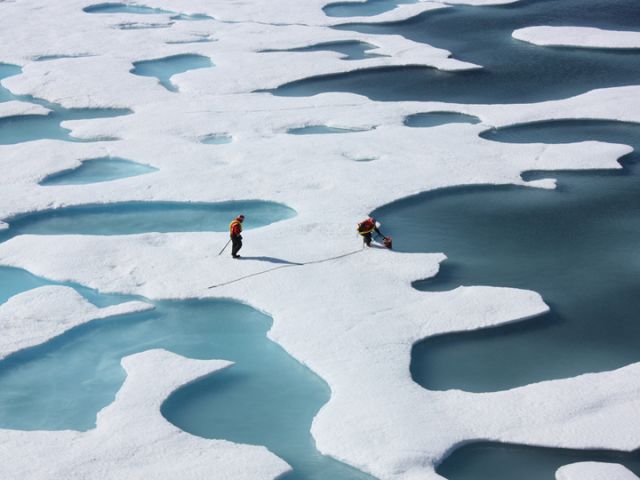 Ice ponds atop the melting Arctic Ocean. Credit: NASA photograph by Kathryn Hansen.As autumn approaches, the National Snow and Ice Data Center (NSIDC) reports that Arctic sea ice is near or at its seasonal low.

So how did 2011 fare? Well, the data are still being collected. But according to the NSIDC algorithm, this year’s minimum is unlikely to surpass 2007’s record low: 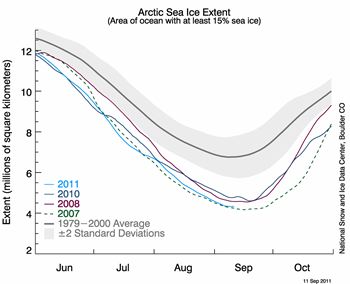 However a different algorithm used by the University of Bremen concludes this year beat out 2007 for the lowest sea ice extent ever recorded. Here’s what NSIDC has to say about the finer resolution of the Bremen calculations:

The University of Bremen employ an algorithm that uses high resolution information from the JAXA AMSR-E sensor on the NASA Aqua satellite. This resolution allows small ice and open water features to be detected that are not observed by other products. This year the ice cover is more dispersed than 2007 with many of these small open water areas within the ice pack. While the University of Bremen and other data may show slightly different numbers, all of the data agree that Arctic sea ice is continuing its long-term decline. 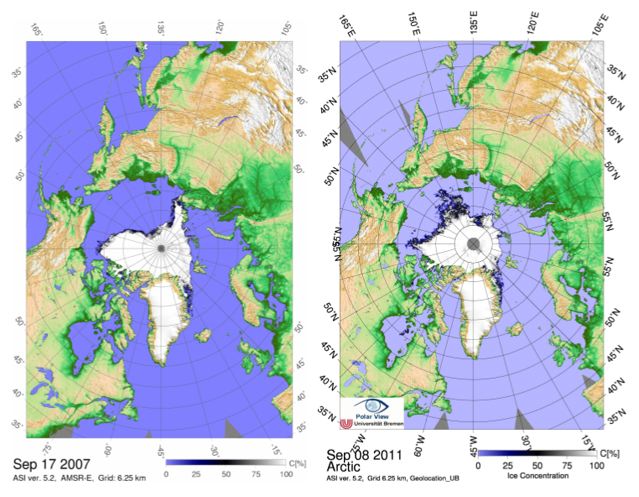 Sea ice concentration maps of the minimum on 17 Sept 2007 and of the first day of historic minimum on 8 Sept 2011. The 2011 sea ice minima could reduce further in the next days. Credit: University of Bremen.In the image from Bremen above you can see the nature of the lowest ice extent appears differently in the two years—with 2007 presenting as a consolidated pack, and 2001 as a scattered one. As Bremen (pdf) points out, this year’s record low is likely the lowest extent since the end of the last Ice Age:

The extent of the Arctic sea ice shows a pronounced yearly cycle, with about 15 million km2 in March and five million km2 in September. In 2007 however, it was only 4.267 million km2, the previous smallest value since start of satellite observations in 1972, and most probably since the last climate optimum about 8000 years ago. The current value is 27,000 km2 or 0.6% lower and could even be undercut in the next weeks. 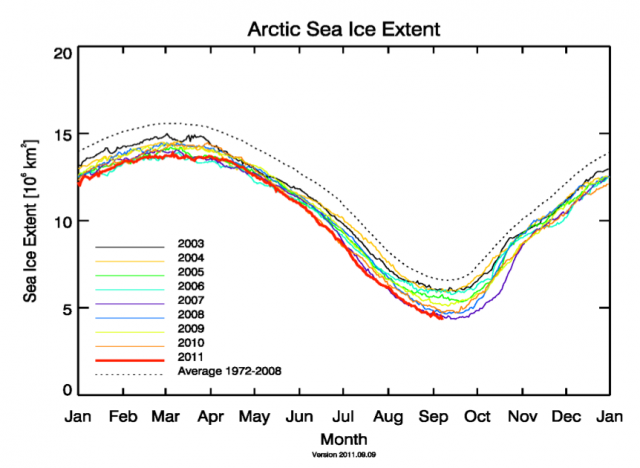 Sea ice extent of the years 2003 to 2011 with minima in September and maxima in March. Credit: University of Bremen.In the shipping news, retreating sea ice opened the Northwest and Northeast passages simultaneously in 2011—following the first ever dual openings in 2008 and 2009. Consequently this year the northern crossing was made in record time—only 8 days—by a tanker travelling from Houston to Thailand.

The Bremen report sums up the impacts of years of dwindling ice cover:

The retreat of the summer sea ice since 1972 amounts to 50%. For algae and small animals living at the lower side of the ice, less and less living environment remains since they need a certain time to settle there. They are at the beginning of the food chain for fishes, mammals and also man. 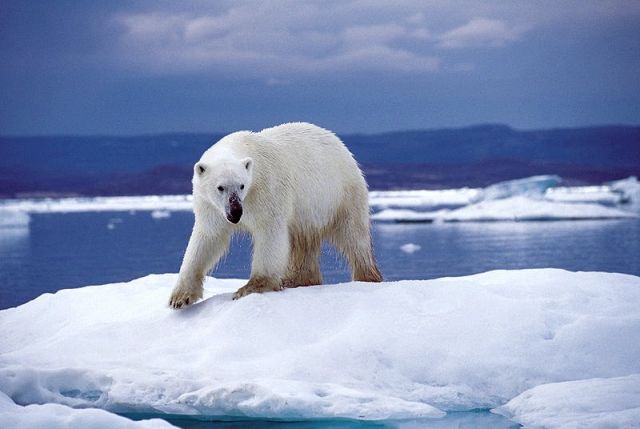