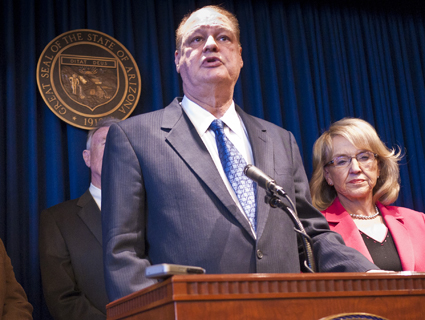 On Wednesday, the US District Court for the District of Columbia threw out a challenge to the Voting Rights Act (VRA) mounted by a coalition of conservative legal groups from Shelby County, Alabama. The group sought to render unconstitutional Section 5 of the VRA, which requires states with ugly racial histories—like Alabama—to pre-clear any proposed changes to their election laws with the Department of Justice in order to assure that minority voting rights aren’t being trampled. Pre-clearance, Shelby County argued, amounts to a violation of states’ rights. The court didn’t agree.

The Shelby County decision, authored by George W. Bush appointee John Bates, doesn’t bode well for a similar suit filed by Arizona Attorney General Tom Horne in August. The Grand Canyon state was inducted into the pre-clearance gang in 1975 for failing to publish ballots in Spanish.

In an interview with Capitol Media Services on Wednesday, Horne admitted the odds are against Arizona. His suit draws on many of the same arguments presented by the plaintiffs in the Shelby County case; moreover, the same judge, Bates, will be presiding over the Arizona case. But Horne believes that his case has a shot in front of the Supreme Court, and doesn’t think that Arizona’s current voting laws discriminate against minorities, telling Capitol Media Services that “there is no evidence of ongoing problems” in Arizona.

Only a little over half of all eligible Latinos were registered in 2008. Maybe the others were scared off by imposing white men sporting black t-shirts emblazoned with this logo and demanding proof of citizenship from Latinos waiting in line to vote. Yes, that really happened.

As for other shining moments in Arizona racial history, Horne decided to dredge up an oldie-but-a-goodie:

[T]he approval by lawmakers last year of SB 1070 is not a sign of ongoing racism in Arizona. Instead, he said, it is designed solely to give state and local police more power to enforce laws against illegal immigration.

Horne said one of the best pieces of evidence he has that Arizona does not discriminate against Hispanics is the fact that voters here elected Raul Castro as governor in 1974. Anyway, he said, including Arizona in the preclearance requirement of the Voting Rights Act is a form of discrimination itself.

“There is data that show that Arizona has as perfectly as good a record as lots of state that are not covered” by [Section 5 of the VRA].

It’s not clear what data Horne is referring to. Nor is it clear why he didn’t let a sleeping dog like SB 1070 lie. Also notable: Raul Castro (not that one), whose term as Arizona governor expired almost 35 years ago, was elected six months before the state was ordered into the pre-clearance club because of its Spanish-language ballot problem. (Latinos, theoretically, could’ve pretty ably voted for a guy with a name like Raul Castro whether or not a Spanish-language ballot was available.) The state has not had a Latino governor since.