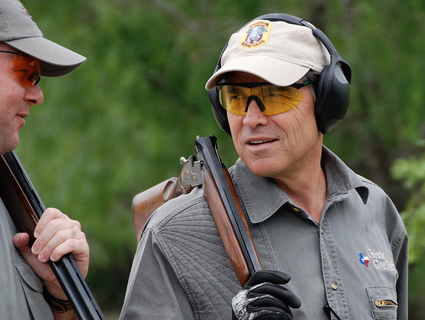 Rick Perry’s first week on the campaign trail was, it’s pretty safe to say, an eventful one. Last Saturday, the Texas governor officially entered the GOP presidential race with a pledge to make “Washington, DC, as inconsequential in your life as I can.” On Sunday, he alleged that the United States military does not respect President Obama. On Monday, he threatened to murder (or something) the Republican-appointed chairman of the Federal Reserve. On Wednesday, he blew the whistle on an international conspiracy by climatologists to secure more money for research grants. On Thursday, he disclosed that the earth was “pretty old” and that creationism should be taught in public schools.

Perry, Texas’ governor since the last days of the Clinton administration, has taken the race by storm, soaring to the top of the polls in Iowa and throwing conservatives into a tizzy as to whether he’s really cut out to lead the Republican party forward. So who is Rick Perry, anyway—and what has he done to Texas?

We combed the Internet to bring you our favorite deep dives on the GOP’s new pony—and the people and events that made him. Enjoy:

“Trial by Fire,” David Grann, The New Yorker: Cameron Todd Willingham was executed via lethal injection in 2004 for murdering his wife and three kids via arson. There was one serious problem: It now appears almost certain that Willingham was innocent. Perry, who presided over more executions than any governor in modern American history, declined to grant a stay to Willingham when presented with evidence that his case had been mishandled and key evidence was ignored. When the Texas Forensic Science Commission seemed on the verge of concluding that the fire might not have been arson after all (after taking the unprecedented step of re-examining the case), Perry promptly replaced three of its members. Grann painstakingly details the 12-year process by which Texas, under Perry’s watch, killed an innocent man—and the effort he took to sweep it under the rug. The New Republic‘s Jonathan Chait calls this piece, “the single greatest piece of journalism I have ever read in my life.” See also: “Innocence Lost,” Pamela Colloff, Texas Monthly—in which a reporter succeeds in freeing a man who spent 18 years on death row for a crime he didn’t commit.

“The NAFTA Superhighway,” Chris Hayes, The Nation: “When completed, the highway will run from Mexico City to Toronto, slicing through the heartland like a dagger sunk into a heifer at the loins and pulled clean to the throat. It will be four football fields wide, an expansive gully of concrete, noise and exhaust, swelled with cars, trucks, trains and pipelines carrying water, wires and God knows what else. Through towns large and small it will run, plowing under family farms, subdevelopments, acres of wilderness.”

At least, that’s how Hayes’ conspiracy theorists—which include the Montana Legislature and at least one member of Congress—saw it. Hayes cuts through the myths surrounding the Trans-Texas Corridor, one of Perry’s most ambitious and controversial proposals in his decade as governor—and one that helped spawn a conservative insurrection in the 2010 gubernatorial primary.

“Bob Perry Needs a Hug,” S.C. Gwynne, Texas Monthly: No one in America has given more money to Rick Perry over the last decade than Texas homebuilder and Swift Boat financier Bob Perry (no relation): $2.5 million. Perry the builder, whose business success is heavily dependent on cheap immigrant labor, is widely seen as a driving force behind the governor’s relatively moderate approach to curbing undocumented immigration. Gov. Perry has been accused of being a corporatist and not an ideologue; his relationship with Bob Perry is a testament to that.

“Revisionaries,” Mariah Blake, Washington Monthly: Texas public schools don’t officially push creationism on students as Perry suggests, but it’s not for lack of effort. Blake profiles one of Perry’s most controversial appointments, his selection of a creationist dentist to chair the State Board of Education, tasked with setting the curriculum standards for classrooms across the state.

Don McLeroy is a balding, paunchy man with a thick broom-handle mustache who lives in a rambling two-story brick home in a suburb near Bryan, Texas. When he greeted me at the door one evening last October, he was clutching a thin paperback with the skeleton of a seahorse on its cover, a primer on natural selection penned by famed evolutionary biologist Ernst Mayr. We sat down at his dining table, which was piled high with three-ring binders, and his wife, Nancy, brought us ice water in cut-crystal glasses with matching coasters. Then McLeroy cracked the book open…

“Rick Perry’s Army of God,” Forrest Wilder, Texas Observer: Before he announced his run for president Rick Perry held a massive prayer and fasting festival at an NFL stadium in Houston. You may have heard. Wilder provides valuable background on Perry’s allies on the religious right—specifically a radical new movement known as the New Apostolic Reformation.

On September 28, 2009, at 1:40 p.m., God’s messengers visited Rick Perry. On this day, the Lord’s messengers arrived in the form of two Texas pastors, Tom Schlueter of Arlington and Bob Long of San Marcos, who called on Perry in the governor’s office inside the state Capitol. Schlueter and Long both oversee small congregations, but they are more than just pastors. They consider themselves modern-day apostles and prophets, blessed with the same gifts as Old Testament prophets or New Testament apostles. The pastors told Perry of God’s grand plan for Texas. A chain of powerful prophecies had proclaimed that Texas was “The Prophet State,” anointed by God to lead the United States into revival and Godly government. And the governor would have a special role.

“Right Place, Right Time,” Paul Burka, Texas Monthly: This one’s politics, plain and simple. Burka, one of Texas’ most respected political analysts, explains what makes Perry tick, and makes the compelling case that the governor has been preparing for his presidential run for years.

Most people who follow Texas politics know by now the conventional wisdom about Perry: that he is an accidental governor who inherited the job when George W. Bush became president; that he is “Governor Goodhair” or “Governor 39 Percent” or some similar appellation of mild disrespect accompanied by a twist of humor; that he doesn’t really do anything well except win elections, which he has done with regularity. There is truth in the conventional wisdom, but there is also blindness. Perry has been so often viewed as a caricature that many Texans have failed to recognize his talent.