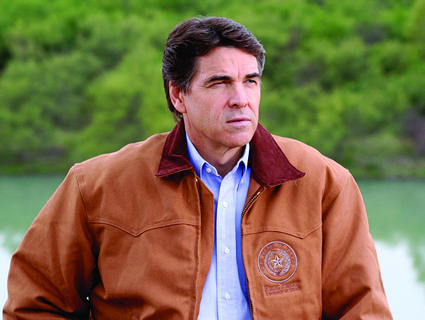 When I contacted Rick Perry’s campaign (and the Texas governor’s office) last week for a story about the presidential candidate’s favorite books, I never heard back. But in an effort to quell notions that Perry is “dumb”—it’s a theory that’s out there—the campaign gave Jonathan Martin a glimpse at what’s currently on the governor’s reading list. It doesn’t really prove or disprove the “dumb” thesis, but it’s interesting in its own right:

In an illustration that Perry knows what he needs to know, his spokesman said the governor is currently reading Henry Kissinger’s recent China book – “On China.”

And that’s not the only practical guide the governor is thumbing through.

Mark Miner, the spokesman, said Perry is also reading Charles Stanley’s “Turning the Tide,” a Baptist pastor’s how-to for Christian conservatives who want to change the country’s direction, and the Bible. Perry also carries an Apple laptop as well as an iPad with him on the road, said Miner, who called his boss “an avid reader.”

Emphasis mine. Stanley’s an interesting choice here. Like Perry, Stanley believes America is a Christian nation founded on Biblical principles, and that the further the nation gets from those precepts, the worse things will get. (The “tide” he mentions in the title is actually a “tsunami” of death and depravity that we’re running out of time to thwart.) Part of the problem, Stanley explains, stems from the nation’s march toward socialism, which challenges the primacy of religion as a moral code, and incentivizes laziness. That’s pretty standard fare on the religious right, and helps explain how tea party economics can mesh so easily with evangelical precepts; as it happens, Michele Bachmann’s favorite theologian, Francis Schaeffer, blamed government handouts for the fall of Rome. As Stanley writes, “Because there is no reward for working harder—and there are also no consequences for poor performance—people do the least they can do to get by.”

His arguments on the will of the Founders and the Biblical basis of the Constitution dovetail very neatly with those of Mormon historian W. Cleon Skousen, whom Perry has also cited as a must-read. Actually, they dovetail very nicely with what Perry himself has said: “natural law, God’s law, is the basis of our nation’s laws.” And then there’s this: In a section on terrorism, he urges readers to “Pray for God’s protection against terrorism and ask that Muslims throughout the world will come to know Jesus as their Savior.” (You’ll remember that Perry’s prayer rally in Houston, The Response, came under fire when organizers stated that their goal was to convert people of other faiths.)

Anyway, here’s an interview with Stanley explaining how “we will experience a political, a social, and a religious tsunami in America,” and what that will look like exactly:

Perry has been hit pretty hard because he associates with some fairly radical members of the religious right. This latest revelation is a sign that 1) those criticisms were pretty much spot-on and 2) he doesn’t really care.